United Nations signs "Declaration of the Seven Laws of Noah" 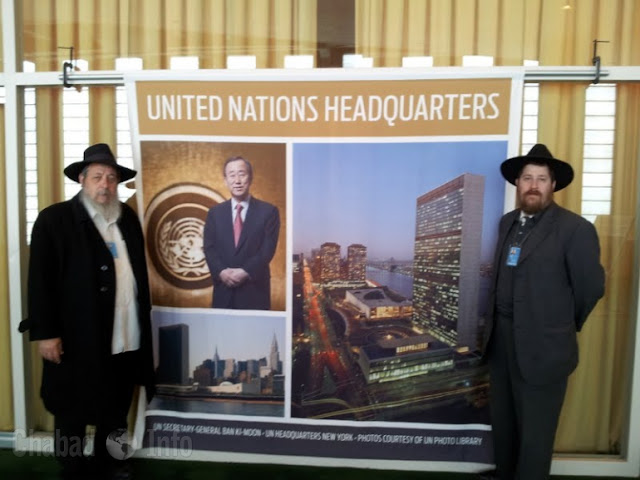 NOVEMBER 9, 2015 SUMMIT AT U.N. HEADQUARTERS
Hosted by the Mission of Panama to the United NationsCo-sponsors: Inter-Parliamentary Coalition for Global Ethics

Uniting the United Nations with Seven Noahide Laws Diplomats,
Delegates, and Emissaries Gather at UN Headquarters for "One People, One World" Conference

UNITED NATIONS, New York (June 10, 2013) – On the heels of the Lubavitcher Rebbe's 19th Yahrtzeit, members of the UN Diplomatic corps, UN Press Officers, and and other officials gathered at the UN headquarters in New York to learn how the Seven Noahide Laws must play a key role in international efforts for world peace.

"On this day, people from all over the world gathered on behalf of the Laws of Noah," said Rabbi Yakov D. Cohen, head of the Institute of Noahide Code, which sponsored the conference. "Their observance is required, so that the vision of the United Nations—to have a settled and civilized world, filled with economic justice and righteousness—will prevail."

Titled "One People, One World," the conference brought together journalists, diplomats, and delegates from countries across the globe – including Egypt and Israel. Guests of honor from the UN Diplomatic Corps also signed a "Declaration of the Seven Laws of Noah," which emphasized the importance of the Seven Noahide Laws in maintaining peace, justice, and harmony among peoples and nations.

In his remarks at the event, Rabbi Cohen discussed how monotheism – uniting the world under the one true G-d – is essential for breaking down barriers between cultures. Looking around the room – filled with faces reflecting the diversity of the United Nations itself – Rabbi Cohen insisted that we must work together in bringing the international community to a higher level of spiritual understanding of man's place in the universe.

Other speakers at the event included Cartell Gore, President of the Booker T. Washington Business League, and Richard Dawson, Director of Dawson Associates International, who insisted that all Jews are obligated to teach the Seven Noahide Laws.

The Institute of Noahide Code is a UN-accredited NGO dedicated to spreading awareness of the Seven Noahide Laws, which all peoples of the world are obligated to follow. It takes its guidance from the inspiring vision of the Lubavitcher Rebbe, who understood the inherent power of these laws to unite the nations of the world.
Posted by Just Another Hindu at 5:51 PM