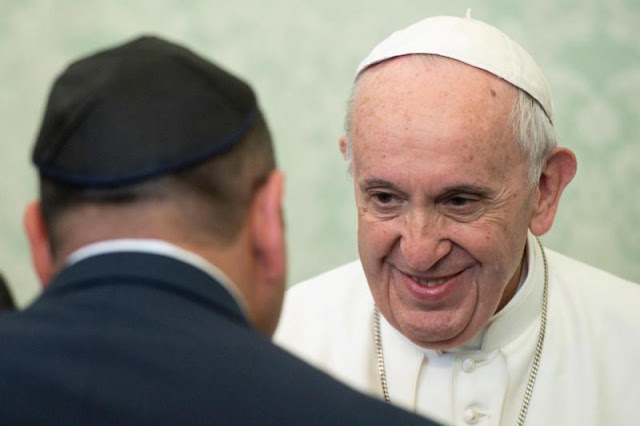 In March of 2007, Vatican Cardinal Jorge Mejia met with Haifa Chief Rabbi Shear Yashuv Cohen to note the significance of the number 7, especially in reference to the 7 laws of Noah and indicating "fullness and maturity".  This  "DELEGATION OF THE HOLY SEE'S COMMISSION FOR RELIGIOUS RELATIONS WITH THE JEWS" signed a scroll stating that there are limits on human freedom and it is the Talmudic Noahide Laws which are incumbent upon all of humanity. Remember, Public Law 102-14 states there will be signings of international scrolls endorsing the Noahide Laws. The Noahides Laws limit freedom of religion, freedom of speech, and freedom of sexual expression on pain of death, is this really what the Vatican is endorsing?

1. At the seventh meeting of the above commission, held in Jerusalem, the chairmen Cardinal Jorge Mejia and Chief Rabbi Shear Yashuv Cohen noted the significance of the number seven within the biblical tradition as indicating fullness and maturity. They expressed the hope that the fullness of the relationship between the Catholic and the Jewish members of this commission will be a source of blessing to both faith communities and the world at large.

Cardinal Mejia also noted the recent passing of Cardinal Johannes Willebrands former president of the Holy See's Commission for Religious Relations with the Jews and a central figure in the historic transformation in Catholic-Jewish relations. May his memory always be for a blessing.

2. The subject of the meeting was the Freedom of Religion and Conscience and its Limits. The human capacity to choose is a manifestation of the Divine Image in which all people are created (cf. Gn 1: 26-27) and is foundational for the Biblical concept of human responsibility and Divine justice (cf. Dt 30: 19).

3. God has created the human person as a social being which by definition places limits on individual human freedom. Moreover freedom of choice is derived from God and therefore is not absolute, but must reflect Divine will and law. Accordingly human beings are called to freely obey the Divine will as manifested in the Creation and in His revealed word.

Jewish tradition emphasizes the Noachide Covenant (cf. Gn 9: 9-12) as containing. the universal moral code which is incumbent on all humanity. This idea is reflected in Christian Scripture in the Book of Acts 15: 28-29.

4. Accordingly the idea of moral relativism is antithetical to this religious world view and poses a serious threat to humanity. Even though the Enlightenment helped bring about a purification from the abuse of religion, secular society still requires religious foundations to sustain lasting moral values. Critical among these is the principal of the sanctity of human life and dignity. Ethical monotheism affirms these as inviolable human rights and therefore can provide inspiration in this regard for society at large.

5. While on principle the state should not at all limit freedom of religion for individuals and communities nor of moral conscience, it has the responsibility to guarantee the wellbeing and security of society. Accordingly it is obliged to intervene wherever and whenever a threat is posed by the promotion, teaching or exercise of violence and specifically terrorism and psychological manipulation in the name of religion.

6. In addition to respecting the freedom of religious choices, the integrity of faith communities should also be guaranteed. Accordingly it is legitimate for a society with a predominant religious identity to preserve its character, as long as this does not limit the freedom of minority communities and individuals to profess their alternative religious commitments, nor to limit their full civil rights and status as citizens, individuals and communities. This obliges us all to safeguard the integrity and dignity of holy sites, places of worship and cemeteries of all religious communities.

7. In the course of history, religious communities have not always been faithful to these values. Therefore there is a special obligation upon religious leaders and communities to prevent the improper use of religion and to educate towards respect for diversity which is essential in order to ensure a healthy, stable and peaceful society.

In this regard, there is a special role for families, schools and the authorities of state and society as well as the media to impart these values to future generations.

In conclusion the bilateral commission having met in the Holy City of Jerusalem, expressed the prayer that the Almighty would bless and inspire both religious and political leaders in the region and beyond, to work determinedly to promote peace, dignity, security and tranquillity in the Holy Land for all its peoples and for the world as a whole.

Posted by Just Another Hindu at 5:37 PM