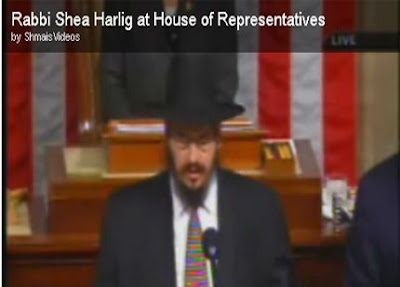 
On June 25, 2009 the US Congress was opened with a prayer statedly under the auspices of the Noahide Laws by Rabbi Shea Harlig. The Rabbi correctly states that the Noahide Laws were set forth by the Congress as in 1991 Public Law 102-14 was passed which states that the Noahide Laws are the foundation of American civilization, it is our responsibility to educate the nation about these laws, and that our President will sign an international scroll with other heads of state in order to return the world to the Seven Noahide Laws (here). The Rabbi says the Congress is assembled under the law of "justice", the seventh Noahide Law commands non-Jews to set up courts of justice in order to administer the death penalty for anyone committing idolatry (including Christianity), blasphemy against the Jewish god (praising Jesus as god is blasphemy), or engaging in homosexuality or adultery. The Congress was again opened under the auspices of the Noahide Law in July of 2010 by Rabbi Gershon Avtzon and in 2016 by Rabbi Yosef Greenber. Both Rabbis pray in the name of the founder of the modern Noahide movement, Rabbi Schneerson, who said that non-Jews have satanic souls, are made spiritually inferior, and are indeed the property of Jews who are the meaning of creation (here). The Noahide Laws were also referenced in Rabbi Moshe Feller's prayer before congress in 1994

Almighty God, the Members of this august body, the U.S. House of Representatives,
convene here to fulfill one of the seven Biblical commandments which You issued to all mankind: that all societies must govern by just laws.

At the dawn of civilization, as related in Genesis and its sacred commentaries, You issued seven commandments which came to be known as the Seven Noahide Laws:

To worship You alone and not to
serve idols,
Never to blaspheme Your Holy Name,
Not to murder,
Not to commit adultery,
Not to steal,
Not to be cruel to any living creature,
and
That every society govern by just
laws which are based in the recognition
of You, 0 God, as the Sovereign Ruler
of all men and nations.

Grant us, Almighty God, that those assembled here to enact the laws which govern this blessed country be cognizant of Your presence, and conduct their deliberations accordingly. Bless them with good health, wisdom, compassion, good cheer, and good fellowship. May they constantly realize that in laboring for the enactment of just laws they are doing Your will. Amen.
Posted by Just Another Hindu at 8:28 AM