Sanhedrin blames US mass shootings on lack of Noahide Law 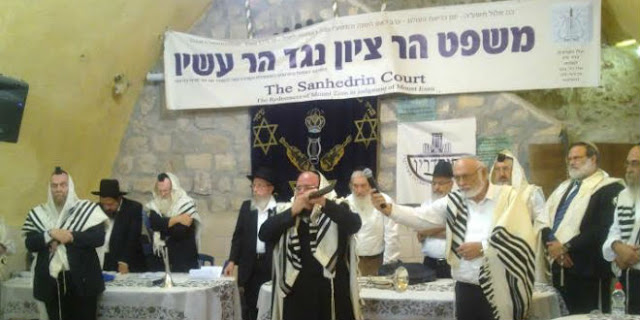 Breaking Israel News is an information website based in Israel which is a child company of the popular Isreal365 which is now the author of one of the most popular Bibles of today, the "Israeli Bible", which promotes the Noahide Laws within its pages. Breaking Israel News often gets exclusive interviews with the nascent Sanhedrin, a hope to be official body which is the extreme authority on Jewish Law both inside Israel (Halacha) and outside Israel (Noahide Law). This Sanhedrin has created a court for the burgeoning Noahide community and has stated that it seeks to make Noahidism the one and only religion on earth with the fall of all non-Noahides (here). After the recent shooting, the spokesman for the Sanhedrin, Rabbi Hillel Weiss, stated that the recent mass shootings in El Paso, Texas, and Dayton, Ohio where almost 30 people were murdered, these happened because governments have ignored the Noahide Laws, one law of which is not to "kill". However, according to Noahide Law, Jews are never guilty for killing a non-Jew (here) and according to Israeli Rabbi Yitzchak Ginsburgh, who is also a Noahide Law advocate, Jews may kill non-Jews and steal their organs (here). The call for Noahide Law as a solution to murder is hypocritical since Noahide Law calls for the decapitation of anyone who follows a religion not approved of by the Rabbis, such as idolatry, and does not allow anyone to express disfavor with the Talmudic god or engage in sexual expression outside of heterosexual marriage (here).

The murderer arises in the evening To kill the poor and needy, And at night he acts the thief. Job 24:14 (The Israel Bible™)

Two shootings, one in Ohio and another in Texas, left at least 31 people dead and at least 50 more wounded. A total of four mass shootings in one week left the country reeling, asking difficult questions about this horrifying epidemic of violence.
Global Horror But Specific Message for the Jews in Exile
Rabbi Pinchas Winston,  a prolific end-of-days author, emphasized that it is impossible to assign any clear cut historical meaning to these tragic events, adding that the real horror comes from their seemingly random nature.
“There are so many crazy people who happen to have guns that it is an absolute miracle that these shootings don’t happen more often,” Rabbi Winston told Breaking Israel News. Rabbi Winston noted that there are almost 400,000,000 guns in the U.S., meaning there are more guns than people.

“It is actually amazing that these horrifying events don’t happen every day,” Rabbi Winston said. “Peace and prosperity are a total gift from God that transcends the natural tendencies of Man. The shootings do not seem to be racist because they were apparently random. There does not seem to have been any specific hatred involved.”
“But these shootings don’t necessarily have to come through hatred,” he noted. “Racism and hatred will always be around even through people we thought we knew quite well.”
Rabbi Winston explained that the power behind such events as described in a Kabbalistic concept called Tohu (chaos).
“It doesn’t have to be connected to racism to have historic meaning,” Rabbi Winston said, emphasizing that Jews in America should pay special heed to the rise in mass shootings.”
“Anti-Semitism is not racism and Anti-Semites are not necessarily racists. It is natural, consistent with the nature of Man. The rabbis have taught that it is ‘natural’ for Esav to hate Yaakov (Jacob). Hashem just holds it back as long as the Jews have a purpose where they are. As long as they have a purpose, they are God’s emissary and he protects them. As soon as that purpose is over, the protection ends as well. Anti-Semitism is Jews being persecuted by God through man. Anti-Semitism is God raising his voice at the Jewish people because they didn’t listen to His quieter voice.”
“But tragic events that are not clearly a result of anti-Semitism can be even more dangerous because the Jews can reason that they are still safe. But God often starts from the fringes and we need to realize that these extreme events that show that chaos is here and that God is removing his protection from the Jews outside of Israel.”
“These shootings were horrible for everyone but have special significance for Jews outside of Israel.”
All of Humanity Forbidden from Murder by Noahide Laws
Rabbi Hillel Weiss, the spokesman for the Sanhedrin, informed Breaking Israel News that the Sanhedrin will sit this week to discuss the issue of mass killings and proper courses of action to prevent these tragedies.


“This is a sin that cuts across all boundaries and politics,” Rabbi Weiss emphasized. “The prohibition against spilling blood is one of the Seven Noahide Laws. Governments and leaders including the United Nations have ignored this, treating abortion and euthanasia as if they were positive acts.”
The Sanhedrin is currently working to establish an Organization of 70 Nations to replace the United Nations.
The rabbi noted that in some respects, Biblical sources support personal ownership of weapons. In particular, the Philistines prevented any Jews from doing metalwork in order to exclude weapons from Israel.

No smith was to be found in all the land of Yisrael, for the Philistines were afraid that the Hebrews would make swords or spears. I Samuel 13:19

“Care must be taken that a person does not see himself as the ruler, the ultimate authority,” Rabbi Weiss cautioned. “This is a perverted understanding of the concepts of freedom and liberty. The basis of the Noahide Laws is that Hashem (God) is One and only he has the authority to give life or take it away.”
“Establishing a court system of justice is also one of the Noahide laws. It is incumbent upon the society to enforce this, to prevent the spilling of blood.”
Posted by Just Another Hindu at 11:40 AM