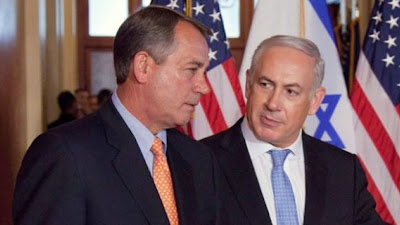 Controversial Israeli Rabbi Yitzchak Ginsburgh in 2015 asked then-House Speaker John Boehner to take action on Public Law 102-14 which obligates the American government to educate the nation and even the world about the Noahide Laws so as to bring non-Jews to observance.  Rabbi Ginsburg says this would allow Jews to fulfill their roles as teachers and guides to bring the non-Jews out of darkness via the teaching of the Seven Noahide Laws.  Rabbi Ginsburg is on record stating that under Jewish Law if a Jew needed a liver transplant, it would be permissible to sieze an unwilling non-Jew and take his organ; the Rabbi states this is because Jewish life is infinitely more holy than non-Jewish life.  Rabbis Schneerson who is praised in Publica Law 102-14 has also stated that non-Jews have no other purpose in existance other than to serve non-Jews; non-Jews are not permitted to have abortions as the fetuse belongs to and is to be used by Jews (here).


This was published earlier today from Rabbi Yitzchak Ginsburgh on Inner.org. I am posting it here in case someone did not see the original and would be interested in reading:

It has come to my attention that you have plans to visit the Holy Land in the coming days. If this is still the case, I would like to wish you a safe and enjoyable trip.

As King David writes, “Man’s steps are established by God.” This is true for every detail of every private person’s life, but becomes immensely more significant for those whose lives have proven to be of crucial influence on the overall history of mankind. It is for this reason that I am writing to you today.

Ours is the first generation in modern times to understand the truly universal human condition and to seek to bring all peoples of the earth together in peace and harmony. We are the first generation to understand that we are faced with the choice of either inhabiting our planet harmoniously or not inhabiting at all, God forbid. Filling our future is the fundamentalism that threatens to pit one religion against another. But our different relationships and understandings of God should not be the reason for conflict but the source of goodwill in building our relationships with one another and our ability to understand others.

The covenant with the Jewish people was not the first made between the Almighty and mankind. Before the revelation at Mt. Sinai, God commanded Adam and then made a covenant with Noah, giving them the guidelines for the universal religion of mankind. The most well-known part of this covenant is the seven universal commandments, or the Seven Noahide Laws. For this reason, Judaism and Jews do not proselytize, but rather seek to guide the nations of the world in developing their own relationship with the Almighty and implementing these potentially unifying laws of basic human nature.

In our times, Rabbi Menachem Mendel Schneerson brought the Laws of Bnei Noach to the forefront of our efforts to bring lasting peace and prosperity to the Jewish people and the entire world. Time and again, the Rebbe explained that the world is ready to accept responsibility for these laws and to renew the covenant made between Noah and the Almighty after the Flood, as recounted in Genesis.

The Noahide Laws are not a religion. Rather, they are the framework for creating a better world, a better humanity, based on the bond that every human being can enjoy with his or her Creator.

In 1991, US Congress officially recognized the Noahide Laws as part of joint resolution to designate an annual Education Day in tribute to Rabbi Menachem Mendel Schneerson.
To quote Public Law 102-14:

What do we learn from the above? That the answer to the present-day conflicts date back to Adam, and in recent times, the joint resolution by the 102nd Congress.

This is the call of the hour. Now is the time to both stand strong in face of darkness and redouble our efforts to spread light.


In April of that same year, Ginsburgh gained notice in American Jewish circles when he told the New York Jewish Week that Halacha, or traditional Jewish law, would “probably permit” seizing an unwilling non-Jew for a liver transplant to save the life of a Jew.

- (Foward, "The Kabbalist Who Would Be King ofa New Jewish Monarchy in Israel" by Natan Odenheimer, October 14, 2016 Retrieved From: https://forward.com/news/352016/the-kabbalist-who-would-be-king-of-a-new-jewish-monarchy-in-israel/)

Posted by Just Another Hindu at 7:57 AM