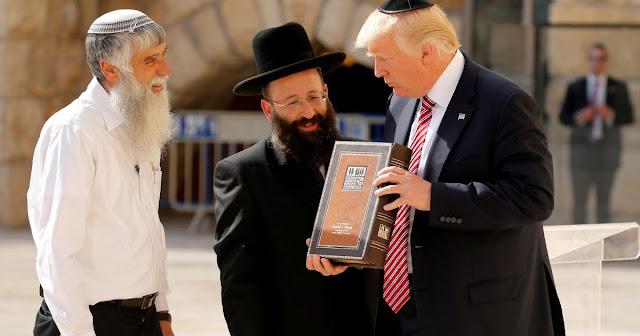 Breaking Israel News is a reliable Israeli news source which is run by the famous Israel365 initiative, which also produces one of today's most popular Bibles, The Israel Bible, with added teachings that encourage the acceptance of the Talmudic Noahide Laws. Because of their credible work, Breaking Israel News often gets exclusive interviews with high ranking Rabbis in Israel. One such Rabbinical body is the nascent and not yet fully legal highest court of the Jewish religion, the Sanhedrin. While the Sanhedrin does not yet have full authority, it is attempting to become a legal authority in Israel and is heavily involved in converting Noahides and demanding their allegiance to the Sanhedrin and the Noahide Laws, their stated aim is to see the fall of all other religions and the installation of the one religion of Naohidism (here). This same body, which has already claimed that the Noahide Laws will cause conflict with Christians and other religions, has sent a letter to President Donald Trump requesting that he uphold the Noahide Laws. Of course, they have legitimate legal reasons for this request as in 1991 the US recognized the Noahide Laws as the foundation of American civilization, stated it is our responsibility to educate the population about the Noahide Laws, and promised that the US would sign an international scroll with other heads of state promising to return the world to the values of the Noahide Laws with education and charity; all in Public Law 102-14 signed by George H. W. Bush (here). The Noahide Laws call for the execution of those who do not follow strict Jewish monotheism, which includes Christians (here), those who blaspheme Judaism (blaspheming other religions is ok), practice "sexual immorality" such as homosexuality (here), and demands non-Jews set up courts to enforce the death penalty on non-Jews who do not comply with these stringent Talmudic laws (here). Since an official Sanhedrin will have power both within Israel and outside of Israel (here), it is this Jewish body which would likely eventually have total jurisdiction over all non-Jews globally. So now we know for sure President Donald Trump knows about the Noahide Laws and that it is Israel's governmental agenda (here) to promote this legal system. It would be hard to believe Trump did not know this already as Trump's daughter Ivanka Trump is part of the most radically pro-Noahide Jewish sect, the Chabad-Lubavitch movement (here). Will Trump rebuke the Noahide as he has the Sharia, or is he an accomplice in the Zionist's "Noahide World Order" (NWO).


“Thus saith Hashem to His anointed, to Cyrus, whose right hand I have holden, to subdue nations before him, and to loose the loins of kings; to open the doors before him, and that the gates may not be shut.” Isaiah 45:1 (The Israel Bible™)

Trump holds a Bible given to him by his mother (Photo: Video Screenshot / Donald Trump Facebook Page)
In an ancient and honored Jewish custom, the nascent Sanhedrin sent a letter to the new leader of the U.S., President Donald Trump, blessing him and calling on him to take the lead in restoring America and the world. The Sanhedrin also called on the new president to acknowledge and uphold the Seven Noahide laws.
The letter follows the custom of the Jewish people to bless foreign kings as seen in a verse in Jeremiah, Rabbi Dov Stein, secretary of the Sanhedrin, told Breaking Israel News.

And seek the peace of the city whither I have caused you to be carried away captive, and pray unto Hashem for it; for in the peace thereof shall ye have peace. Jeremiah 29:7

Sanhedrin member Rabbi Yoel Shwartz expanded on the decision, pointing out the importance of Trump’s role. “We turned to President Trump because America functions as a world leader today in many things,” he told Breaking Israel News. “As such, we addressed the new president, asking him to fix things that Barack Obama broke, to bring back family values and to lead the war against radical Islamic terror.
“He has already made moves in the proper direction, and we bless him that he will continue to bring back the values that made America great,” praised Rabbi Shwartz. “We hope he will advance the Noahide laws that are incumbent upon all men.”
The prayer sent by the Sanhedrin to Trump is different from that usually recited by Jews living under foreign rule, Rabbi Stein explained.
“There was a version of the prayer that was said by Jews living under foreign kings, to appease the king in hopes that he will not oppress the Jews under his rule,” said Rabbi Stein. The prayer is still said in synagogues around the world and begins with a verse from Psalms.

Who givest salvation unto kings, who rescuest David Thy servant from the hurtful sword. Psalms 144:10

As suggested by the verse, the prayer is motivated by fear that a monarch ruling over Jews in exile would turn tyrannical and oppressive to the Jews who, as strangers in a strange land, depended on the king’s good will. But the Sanhedrin blessed Trump in a different tradition of blessing foreign monarchs which existed in Biblical Israel.
“We blessed him as an independent nation blessing a close ally,” said Rabbi Stein.
The Sanhedrin’s letter begins, “We thank God that a suitable man was chosen to lead America, whose values in the past symbolized a belief in God, and educated its people in morals and family values.”
The Sanhedrin then calls on President Trump to follow the Seven Noahide Laws, given by God as a binding set of laws for all of humanity. The Sanhedrin described the laws as a framework that will benefit all mankind.

“It is essential to return to the divine order that was given at Mount Sinai to all of Man, to the fundamental principle that is common courtesy and common sense preceding everything,” the letter emphasizes. “It is important to return to the seven guidelines given to Noah and his offspring that protect all human and moral obligations.”
The Sanhedrin also urges the president to adhere to his campaign promise of renewed support of Israel, including moving the US embassy to Jerusalem, so that Israel can fulfill its Biblical role as a light unto the nations.
“As an honorable President, you are aware of the importance of Israel as an ally, especially a cultural ally, of the United States. The whole world anticipates the instilling of Bible values – God’s morality given on Mount Sinai for all the world.
“We must work together so that these values ​​will be the inalienable property of all mankind,” the rabbinical body proposes.
The letter concludes with a final benediction for the world, but especially the two allies.
“It is our prayer to God that our way will successfully bring welfare and happiness to all mankind, and especially to Israel and the United States, and all of humanity will benefit from this.”
Posted by Just Another Hindu at 8:03 AM