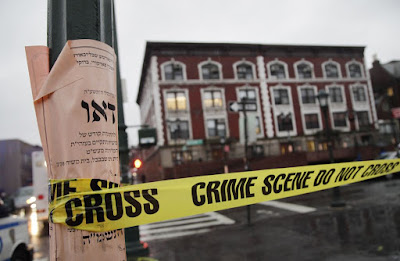 * MY NOTE: Judaism apologists will tell you that the above Jewish law does not allow Jews to murder Gentiles, but if they do there is no earthly punishment for it, they are punished in the next life... what is the difference? A law without a penalty is not a law at all

The Noahide laws are spelled out in the Talmudic folios of Sanhedrin 56a-57b. It is within the Noahide code itself that we find that while non-Jews are always executed under Noahide Law for theft or murder of a non-Jew or a Jew, Jews are never executed for stealing from or murdering a non-Jew (it is put as a question but legal scholar Maimonides clears the speculation, Jews are never executed for murdering a non-Jew). Sanhedrin 57a provides the legal proxy for the theft from and murder of non-Jews (goys) by Jews. Footnote 34 is of primary importance to this Talmudic passage because it explains why non-Jews may be robbed and killed. Footnote 34 references Baba Kamma 37b, the section which lays out the principle of reciprocity. Here we learn that if an Israelite’s cow injures the cow of a Canaanite, there is no liability, but if the cow of a Canaanite injures the cow of an Israelite, the Canaanite must pay in full. Footnote 12 explains that this is because the Canaanite does not accept “Jewish Law”, and therefore s/he cannot be expected to be protected by it, but of course s/he is expected to pay the one-way property damages.  This is this same logic which is used to condone murder and theft from non-Jews by Jews.

JEWS MY ROB AND STEAL FROM NON-JEWS (GOYS/CUTHEANS)

FOOTNOTES:
30. Stole (ganab) refers to secret stealing, robbed (gazal), to stealing by open violence.
31. In war, v. Deut. XXI, 10-14 — a species of robbery. [This is the only possible and correct rendering of the text, contra Goldschmidt. Cf. Tosef A.Z.]
32. Acts which are not actual robbery, but partake of its nature.
33. ‘Cuthean’ (Samaritan) was here substituted by the censor for the original goy (heathen).
34. [I.e., though it is forbidden to rob the heathen (v. Yad, Genebah I, 2; VI, 8), the offence was non-actionable. For reason, v. B. K. (Sonc. ed.) note on Mishnah 37b.]
35. But actually it is punishable too. [This is merely a survival of old Semitic tribal law that regarded theft and robbery as a crime against the state, and consequently punishable by death. V. Muller, D. H., Hammurabi, 88]
36. Thus the Tanna does refer to punishment; since then he omits a reference to punishment in the clause under discussion, it shows that the heathen is not executed for robbery. In the whole of this discussion the punishment referred to is death.

“THE PRINCIPLE OF RECIPROCITY”

FOOTNOTES
9. [Mishnah text: 'of an Israelite'.]
10. Lit., ‘ox’.
11. Ex. XXI, 35.
12. As Canaanites did not recognise the laws of social justice, they did not impose any liability for damage done by cattle. They could consequently not claim to be protected by a law they neither recognised nor respected, cf. J. T. a.l. and Maim. Yad, Niz. Mam. VIII, 5. [In ancient Israel as in the modern state the legislation regulating the protection of life and property of the stranger was, as Guttmann. M. (HUCA. III 1 ff.) has shown, on the basis of reciprocity. Where such reciprocity was not recognised, the stranger could not claim to enjoy the same protection of the law as the citizen.]
13. I.e., the ox that did the damage.
14. So that they should guard their cattle from doing damage. (Maim. loc. cit.)