Jewish Press published only Noahides are friends of Jews, Christians are enemies 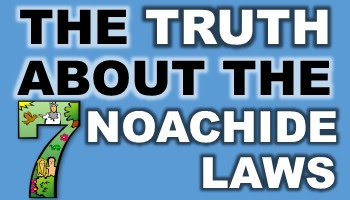 Two years ago the Jewish Press published an article in which the author claimed that only Noahides are the friends of Jews but Christians are enemies. According to the author "anti-Semitic Christians" only hate the Noahide Laws because they are leading Christians away from Christ. He says that if the "proper" courts were in place non-Jews who didn't follow the Noahide Laws would be beheaded. Just read this article, it is dripping with insane hatred!


“An empty head is not really empty; it is stuffed with rubbish. Hence the difficulty of forcing anything into an empty head.”- (Eric Hoffer, Reflections on the Human Condition, aph. 88 1973)
Friends don’t let friends do drugs. But neither do they attempt to “introduce” friends to Jesus, either overtly or with covert evangelizing. Friends don’t mask a supposed rejection of “replacement theology” with a deceitful concept called “restoration theology”, (unknown to their naïve Jewish friends) which masks the former perversion while retaining its essential beliefs. All behind the veneer of a tolerant theology.

Nor do true friends align themselves with aggressive missionary organizations and personalities across the world, nor engage in speaking tours with the former, while simultaneously shedding crocodile tears about Christian wrongdoing. Genuine friends don’t distort and lie, to form those ever-critical relationships essential to “relational evangelism”. Genuine friends have no ulterior motives or hidden agendas, neither to trick the friend or to manipulate and usurp something that belongs to the friend. Friends will not be caught time and again having to explain away seemingly overt expressions of evangelical intent caught on videotape.

As such, NO evangelical Christian can ever be a true friend to Jews, since by its very definition an evangelical is married to these doctrines. And one who wishes to change you has contempt for you. In an era when too many Jews seek out the “friendship” of duplicitous spiritual enemies and brazenly and inaccurately apply the term “righteous gentile” to these predatory sorts, the forthcoming reading of Parshat Noach is a powerful reminder that we Jews only have one group of gentile friends. Those righteous gentiles who follow the ancient mandated code of the Noachide Laws. As I noted in a previous article, “Friendly Foes: The Subtle Missionary”:
“In truth, the Jew has few genuine friends who come in the name of religion. The Bnai Noach represent the lone gentile community that can genuinely call himself a friend, since the true Bnai Noach desire the sanctification of Hashem’s name in the framework of the Torah. Of course, gentiles identified as Bnai Noach are hard to find, small in number, and they aren’t as well financed.”
Yet as I pointed out, the lack of friends should never compel a normal person to orchestrate the illusion of false friendships. Such a tactic is no less insane when applied to those with a harmful spiritual agenda, than it is when leftist Jews grab the hand of supposed Arab moderates, who as the late Rabbi Meir Kahane often noted, “murder Jews moderately”.
“Choosing the hand of Esau to defeat the sword of Ishmael is suicide. The scourge of missionizing both classical and clever, and Heaven forbid the eventual likelihood of Jewish apostasy, idolatrous admixtures, deceptive conversions, and even Christian Jewish unions resulting from such poison alliances, will ensure Divine punishment. In the war with Amalek, we don’t arm ourselves with idolatry.”
The following article deals with righteous gentiles who truly follow the 7 Laws of Noach. I am not referring to the followers of a few fringe “guru Rabbis” who have their own radical agendas and platforms, and have made whole careers out of redefining the concept of “ger” contrary to the most normative definitions of chazal. I am speaking of “the real deal”, those Bnai Noach who associate with and are guided by genuine men of Torah. After all, a Ben Noach requires the aid of a Rabbi as much as any Jew when it comes to questions relating to the Noachide framework.

It is not easy to be a Ben Noach. The Seven Laws (even more according to many rabbinic decisors) represent categories that encompass subcategories, and the penalties for abrogation of this covenant are stricter than they would be for a Jew who abrogates them. Were their proper courts in effect today, the penalty for abrogating the 7 Laws is death by decapitation. A Ben Noach combines discipline and intellect to properly live this rigid code of law. All of this should make us appreciate the commitment of these gentiles who abandoned idolatry to follow Torah. Some critical points relating to the 7 Laws of Noach:

Disclaimer: This doesn’t mean that gentiles who are unaware of these laws are bad. Hashem will judge them based on their pursuit of truth. Yet this is the designated framework to attain the status of righteous gentile. Yahadut maintains that the righteous of the world are guaranteed a share in the world to come. As a rule, for the non-Jew, the Noachide Laws are the sole vehicle for obtaining this status. Individual gentiles may under certain circumstances obtain reward for their actions independent of if they ever commit themselves to these laws. The Talmud records such instances. The Almighty alone knows what’s in a man’s heart, and to what extent he committed himself to the pursuit of truth in his lifetime.

“As we shall see later, the Jewish evaluation of contemporary Christendom turned mainly on the question whether Christians satisfied the terms of the Noachide Covenant, which included belief in the unity of G-d. There was, however, no doubt that gentiles, Christians not excluded, stood outside the bounds of the biblical covenant in the full sense of the term.” (page 3)

Many gentiles are eagerly waiting for Jews to reach out to them with the authentic knowledge of Hashem. But contrary to the delusions of more than a few Jewish activists, these gentiles are NOT to be found among the missionary and messianic camps. Evangelicals are not drawing closer to Hashem in any manner, and no amount of volunteerism, or “Old Testament” loving expressions can remove the fact that these people remain fervent in their idol worship. Their enduring belief in “that man” is as strong as ever. The time is long overdue to cast away the halachically prohibited “friendships” of two-faced evangelicals who dole out millions to Jewish charities. All our energies towards gentiles should be directed towards Bnai Noach and those truly interested in pursuing this Divinely mandated path. They are the only friends that Am Yisroel has.

Hashem has not neglected or abandoned non-Jews. While the particularistic aspects of Judaism are real and specific to our own people, there are genuine universal aspects to Judaism, as we recite in the beautiful Aleinu prayer, L’taken Olam B’Malchut Hashem”. Our mission for the rectification of the world can only occur in the framework of the “Kingdom” of Hakadosh Baruch Hu. For gentiles, the means of fulfilling G-d’s Will is by adhering to the Seven Laws of Noah.

Many Jews fear “bringing this knowledge to the world since it comes off to the ignorant as intolerant and fundamentalist. While Judaism surely respects the human condition which often necessitates a long and arduous spiritual search, ultimately every gentile is required to follow the 7 Laws of Noah, an intensive, disciplined way of living, and not a religion (which is prohibited to the gentile). We either impact the world based on the words of Hashem, or we lose our concepts to distorted gentile’ interpretations, as seen today in the fields of Samaria. Without teaching B’nai Noach, we neglect the most righteous gentiles, and invariably pursue relationships with those who abrogate G-d’s will.

Gentiles have an obligation to study and adhere to the 7 Laws of Noach. In the absence of such a system, they have no means of articulating this obligation. We Jews are obligated to adopt the mantle of teacher like our forefather Abraham to disseminate this knowledge. Not with institutions which “teach” Torah to evangelicals and thus give them tools to infiltrate Jewish communities with greater sophistication. And not with attempts to kasher the profane. Our collective failure to embrace this task constitutes a Chillul Hashem. And the forbidden admixture of religious Jew and evangelical today, seen most notably in interfaith prayer forums, conferences, volunteerism, and general alliance, is the most egregious chillul Hashem of all.

Posted by Just Another Hindu at 6:32 AM