Jews should not trade with non-Noahides on their holidays 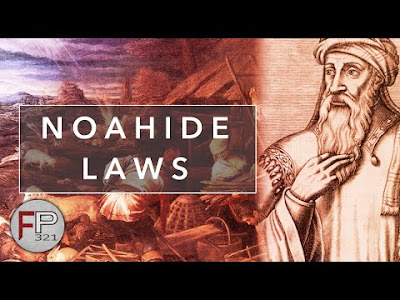 According to the Talmud, Jews should not do any sort of business with non-Jews who do not follow the Noahide Laws up to three days before their "idolatrous" holidays because the non-Jew could use the money to buy supplies for their idols (Christianity is also considered idolatry) and also this could put the non-Jew is a good frame of mind which would make him or her praise their idols all the more. But what would happen if non-Jews refused to trade with Jews before or on their holidays? We would be called anti-Semitic!


Idolatry Or Not? (Avodah Zarah 2a)

Photo Credit: Jewish Press
As I walked into the front room that cold winter night after school to light the Chanukah candles, there, in his flowing robe sat Sir James Parkes, the celebrated Anglican priest and author of The Scourge of Anti-Semitism, and a good friend of my father.
Sheepishly, I approached the Chanukah candles and muttered the Hebrew blessing under my breath. “Amen,” thundered Sir James.
Advertisement

Clearly my father and Sir James had a Common Friend.
The hallmark of idolatry is that it confuses the Creator with His creation. The Torah warns us not to worship the sun, the moon, and the stars.
The Rambam describes the history of idolatry as beginning with the adulation of God’s creation and culminating in the erection of monuments to celebrate the heavenly hosts. People first began to believe that God was in the monument and then that the monument was God.
Idolatry is forbidden to Jews and non-Jews alike. The Hebrew term for sun, moon, and star worshippers is ovdei kochavim umazalot, or just the acronym – akum.
The halacha not only requires the Jew to refrain from the practice of idolatry, but also to disassociate himself from others who do.
Accordingly, the Talmud and, following it, the halacha, prohibited the Jew from trafficking with the akum on his religious holiday. In Israel, the prohibition commenced three days before the holiday. The akum holiday prohibition included buying from the akum or selling him goods that would last through the holiday, lending to him or borrowing from him, sending him gifts, or visiting him.
The Talmud offers several reasons for these akum holiday prohibitions.
First, there was a concern that the akum would use the funds or goods received from the Jew to purchase animals for his holiday sacrifices. Providing the funds for the purchase makes the Jew an accessory to the crime and partially responsible for causing the akum to violate the Noachide law that prohibits the worship of idols. Then there was the concern that a successful transaction with a Jew would cause the akum to be in a good frame of mind and praise the idol on his holiday for his good fortune. This would be a violation of the Torah law that prohibits a Jew to cause a person, Jew or non-Jew, to pronounce the name of another deity.
It is the opinion of the Rishonim, the early halachic authorities, that the akum holiday prohibitions no longer apply today in Israel and that they certainly do not apply today outside of Israel.
This opinion is based on several grounds.
First, as expressed by the Rosh and Rabbeinu Tam, the degree of enthusiasm with which idolaters serve their idols has become diluted over the centuries and with it the concern that any added value would cause them to extol their gods.
Second, according to Rabbeinu Tam, the core reason for the akum holiday prohibitions was the concern that one would help the idolater in his quest to purchase the best available animal for sacrifice to his deity. Today, however, the practice of animal sacrifice is almost entirely extinct.
Third, trafficking with a non-Jew during his holiday is permitted if it is known that the particular individual is not into idol worship, even if the society in which he lives is.
Fourth, shunning the akum on his holiday is not recommended if it might cause eivah, enmity between the akum society and the Jewish society.
Fifth, if the primary purpose of the Jew is lehachnif, to keep in the good graces of the akum with whom he does business year round, then he is permitted to celebrate with the akum, albeit, in a measured way. The Rema suggests that any gift should be sent to arrive before, rather than on, the akum’s holiday.
Sixth, the akum holiday prohibitions do not apply to Jews whose livelihood depends upon good relations with an akum society.
Finally, the Rishonim, almost across the board, maintain that the idolatry the akum holiday prohibitions were directed at is no longer practiced today.
Rabbi Menachem Ben Shlomo Mei’ri, who lived in Provence in the thirteenth century, states in his commentary to Avodah Zarah that the akum holiday restrictions do not apply to Jews who live among Christians and that the Christians of his day were not idolaters. According to the Me’iri, umot hagedurot bedarkei hadatot, people who adhere to a religion that disciplines their lives and who do not worship the heavenly bodies are not considered idolaters even if they do not practice Judaism. The Rambam states that a member of the Islamic faith is not considered an akum.
Accordingly, in one of his Responsa, Rav Ovadiah Yosef states that a Jew may visit a mosque. Indeed, religious Jews of Kiryat Arba conduct Jewish prayer services in the designated Jewish synagogue located in the mosque of the Machpelah cave. For the same reason, in order to ease the difficulties caused by the Shemittah year, the Israeli rabbinate has ruled that real estate in Israel can be temporarily sold to Arabs without violating the Torah prohibition of Lo Techanem, which would otherwise prohibit the sale of land to idolaters.
Based upon passages in the Rishonim that artifacts which bear the semblance of items of worship but are intended only for decorative use are not prohibited, some halachic authorities permit one to don gold or diamond studded jewelry made in the shape of a cross. In fact, Rabbi Yaakov Meir, the former Sephardi chief rabbi of Israel, who was awarded a gold cross for bravery, would always wear it proudly on his breast pocket whenever he visited the British high commissioner in Palestine.
Posted by Just Another Hindu at 6:59 AM