Noahide says most Noahides are Zionists 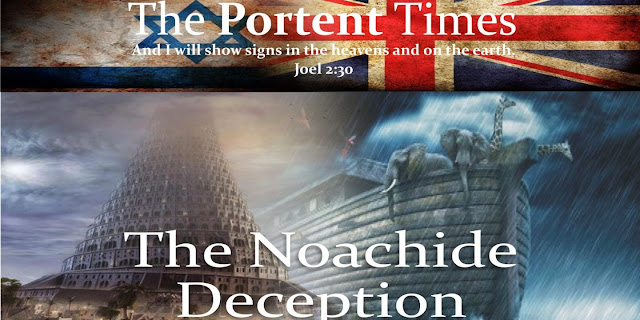 Richard Mather is a Noahide convert living in England who has written for Jewish outlets like the Isreal National News, the Jewish Media Industry, and Voices for Isreal. According to Mather, most Noahides support Zionism and indeed are at the forefront at combatting "anti-Zionism". This is because Zionism and Noahide Law are inseparable, Noahide Law in integral to Judaism since the times of the Talmud. The Zionist state of Israel is actively engaged in Noahide conversions (here & here). Mather also reminds us that non-Jews are not allowed to create their own religion or celebrate "pagan" holidays like Christmas and Easter. What does Richard Mather think about the Noahide commandment to set up Noahide courts to behead non-Jews who do not comply with Noahide Law?

A Noahide Explains Walking with Noah

The Torah portion, Noah, (Genesis 6:9-11:32), read this past Shabbat, is an important reminder that any individual, Jew or gentile, has a place in this world and in the world to come.

More from the author ►
The recent Torah portion, Noah, (Genesis 6:9-11:32), is an important reminder that any individual, Jew or gentile, has a place in this world and in the world to come.

The story of Noah is particularly important to those gentiles who refer to themselves as B’nai Noah (literally, children of Noah) and follow the Seven Noahide Laws, a set of principles that are a divine blueprint for ethical living.

For thousands of years, there has been a belief that all men and women are bound by a universal code of morality. Following the deluge, Hashem renews His relationship with creation in its entirety and promises to never again to “cut off” all flesh with the waters of a flood. In return, mankind must behave wisely and justly, and walk with Hashem.

According to Maimonides, six laws were commanded to Adam in the Garden of Eden.These were prohibitions against idolatry, blasphemy, murder, sexual immorality and theft, as well as the commandment to establish laws and courts of justice. To Noah, God reiterated the law against murder and added the prohibition against eating flesh from a living animal, sometimes interpreted as behaving compassionately towards animals.

Not since the days of the Second Temple when G-d-fearing gentiles regularly attended synagogues throughout the diaspora, has the Torah played such an important part in the lives of non-Jews.

This universal and ancient code was arguably the faith of Noah, Shem, Abram, Job and possibly even Jethro, Moses’ father-in-law. These great men had strong ethical beliefs, and enjoyed a fruitful relationship with Hashem. Noah’s son Shem, for example, is believed to have been Melchizedek, the King of Salem or Jerusalem. Melchizedek means “my king is righteousness” or “righteousness is my king.” As a priest, Melchizedek brought out bread and wine and blessed both Abram and G-d.

The Seven Laws of Noah were reiterated at Mount Sinai and form part of the 613 commandments given to the people of Israel. The reason for this is simple: the Jewish people were to safeguard these universal principles and to teach them to the nations. In other words, the Jews are a nation of priests tasked with bringing non-Jews into a relationship with Hashem. Jews themselves, of course, have their own particular covenant with Hashem as expressed in the Torah.

Judaism is not a religion which seeks converts. The rabbis clearly teach that non-Jews have the option of following the Seven Laws of Noah. Although conversion is not prohibited (far from it), it makes no difference in terms of that person’s “salvation.” Jew and gentile alike are loved by G-d and judged by their deeds, not by their religious affiliation.

When a gentile resolves to observe the Seven Laws, his or her soul is elevated. According to the rabbis, a non-Jews who commits himself to the Noahide Way becomes one of the “pious ones of the nations” and receives a share of the world to come, as well as blessings in this world.
The Noahide faith has nothing to do with creating another religion, which is forbidden in the Torah, but is about acknowledging Hashem as the One G-d of both Jews and non-Jews, and recognizing that He is a righteous and loving G-d, Who is intimately concerned with His creation.

Noahidism is rapidly gaining in popularity in the West, especially among former Christians who wish to have a relationship with Hashem without the baggage of Christian dogma and two thousand years of Church-sanctioned anti-Semitism. In fact, not since the days of the Second Temple when G-d-fearing gentiles regularly attended synagogues throughout the diaspora, has the Torah played such an important part in the lives of non-Jews.


There are many Noahide groups and communities in the UK, Australia, parts of Europe, and throughout the US. In the early 1990s President George Bush Senior signed into law an historic Joint Resolution of both Houses of Congress recognizing the Seven Noahide Laws as the "bedrock of society from the dawn of civilization.”

Chabad Lubavitch has done the most in recent years to reach out to non-Jews. In 2006, the spiritual leader of the Druze community in Israel met with a representative of Chabad to sign a declaration calling on all non-Jews in Israel to observe the Noahide Laws. A year later, Chabad brought together ambassadors from Poland, Japan, Ghana, Latvia, Mexico and Panama, who all championed the Noahide Laws.

In Manchester, England, where I live, Chabad has been prominent. Hassidic Jews are often seen handing out leaflets to passers-by. There is now a small Noahide study group, which gathers every week to discuss the Torah and Halakhic matters. I am glad to say I am one of the participants in this group.

The majority of Noahides are very supportive of the State of Israel and are on the frontline in the fight against anti-Semitism and anti-Zionism in their own countries.
Most Noahides have their own blessings and prayers (written by orthodox rabbis) and have turned away from pagan holidays such as Christmas and Easter. Some Noahides attend synagogues and most, if not all, study under trained rabbis.
In 2005, the scholar Rabbi Moshe Weiner of Jerusalem started work on an in-depth codification of the Noahide precepts. Published three years later, Sefer Sheva Mitzvot Hashem (“The Book of Seven Divine Commandments”) has been approved by the chief rabbis of Israel, as well as other halakhic authorities.

As a Noahide I am proud to be part of a growing movement which seeks to restore the faith of Noah and Shem. I am also gratified to be considered a friend of the Jewish people and the State of Israel. But mostly I am glad to have heeded Jeremiah 6:16, which speaks of a journey of righteousness and a life of fidelity towards Hashem:
“This is what the Lord says: ‘Stand at the crossroads and look; ask for the ancient paths, ask where the good way is, and walk in it, and you will find rest for your souls’.”
For non-Jews, the Noahide Way truly is the ancient path.
Posted by Just Another Hindu at 8:10 AM