Times of Israel blogger: Noahide Law is a demand and a duty! 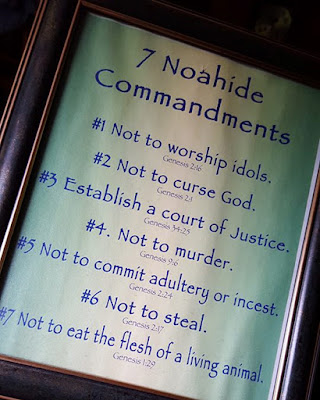 This Jewish blogger for the Times of Israel says that when it comes to Noahide "no one is above the law" and that Noahide Law is a "demand" and a "duty".

Seven Laws Of Noah, Many Of Which, Don’t Apply To Omar

BS”D
The seven Noahide laws as traditionally enumerated are the following:[7][8]
So here are seven fundamental demands for all of us, no matter who we are. It is our duty as human beings to observe these laws. No one is above the law, especially when it comes to these seven fundamental laws.
It should be a fundamental duty of all decent people to follow these laws, so that we can live in harmony with our fellow human being.
All of these laws are easy to understand and easy to put into practice. And there should be no argument from anyone that these laws must be strictly followed.
They are easier to follow than the Ten Commandments because there are only seven laws instead of ten. But for one reason or another, all people don’t look at it that way.
To Make It Easier, Let’s Look At Only Three Of These Seven Laws
There is nothing complicated about the three above mentioned laws. These three laws are in the Ten Commandments we just read in Shul.
I Am Having Difficulty Understanding Why Congress Is Ignoring Point Three Above
Point Three requires the establishment of Courts Of Law which will insure that justice is maintained throughout the world.
The United States has a Supreme Court and a full judiciary system.
The United States Congress has lawmakers, the vast majority of whom are qualified attorneys and should know the laws of the United States.
I understand-
There is a current battle in Congress between Democrats and Republicans in this election year.
I understand-
The Democrats have decided they want to remove President Trump and they brought impeachment hearings into Congress which failed miserably
What I don’t understand is-
Why Representative Omar from Minnesota’s 5th District Remains In Her Seat!!!!
From the time I lived in Minneapolis until now, there has never been a point in time that my home town was such a dangerous place to live in. Omar has done nothing about this to my knowledge-
Just a few stories out of many which prove Omar’s failure to do her job and proves my point are contained in the following links-
https://alphanewsmn.com/light-rail-operators-say-they-no-longer-feel-safe-at-work-am-i-going-to-hcmc-on-a-gurney/?utm_medium=push_notification&utm_source=rss&utm_campaign=rss_VWO+Engage&notification_source=pushcrew_rss
https://alphanewsmn.com/metro-leaders-testify-about-steps-to-reduce-light-rail-crime/?utm_medium=push_notification&utm_source=rss&utm_campaign=rss_VWO+Engage&notification_source=pushcrew_rss
What she is heavily involved with is the ongoing saga with her finances and her new boyfriend as per the following link-
https://alphanewsmn.com/ilhan-omar-continues-to-dump-big-bucks-into-alleged-boyfriends-firm/?utm_medium=push_notification&utm_source=rss&utm_campaign=rss_VWO+Engage&notification_source=pushcrew_rss
It is time that Omar be investigated and removed from her seat.
What is the reason for the delay?

Posted by Just Another Hindu at 10:45 AM