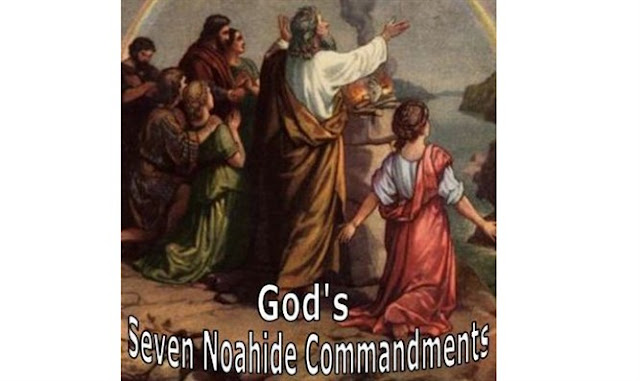 
Jim Long is a former Christian who converted to Noahidism. According to Jim Noahides are iconoclastic and are against those who have twisted monotheism. He is likely speaking of Christianity which according to Judaism is idolatry (here). Additionally, the Rabbis who conducted the interview states the Noahide laws are positive obligations. It is also stated that Salim Jaber, the mayor of the Arab village of Abu Gosh near Jerusalem, made a public declaration accepting to observe the seven Noachide laws. So we are out there in various forms.

The amazing journey of Jim Long, an observant Noachide.
The Torah, as explained in the Talmud, presents seven mitzvot for non-Jews to observe. These laws are the pillars of human civilization, and are named the "Seven Laws of Noah," since all humans are descended from Noah. They include the prohibition against murder, theft, idolatry, cursing God, sexual immorality, and eating the limb of a live animal. The seventh law is a positive obligation to set up a system of justice.
Today, there is a growing worldwide movement called B'nai Noach or Noachides – non-Jews who accept the truth of Torah and faithfully observe the Seven Laws of Noah. Maimonides explains that any human being who faithfully observes these laws earns a proper place in heaven.
Aish.com spoke with Jim Long, a prominent member of the Noachide movement, whose Lightcatcher Productions creates books and documentaries on Torah themes.
Q1: How did you get involved with becoming a Noachide?
In the early 1990s I was working in talk radio in Dallas. One day we had a last-minute hole in the schedule and I had to find a guest to fill it. I’ve always been interested in archeology and I’d heard of a Texan named Vendyl Jones who had conducted excavations in Israel searching for biblical artifacts such as the Ark of the Covenant. What I hadn’t know was that Vendyl was an avowed Noachide. He came on our show and I was so impressed with his scholarship and unique perspective on archaeology and the Bible that I began attending his study groups on the weekly Torah portion.

Torah really impressed me as being not just rational, but also true!

I began learning about the basic tenets of Judaism like free will and Divine providence, and the more I studied the more I became convinced that Torah is true. I have spent my whole life in search of the Creator and an understanding of what He wants from us, trying out various Christian denominations. But Torah really impressed me as being not just rational, but also true! Before long I was working with Vendyl on archaeological digs in Israel and filming his documentaries, Digging Up the Future and Return to Gilgal. In 1995, I married my wife Carol, also a Noachide, on a dig near Qumran, where the Dead Sea Scrolls were discovered.
Q2: In practical terms, what does it mean to be a practicing Noachide?
The basic seven laws are actually “root concepts” of a total life outlook. These are outlined in the many Noachide “guidebooks” that have been published, for example, Path of the Righteous Gentile by Chaim Clorfene and Yaakov Rogalsky. In fact, we just published a new book called Guide for the Noahide by Rabbi Michael Shelomo Bar-Ron. When someone reaches a stage of commitment, there is a standard Noachide pledge – a public declaration stating belief in One God, recognizing the authority of Torah, and agreeing to uphold the seven laws.
Beyond that, it’s pretty much up to the individual to do what is meaningful to him. For example, I eat cheeseburgers, but not pork or shellfish. I observe a day of rest on Shabbat (certainly not on Sunday, which is a Christian innovation); I don’t work, but I do drive a car. I’ve been learning how to pray in Hebrew, which I feel will get me closer to God. So like I said – aside from the seven laws, it’s pretty much a personal thing.
The one place we draw the line is that we’re careful not to give a false impression of being Jewish. For me that means I wouldn’t wear a kippah or tzitzit in public, although I am aware of Noachides who do. If I want to put a mezuzah on my door, I would put it on the inside of the doorpost, not the outside facing the street. And of course we are careful not to do anything that smacks of starting a new religion; historically that’s been tried many times before with damaging results.
Q3: If you believe in the truth of Torah, why don’t you convert to Judaism?

That’s a question that every Noachide faces at some point in his journey. And many do wind up converting. Personally I’ve wrestled with this issue for many years. But since my wife does not want to convert, I’ve put it on hold. She loves Torah, but is simply not ready for that step. I still feel a bit “left out” sometimes when I visit a synagogue or am in Israel. But her instincts have always been on target, and I trust that being a Noachide is what God wants from me.
Q4: How many practicing Noachides are there today?
That’s a very difficult question to answer, because Noachides are typically very iconoclastic. They’ve seen how the core values of monotheism have become twisted by some religions, and that’s often what spurred their decision to break away from organized religion. So they are very hesitant to get back in. But in answer to your question, there are thousands of practicing Noachides.
Noachides want a fellowship with other Torah-believers, both Jewish and Noachide. Yet because they resist becoming part of an organized movement, most of that Noachide “community” takes place online. For example, the Internet is where you’ll find curriculums for parents who want to teach their children in the Noachide ways. We annually attend national and regional gatherings like the Noachide conference in Florida last year. In Israel, there was a stir when Salim Jaber, the mayor of the Arab village of Abu Gosh near Jerusalem, made a public declaration accepting to observe the seven Noachide laws. So we are out there in various forms.
Q5: Historically, why is it only in recent decades that we’ve seen the start of a Noachide movement?
There have been smatterings over the centuries. For example, some documents of the founding father of the United States mention the Seven laws of Noah. There is also evidence that Sir Isaac Newton was a “closet Noachide.” In his manuscripts he wrote extensively on Torah topics, even writing phrases in Hebrew. He believed (as the Talmud says) that the Tabernacle mirrored the arrangement of the cosmos, and he sketched the Jewish Temple according to precise dimensions. He accepted the Bible as the word of God and rejected Jesus as a deity. But in his day, it was not politically correct to come out publicly against the Anglican Church. Had he done so, it might have influenced the course of history. Then there was John Selden, a brilliant jurist who lived in the 1600's wrote extensively on the Sanhedrin. He impacted international law, basing his concepts on the Seven Laws of Noach.
Q6: So what changed today?
There is a path that God’s plan takes through history, and it’s all a matter of timing. Torah flows directly from the Jews to the non-Jews, so given the founding of the State of Israel, the mass Aliyah to Israel, and the Baal Teshuva movement of Jews returning to Torah – that is why we’re seeing Noachides emerge. If you look in Mishneh Torah where Maimonides discusses the topic of the Jewish Messiah, that is immediately followed by a discussion of the seven Noachide laws. That juxtaposition indicates that as we get closer to the Messianic era, more and more non-Jews will respond to the truth of Torah. But a mass movement of Noachides can’t happen until the Jews are ready. The Jewish people are to be the teachers of Torah to humanity, and until the Jewish community is committed to taking on that role, the real revolution can’t happen. So it’s all a matter of timing.
Q7: As a Noachide, who is your biblical role model?
You might think it’s Noah, but actually it’s not. There was a shortcoming with Noah in that he believed in God but didn’t reach out to bring others to that belief. So this may sound funny – because he was the prototype Jew – but my role model is Abraham. He had a tent open on all four sides to welcome travelers, where he would teach them about the One God. It’s accurate to say that Abraham was a Noachide for the first 75 years of his life, until God came and told him that he’d become the father of the Jewish people. I’ve dedicated my life to producing documentaries and books that are Torah-based, and I’d like to think that is continuing Abraham’s tradition of moving people closer to Torah.
Ironically, I’ve seen how my work can affect Jews as well. I wrote a book and accompanying documentary called, The Riddle of the Exodus, which explores historical and archaeological proof of the Jewish Exodus from Egypt. I’ve presented this talk to Jewish groups around the world and it always gets a great reaction. The audience loves hearing a non-Jew present a compelling argument for the veracity of Torah. For me, it’s another facet of an amazing and a very very rewarding journey.

Posted by Just Another Hindu at 5:45 AM