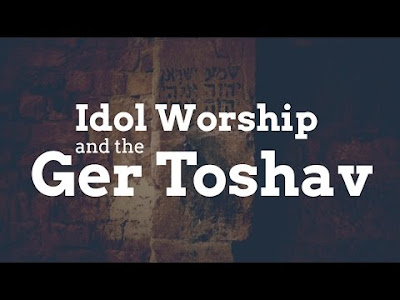 A non-Jew who lives within the land of Israel is called a "Ger Toshav", it is a special designation. Jews will often tell us that non-Jews can live within the land of Israel as long as they follow the Noahide Laws (here). But in this article, Chabad says that during the time of the conquest of Israel, even Canaanites who accepted the Noahide Laws were driven out of the land (rather than being killed). How can we trust Jews to keep their promise of an open Israel even if non-Jews living there promise to follow the Noahide Laws?

Conquest of the Land of Israel

After the death of Moses in 2488, his disciple Joshua led the Jewish people into the land of Israel. The campaign of conquest took seven years, and the division of the land among the tribes took another seven years. Great miracles, such as the walls of Jericho collapsing, accompanied the fighting, but the most spectacular of all was Joshua’s stopping the sun at Gibeon. This event is so famous that it is recorded in the lore of peoples around the world, including the American Indians, Chinese, and Greeks. In all, 31 kings were subdued, although the Jews did not conquer the entire Promised Land. Joshua also set up the Tabernacle at Shiloh in 2502, which lasted 369 years. Joshua died in 2516.

The Seven Nations of the Land of Israel

The Torah exhorts the Jewish people to annihilate the Seven Nations: men, women, and children, everyone down to the very last infant. To the Western mind, this seeming ethnic cleansing seems barbaric, reminiscent of the Nazi extermination of the Jews. However, there are several very important distinctions that must be made. What if a parent or a physician knew the future of a newborn infant — and that that future was Joseph Mengele, standing at the train ramp in Auschwitz, selecting Jews for the gas chambers. Killing such an infant would be doing a great service for mankind. Of course, under normal circumstances, since no one knows the future, no one has the right to take someone’s life.
In the case of the Seven Nations, however, G‑d Himself tells the Jewish people to execute these nations based on His knowledge of what will transpire. G‑d knew that these nations were the most depraved on earth, killing and torturing children in the most savage idolatrous rituals. Since immorality and corruption completely permeated their society, any contact would be most detrimental to the Jewish people — as was sadly borne out by history. Joshua first presented the Seven Nations with three choices. If they accepted the Seven Noachide Laws, the basis of a civilized society, they would be permitted to remain in the Land. Of the seven, only the Gibeonites availed themselves of this option. Those who did not accept the Noachide Laws were given the opportunity to leave, and the Girgashites did so, fleeing to Africa. (This historical fact was memorialized in a tablet called the Girgashite Stone, unearthed in North Africa. Inscribed on it are the words “We fled from Joshua the robber.”) Finally, Joshua presented the remaining nations the choice to fight — and to face the consequences if defeated. They chose to fight – and were conquered. Nevertheless, even when killing out the nations, the Jewish people did not torture or degrade them, as the Nazis later did to the Jews.

The Mishkan and the Permissibility of Bamos

The Torah prohibits offering sacrifices outside the Holy Temple (Mishkan) on a private altar, or bamah. (pl.bamos) This was not a constant prohibition, and according to rabbinic tradition did not apply at certain times in Jewish history. An understanding of this issue is essential when studying the books of Samuel and Kings. The following chart outlines the permitted and forbidden times for Bamos:
Bamos became permanently forbidden with the erection of the Holy Temple at Jerusalem. Therefore, sacrifices may not be offered today even though there is no Bais Hamikdash.
« Previous

From Egypt to Israel
Next »

Early Leadership in Israel
By Yosef Eisen
Excerpt from Miraculous Journey by Yosef Eisen. For thousands of years the Jewish people have survived and flourished, against all odds. Miraculous Journey takes you on a 700-page tour of Jewish history, all in one volume, from Creation to President Obama. Yosef Eisen, a noted historian and lecturer, tells the miraculous story and history of an eternal nation. Books may be ordered directly from the author. Email him or write to Yosef Eisen, 2337 Sherbrook St., Pittsburgh PA, 15217. Books cost $37, plus $6 shipping - total $43.
More from Yosef Eisen  |  RSS
© Copyright, all rights reserved. If you enjoyed this article, we encourage you to distribute it further, provided that you comply with Chabad.org's copyright policy.
Posted by Just Another Hindu at 3:36 PM