Israel is not a Secular State 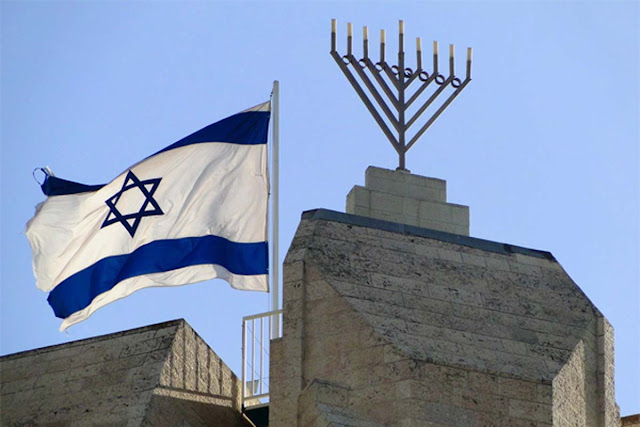 We have learned that the Noahide movement in the United States is being directed largely in part by Rabbis within the Israeli government.  This may come as a surprise to some who believe that Israel is a secular state which would not engage in Jewish Law movements either within Israel or abroad.  Israel is not a secular state, it is a Jewish State, and Jewish Law is very much part of the Israeli legal system.

Israel Does Not Have A Constitution
A truly “secular state” has a constitution which makes a clear separation between Synagogue and State, Israel does not have such a constitution because it would clash with the idea of a “Jewish State” and the implementation of Jewish law (Halacha). Rather than provide a clear-cut secular constitution, Israel has a vague and shifty set of laws called “basic laws” which do provide some degree of secular civil rights to Israelis, however these laws do not prevent the implementation of Jewish religious laws as you will see. Indeed, this lack of real secularism has become the lamentation of many modern day Israelis who resent the influence of the Rabbis in their daily affairs.

“Israel does not have a written constitution, even though according to the Proclamation of Independence a constituent assembly should have prepared a constitution by October 1, 1948. The delay in the preparation of a constitution resulted primarily from problems that emerged against the background of the alleged clash between a secular constitution and the Halacha (the Jewish religious law).” - Israel Government & Politics: Constitution, Jewish Virtual Library

“Despite what the Proclamation of Independence of the State of Israel states regarding the preparation of a constitution by the Constituent Assembly, Israel has no written constitution in the formal sense, even though it has a constitution in the material sense – in other words, laws and basic rules that lay down the foundations of the system of government and the rights of the individual. Some of these are formulated in basic laws, some are scattered in other laws, and part – at least until the passing of basic laws dealing with human and civil rights – were interpreted and formulated in a series of decision by the Supreme Court.” - - Israel Government & Politics: Constitution, Jewish Virtual Library

“But Ben-Gurion’s historical compromise with the Orthodox parties has turned out to be a catastrophe. Israel, to this day, doesn’t have a constitution; the Rabbinate is involved in the lives of countless people who don’t want anything to do with it, and the Orthodox stream in Judaism (which is a minority in Jewry worldwide) has a monopoly that aggravates and alienates millions of Jews in Israel and the Diaspora.” - Why Israel must become a secular state: a thought for Yom Kippur 5770, HAARETZ, By Carlo Strenger, Sep. 27th 2009

State Funded Rabbis and Rabbinical Courts
An obvious example of Israel’s status as a “Jewish state” and not a secular state is the fact that Israel has state funded Rabbis, and these Rabbis wield an incredible amount of political and legal control within the nation. In 2013, two Ultra-Orthodox Rabbis were elected as Israel’s “Chief Rabbis” with control over the nation’s marriage, divorce, adoption and kosher food supervision and with state funded salaries of $100,000 dollars per year.

“Rabbi David Lau, 47, the chief rabbi of Modi’in, a large bedroom community between Jerusalem and Tel Aviv, was elected for the Ashkenazim (Jews of European descent), and Rabbi Yitzhak Yosef, 61, the head of a yeshiva and an author of 40 books on Jewish law, for the Sephardim (Jews of Middle Eastern origin). Both are sons of renowned former occupants of the post: Rabbi Lau’s father, Yisrael Meir Lau, served as Ashkenazi chief from 1993 to 2003 and now is the head rabbi of Tel Aviv; Rabbi Yosef’s father, Ovadia Yosef, was Sephardi chief from 1973 to 1983 and, at 92, remains a powerful force as the spiritual leader of the Shas Party. The younger Rabbis Lau and Yosef were elected to 10-year terms in the $100,000-a-year job. They will rotate leadership of Israel’s rabbinical courts, which control marriage, divorce and adoption for the nation’s six million Jews. The rabbinate also oversees the supervision of kosher food, conversion and other aspects of daily life here, and it is condemned by many critics as a corrupt patronage farm. (Rabbi Lau will replace Yona Metzger, who is under house arrest on suspicion of fraud, bribery and embezzlement.)” - Ultra-Orthodox Candidates Elected as Israel’s Chief Rabbis, THE NEW YORK TIMES, By Jodi Rudoren, July 24th 2013

Jewish Laws of Marriage, Divorce and Adoption
With the Rabbis in control of Israel’s marriage, divorce and adoption laws, the non-secular and halacha flavor of Israel becomes very apparent. Under the influence of the Rabbis, there is no “civil marriage” in Israel, and all marriages are performed by Orthodox Rabbis. Jews who wish to marry non-Jews must leave the nation, marry outside of the nation, and re-enter as a mixed couple.  This has spawned much discontent among more secular minded people in the Zionist state.

Per Halacha law (Jewish law for Jews), a Jewish divorce is not considered legal until the husband approves of the divorce and provides his wife with a “get” note.  Today, in Israel, if a women cannot obtain a religious marriage from her husband she is stuck in social limbo, neither married nor divorced, she cannot remarry and is obligated to pay her absent husband’s debts and taxes.

Finally the Rabbinate of Israel makes it very difficult for anyone but Orthodox Jews to adopt children because of special laws which make it mandatory for all adopted children to be converted and and raised as orthodox Jews, a mandate which precludes many secular minded people from the adoption process.

“Only Orthodox Rabbis may perform wedding ceremonies in Israel. More than 70 percent of American Jews define themselves as Reform or Conservative, although these movements have failed to make major inroads in Israel. Conversions done by Reform or Conservative rabbis are also not recognized in Israel… The ultra-Orthodox rabbinate controls all issues of personal status, including marriage and divorce. To get married in Israel to another Jew, you must prove you are Jewish. ” - Israel Civil Marriage Ban Blocks Those Not Considered Jewish From Wedding, HUFFINGTON POST, By Linda Gradstein, June 12th 2013

“Tessler is one of hundreds, perhaps thousands, of Israeli women caught in legal and social limbo because of a law that leaves matters of divorce for all Jewish citizens in the hands of a government-funded religious court. The court, consisting of a panel of rabbis, bases its decisions on the customs of Orthodox Judaism. The rulings apply to all Jewish Israelis, whether they are Orthodox, Conservative or Reform, observant or secular. And their authority even extends to those who married abroad in civil ceremonies that were registered in Israel. Divorce for non-Jews is handled by their own religious institutions. Under the court’s interpretation of Jewish religious law, a husband’s, or wife’s, consent is necessary to end a marriage. As has been the case for centuries, a Jewish divorce is not final in Israel until men deliver handwritten divorce decrees into the cupped hands of the women, who then must hold the paper aloft. A rabbi tears the document, called a get, into pieces, which are then filed for record-keeping.” - Israel divorce law traps women in marriages that died long ago, LA TIMES, By Edmund Sanders, July 26, 2013

“Those adopting non-Jewish children must convert them through a special Orthodox rabbinical court that deals with converting minors and which operates under the Chief Rabbinate. The process not only includes an order to send the child to a religious school, but also attempts to change the parents’ way of life: They are asked to start observing Shabbat and kashrut, and to go to synagogue.These demands, which have legal backing, are a gross interference in the way of life – which in a democratic society is supposed to be the parents’ choice – of anyone wanting to adopt a non-Jewish child.” - Orthodox control over Israel’s adoption process cannot be tolerated, HAARETZ, June 19th 2012

The Rabbis Seek More Influence
Beside the legal influence they already have, the Rabbis of Israel are ever seeking (and gaining) more control over other institutions such as the army and the education system in Israel.  Israel has a “Military Rabbinate” who often times makes attempts to shame secular soldiers by having them buried in a manner which many find degrading, separated from the rest in their own cemeteries like second-class citizens. The Military Rabbinate also interferes in the appointments of higher officers. As of 2013, it has been reported that the Israeli government is testing a pilot program which would install “school rabbis” in supposedly secular schools, and so the influence of the Rabbis over Israeli society grows further.

“It’s not Arlington, or Normandy, or any national cemetery where Jews are buried alongside Christians. Here, if a soldier who sacrificed his life for Israel is not sufficiently Jewish the rabbis will try to force him into a different area, far away and fenced in.”… “The chief military rabbi is supposed to serve as the shock absorber for religion in the army but often he’s the one causing the shocks. After hearing of the appointment of reserve Lt. Col. Rafi Peretz to the post, the families of Gil Tzuriano and Assaf Rosenberg, members of Airborne Rescue And Evacuation Unit 669 who died in a 1992 accident in which Peretz was involved as a helicopter pilot, protested the choice.” - God! Enough of the Military Rabbinate, HAARETZ, By Amir Oren, Feb. 1st 2010

“Does a secular school need a rabbi? According to Rahel Metuki, director of the Haifa District in the Education Ministry, the answer is yes. The website Mynet has reported that Metuki has initiated a pilot program for the current school year in which a “school rabbi” will be appointed for every state-run primary school in two Haifa suburbs, Kiryat Haim and Kiryat Bialik.” - Why do secular Israeli schools need rabbis?, HAARETZ, By Naomi Darom, December 9th 13


Many Jews Actually Prefer Halacha (Jewish Law) Over Democracy
However, even though many people in Israel do take objection to Israel’s lack of true secularism, don’t think that Halacha law is unpopular, recent studies done in Israel show that 44% of the nation prefer Halcha over democracy when the two are in conflict.

“In late January, the Israel Democracy Institute’s Guttman Center for Surveys, along with the Avi Chai Foundation, released the results of a comprehensive survey on the religious beliefs of Israeli Jews… What is not so good is that only 44% of those questioned replied that if there is a contradiction between democratic values and Halacha (Jewish law), the latter should be upheld. This implies that when push comes to shove, a majority of Israelis would prefer Jewish law to democratic values.” - When Democracy and Halacha Collide, Many Israelis Say Jewish Law Trumps Democratic Values, JEWISH DAILY FORWARD, By Harvey Hames, Published February 10th  2012

Posted by Just Another Hindu at 8:37 PM