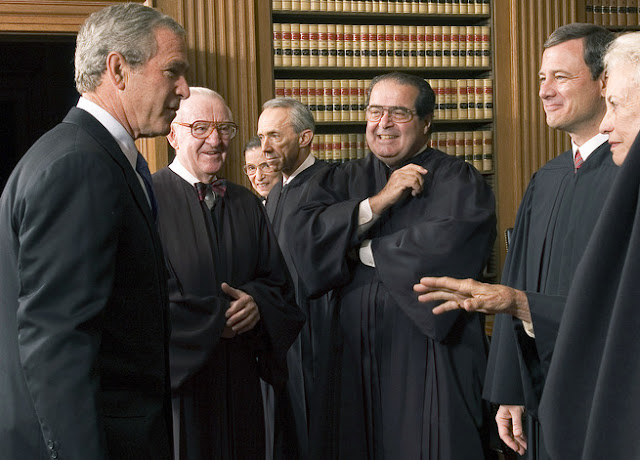 On November 5th, 2002 a Kosher dinner was held at the Supreme Court to celebrate the launch of the International Institute for Judaic Law (IIJL), whose stated purpose is to promote the application of Jewish Law and Philosophy in contemporary society.  The Noahide Laws are Jewish Law, and their application would lead to discrimination against non-Jews. The same Jewish lawyers, the Lewins,  who submitted the brief to the Supreme Court advocating the consideration of Talmudic decapitation, they also attended the dinner, helped establish IIJL, and they are both also outspoken advocates for Noahide Law. The dinner was attended by three of the Supreme Court Justice - Ruth Bader Ginsberg, Stephen Breyer, and Antonin Scalia, who provided their letters of approval to the founder of the institute, Rabbi. Dr. Noson Gurary. President George W. Bush also sent his greetings and approval for the institute and Jewish Law.
International Institute of Judaic Law (IIJL) - Now Defunct
Before you get to the news article posted by the Jerusalem Post about the celebration for the opening of the International Institute of Judaic Law (IIJL), which is now defunct, and the letters of greetings and approval by George W. Bush and the Supreme Court Justice, please take a moment to read the “About” section and “About the Founder” section of the the IIJL website.  From this you will learn that the institute is dedicated to the “application” of Jewish Law in contemporary society.  The founder of the institute, Rabbi Dr. Noson Gurary, is a Chabad-Lubavitch Rabbi and has held key positions in many New York State (SUNY) academic institutions.  Chabad-Lubavitch is the same religious group who are mentioned in the text of Public Law 102-14, and were once headed by Rabbi Schneerson, a Noahide Law advocate who stated that non-Jews have "satanic" souls.

About the InstitutePDF: About IIJLThe International Institute for Judaic Law (IIJL) was founded for the purpose of promoting the study, understanding, and application of Jewish law and philosophy, especially as they pertain to critical issues facing contemporary society. The exploration of Jewish perspectives and values will provide judges, lawyers, businesses, other professionals and social scientists with fresh insights and approaches with which to address fundamentally important social issues and practices.
The Institute’s Director

PDF: IIJL FounderDr. Noson Gurary (845) 362-1166rabbingurary@gmail.comNoson Gurary received his Ph.D. in Philosophy from Moscow State University, Russia, and his M.A. and B.A. from the Rabbinical College of United Lubavitch Yeshiva, from which he also received his rabbinical ordination and dayanius (Jewish Judge) Dr. Gurary is an accomplished author, lecturer, and philosopher. He has published three books: (1) The Thirteen Principles of Faith: A Chassidic Viewpoint, (2) Chassidism, Development, Theology and Practice, and (3) Holidays in Chassidic Philosophy. In addition, he has authored numerous articles on disparate aspects of Jewish philosophy and Jewish law. Rabbi Dr. Gurary has served; as an Adjunct Professor in Judaic studies at State University of New York (SUNY) at Buffalo from 1970 to 2008, an Adjunct Professor in the State University Law School in Buffalo in the 1990s and has lectured extensively and internationally on matters of Jewish thought and concern.He is the Founder and Executive Director of the Center for World Culture and Chassidism at Moscow State University, as well as of the International Institute of Chassidic Studies and the Women’s Institute for Jewish Traditions in Buffalo. In addition, Dr. Gurary is the original founder of the Chabad Student Center in Buffalo, New York, and currently serves as the Director of all of the Chabad Student Centers of Western New York, including Buffalo, Rochester, Syracuse, Binghamton, and Ithaca.

Jewish Law Institute Launched In DC
From the November 9th, 2002 Jerusalem Post article “Jewish law institute launched in DC” we learn that the IIJL was launched at a Kosher dinner held at the Supreme Court and that three of the Supreme Court Justices were in attendance - Ruth Bader Ginsberg, Stephen Breyer, and Antonin Scalia.  Letters of greetings and approval from Supreme Court Justices Ginsberg and Scalia can be found below.  George W. Bush also sent his greetings and approval for the launch of the institute, his official letter can also be found below.  Also in attendance were  two Jewish lawyers, Alyza Lewin and her father Nathan Lewin who helped found the IIJL.  Alyza Lewin refers to a brief she and her father submitted to the Supreme Court promoting Talmudicexecution law.  Both the Lewins have shown support for Noahide Law.

Jewish legal experts have created a new institute that will educate jurists and others about 2,000 years of Jewish law and promote the application of the teachings to contemporary legal disputes and other modern-day issues.
The launch of the Washington-based National Institute for Judaic Law was marked Tuesday night with a kosher dinner at the Supreme Court attended by 200 people, including three Supreme Court Justices – Ruth Bader Ginsberg, Stephen Breyer, and Antonin Scalia.

US President George W. Bush sent greetings and applauded the institute for promoting an “understanding of Judaism’s rich tradition of legal thought.”
“As we face new challenges and welcome new opportunities, our society must continue to promote good character and strong values. Through the study and teaching of Jewish law and philosophy you are contributing to a growing culture of service, citizenship, and responsibility in America,” Bush wrote.

Scalia, in a letter to the institute’s founder, Noson Gurary, wrote that “Jewish law is certainly one of the oldest and most highly developed systems” and explained why the comparative study of legal traditions was beneficial.

“The idea is to make Jewish law more accessible to everyone,” said Washington lawyer Alyza Lewin. Both Lewin and her father Nathan Lewin are helping establish the institute.

Last year, Alyza Lewin filed a brief to the Supreme Court based on the Talmud’s take on capital punishment when the court was readying to hear a case on the constitutionality of the electric chair.

“Legal scholars often like to know what other legal traditions have said about certain issues,” said Alyza Lewin. Filing that kind of opinion is only part of the institute’s mandate. It will also promote the teaching of Jewish law, develop curricula on Jewish law that can be integrated into traditional law school courses, and serve as a resource for anyone wanting to know what the vast Jewish legal tradition has to say on various issues..

Gurary, who teaches at the State University of New York at Buffalo, thought up the idea of the institute about nine months ago. “By demonstrating the philosophy of Jewish law and its moral values, we can bring a little beacon of light in this world,” Gurary said. “I think this is what we need now, in this day and age.”

Letter of Greeting From George W. Bush
Down Load PDF 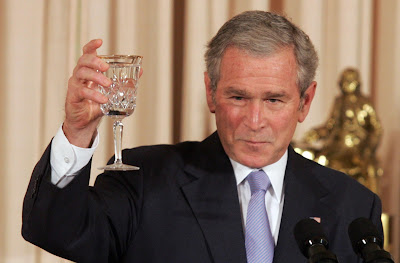 I send greetings to those gathered for the inaugural dinner of the Nationallnstitutc of Judaic Law.

As we face new challenges and welcome new opportunities, our society must continue to promote good character and strong values. Through the study and teaching of Jewish law and philosophy, you are contributing to a growing culture of service, citizenship, and responsibility in America. I applaud your efforts to address important social issues and ethical principles such as honesty and integrity, and to promote understanding of Judaism’s rich tradition of legal thought.

Laura joins me in sending our best wishes. 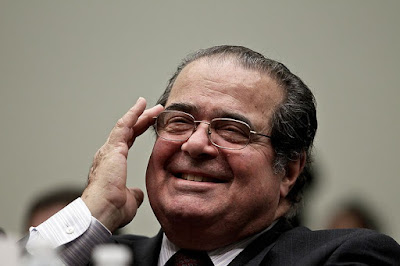 In a 2001 letter to Rabbi Noson Gurary, Supreme Court Justice Antonin Scalia conveys his fascination with Jewish Law. Did Scalia know that Jewish Noahide Law calls for the death of "idolators" and blasphemers?

Thank you for your letter of February 16. It was good to hear from you again

I am glad to learn that you are teaching a course in Jewish Law at Buffalo. As you may know, I used to teach, among other things, comparative law-which I was interested in doing not only for the subject’s inherent interest, but because I believed that knowledge of another legal system helps a lawyer understand the essentials of his own. Jewish law is certainly one of the oldest and most highly developed systems, as I learned with fascination some years ago when I attended a conference on the subject at Newport Beach. Marshal Breger has been teaching a course in Jewish Law at Catholic University Law School, and I gather it has been well received. You might check with him on what works and what doesn’t. Anyway, good luck in your new enterprise. 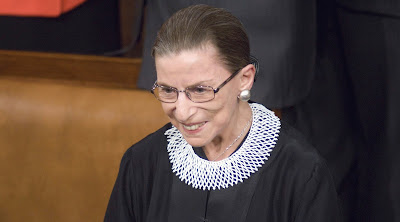 Finally, from Supreme Court Justice Ruth Ginsburg’s letter to Rabbi Noson Gurary we find that she addresses him as “My Dear Rabbi” and it appears the two are close enough to have exchanged Chanuka gifts with one another.  Ms. Ginsburg expresses her admiration for the Rabbi and how she was “touched by the legions cheering” for the Rabbi at the Kosher dinner, legions cheering for what?

In all my 70 years, I have never seen a more sterling menorah.  It will brighten this Chanukah, and many to come through generations of my family. Appreciation beyond measure.

My son has just produced a CD set I think you might like. I am enclosing it along with this catalog. If there is any other recording listed in the catalog that you or your children might like please let me know.

I was touched by the legions cheering you and your efforts at the November 5 dinner at the Court, and was glad to be present at the celebration.
With admiration and affections

Posted by Just Another Hindu at 6:42 PM