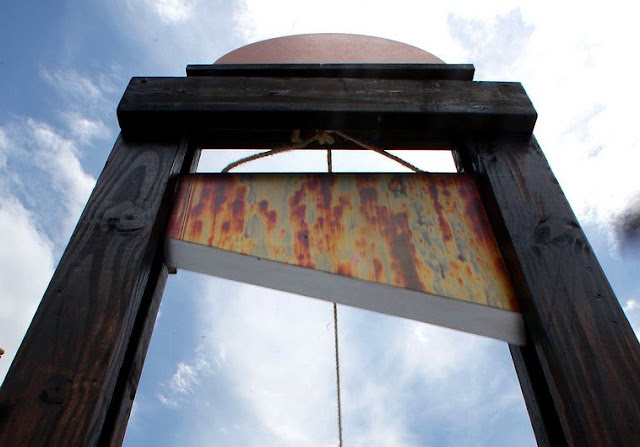 VIDEO TO THIS ARTICEL

In 2013, the American based news outlet "The Jewish Press" published a very disturbing article by a Jewish writer named  Menachem Ben-Mordechai. The tile of the article is "Like It or Not, the Seven Noachide Laws Are Still Pending" and carries the creepy subheading "There are many good, solid reasons to support applying the death penalty to a variety of crimes."  Menachem Ben-Mordechai basically argues that it is non-Jewish secular law which is prohibiting Noahides from murdering non-Jews who do not comply with the Noahide Laws, he uses " sexual deviancies" and "idolatry" as examples. He states: "Judaism does not care only about Jewish conduct. Judaism is not indifferent to whether gentiles commit idolatry, rape, etc. The Seven Laws of Noah still exist, as do both our national and global duties." In order to defend his belief that non-Jews who break the Jewish Noahide Laws should be killed globally, he references the writings of Rabbi Moshe Weiner whose book "The Divine Code" implied that non-Jews who do not follow Noahide Laws globally should be killed (here), this book was also given blessings and approval by the Chief Rabbis of Israel. Menachem Ben-Mordechai also sites the Lubavitch movement, which is referenced in US Public Law 102-14 (here) and whose leading figure, Rabbi Schneerson, said non-Jews have satanic souls and only exist to serve Jews (here). Public Law 102-14 states that these Noahide Laws are the "foundation" of American civilization, and we have Noahide Converts (here) here in America proselytizing these murderous laws of hate, and now the The Jewish Press is publishing calls from Jewish writers to have non-Jews killed for idolatry and sexual deviance?  Not only this, but we have Jewish Noahide Law advocates suggesting our Supreme Court use Talmduic execution (here) methods such as decapitation and receiving praise from former Presidents and Supreme Court Judges (here & here)? What is going on here?

Like It or Not,
the Seven Noachide Laws Are Still Pending

There are many good, solid reasons to support applying the death penalty to a variety of crimes.
By
Menachem Ben-Mordechai

-
10 Heshvan 5774 – October 13, 2013
During a recent Shabbat, I was reading volume one of Rabbi Joseph Telushkin’s A Code of Jewish Ethics. In a discussion of permissible lying under oath, Rabbi Telushkin writes of a situation where “the punishment to be imposed on the basis of the testimony is so enormously disproportionate to the crime committed as to be a worse offense than perjury.” As an example, Rabbi Telushkin notes how pickpocketing in eighteenth-century England was a capital offense, then states:
“It would seem to me that a person who saw an act of pickpocketing and was summoned as a witness would be morally obligated to lie under oath if his truthful testimony could result in a person being killed for an act of pickpocketing (it is better to lie under oath, if one cannot avoid testifying, than to be responsible for bringing about a non-violent felon’s death).”
This position seems admirable, but was England’s policy in fact contrary to Torah?
Rabbi Joseph B. Soloveitchik zt”lwrote in Abraham’s Journey, “From a halakhic viewpoint, the universal mission of Abraham crystallized in seven mitzvot, the covenantal mission in 613.” The universal mission refers to the Seven Laws of Noah (Sheva Mitzvot Bnei Noach) that apply to gentiles. Rabbi Samson Raphael Hirsch zt”l described the Noahide laws as “the moral code for all of mankind” (commentary to Bereshit 2:16) and observed in this vein during a speech in 1859:
“The Jewish mind understands that the law of Judaism was intended only for the sons and daughters of Abraham as the God-ordained norm for the nation that has been chosen as a nation of priests, as consecrated torchbearers of the truth that is destined to redeem all of mankind. But the Jewish mind also understands that truth as such, that justice, that enlightenment and that moral civilization are intended to be the heritage of all to whom God has given breath on earth.”
In relation to Rabbi Telushkin’s example, one of these seven universal commandments prohibits theft. What is the punishment for theft under Noahide law? Rabbi Moshe Weiner writes in his study of the Sheva Mitzvot:
“An adult Gentile is warned about the prohibition of theft, and can be subject to capital punishment in a court of law for this transgression. This applies whether one forcefully robs or secretly steals money or any moveable property, or kidnaps a person, or withholds the wages of his employee or other similar acts, or even an employed harvester who eats from his employer’s produce without permission to do so. For all such acts, a Gentile is liable for a capital sin, and one who commits any of these types of transgressions is considered as a robber.”
Likewise, in his 2012 book We’re Missing the Point: What’s Wrong with the Orthodox Jewish Community and How to Fix It, Rabbi Dr. Gidon Rothstein dedicates two chapters to the Noahide laws and writes on the prohibition of theft:
“Like murder, theft as a broad concept is intuitive, but its exact definition and the punishment accorded it in the Noahide code goes beyond the expected. First, Noahide law punishes theft of even minimal amounts of money, even if the victim is not the rightful owner. Second, like all Noahide law, theft is considered a capital crime.”
Rabbi Dr. Rothstein observes in a footnote to that passage:
“I suspect most of us find it difficult to justify the death penalty, even in theory, for stealing a few dollars. That may reveal how inured we have become to theft’s ubiquity; were we more sensitive to the damage theft does to a social sense of unity and common purpose, we might understand better how it could arouse the kind of moral revulsion usually reserved for murder or rape–which, incidentally, is seen as a kind of theft by at least one rabbinic author.”
Similarly inured to certain sexual deviancies, some Jews—among them those who identify as Orthodox—might have difficulty with Noahide prohibitions in this realm. Rabbi Dr. Rothstein notes that “Judaism has a view of wrongful sexuality for non-Jews as well” and how “part of being Jewish is to adhere to and believe in a universal ethic about sexuality, one at great odds with common assumptions of contemporary Western thought.”
As specific examples, Rabbi Soloveitchik wrote in The Emergence of Ethical Man, “It is worth mentioning that both prohibitions (bestiality and homosexuality) apply to non-Jews too and form part of a universal religion that is based upon the concept of man and personality.” Rabbi David Bar-Hayim of Machon Shilo has more recently discussed these matters.
There are Jews who act like the Noahide laws are some historical curiosity with no binding relevance today. For instance, a self-described Orthodox rabbi recently wrote of “how foggy our understanding is of Noahide law.” Contrast this glib claim with the Lubavitcher Rebbe’s advocacy of Noahide outreach and Rabbi Soloveitchik’s reflections:
“Our task was and still is to teach the Torah to mankind, to influence the non-Jewish world, to redeem it from an orgiastic way of living, from cruelty and insensitivity, to arouse in mankind a sense of justice and fairness. In a word, we are to teach the world the seven mitzvot that are binding on every human being.”
Judaism does not care only about Jewish conduct. Judaism is not indifferent to whether gentiles commit idolatry, rape, etc. The Seven Laws of Noah still exist, as do both our national and global duties.
Posted by Just Another Hindu at 8:20 PM