Noahide Laws should factor in US election says Jewish writer 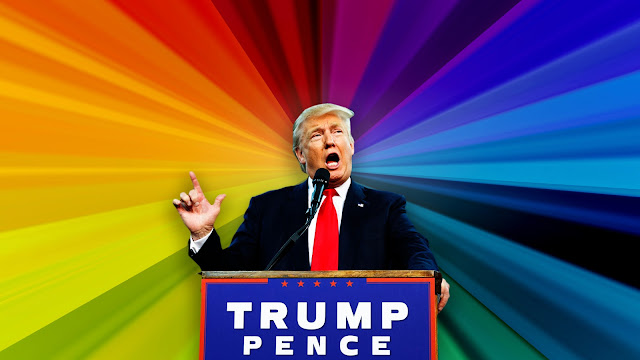 Right before the US Election in November of 2017, the Israel National News published an article by a Jewish writer named Menachem Ben-Mordechai who has advocated for the global implementation of the death penalty for non-Jews who break the Noahide Laws (here), such as practicing idolatry, or blaspheming or engaging in "sexual deviancy". However this article dealt with the US election and the Noahide Laws and was titled "The elections and the Noahide Laws" with the subtitle "The basis for moral civilization has a role to play." American Public Law 102-14 (here) says the Noahide Laws are the "ethical values and principles which are the basis of civilized society and upon which our great Nation was founded", and so it would only make sense that these Noahide Laws should play a role in Presidential Elections. Menachem Ben-Mordechai basically makes the case for Trump because he will likely be less favorable to gay marriage and abortion. In regards to abortion Menachem Ben-Mordechai states: "Judaism teaches that Noahides are specifically enjoined from destroying fetal life upon penalty of death. Consequently, any aid extended to a gentile in the performance of an abortion is a violation of the precept".  A leader of the Noahide Movement, Rabbi Schneerson, who is honored in Public Law 102-14, implied that only Gentiles (non-Jews) are to be executed for aborting a fetus (here), but not Jews, because a Gentile's fetus is meant for Jews and the non-Jew does not have a right to destroy that which has been created for Jews.

A non-Jew's entire reality is only vanity. It is written, "And the strangers shall stand and feed your flocks" [Isaiah 61:5]. The entire creation [of a non- Jew] exists only for the sake of the Jews. Because of this a non-Jew  should be punished with death if he kills an embryo, while a Jew,  whose existence is most important, should not be punished with  death because of something subsidiary. We should not destroy  an important thing for the sake of something subsidiary. - Rabbi Schneerson (here)

Menachem Ben-Mordechai ends his article with:  “Our task was and still is to teach the Torah to mankind, to influence the non-Jewish world...In a word, we are to teach the world the seven mitzvot that are binding on every human being.”

The elections and the Noahide Laws

The basis for moral civilization has a role to play.


“Where are the Sheva Mitzvot Bnei Noach [Seven Noahide Laws]?”

So asked Rav Aaron Rakeffet last month expressing his dismay at the support for same-sex marriage legislation by members of “Open Orthodoxy.” (See 37:00 here.) Rav Rakeffet's question came to mind after reading these recent remarks by an Orthodox blogger who supports Hillary Clinton:

"What is truly troubling to me is the number of Orthodox Jews that have indicated to me that they will vote for Trump. It doesn’t even matter what side of the Hashkafic spectrum they reside. Whether they are hassidic, haredi (Yeshivish), or Centrist...So I have one question to ask all of my Orthodox co-coreligionists who say they will still vote for Trump. What’s the matter with you?!"

Accordingly, one might define political unfitness as advocating policies that violate the moral basis of civilization—for example, a candidate whose platform seeks to subsidize abortions.
I refer to Clinton's objective to end the Hyde Amendment, which bars federal funding of abortion in almost all cases. “Deep-seated cultural codes, religious beliefs, and structural biases have to be changed,” she said in this regard last April. A writer for a left-wing publication likewise asserted in an article from July titled “The Next Big Fight for the Pro-Choice Movement: Taxpayer-Funded Abortions”:

"In the wake of the Supreme Court’s ruling against two abortion restrictions in Texas, the pro-choice movement is eager for an offensive. That means pushing to expand abortion coverage at the state level, too..."

Contrast this with the stand of Rav Aharon Lichtenstein, zt"l: "Abortion on demand is a moral abomination, whoever the fetus may be.” Specific to Noahide norms, Rav. J. David Bleich observes:

"Judaism teaches that Noahides are specifically enjoined from destroying fetal life upon penalty of death. Consequently, any aid extended to a gentile in the performance of an abortion is a violation of the precept 'Thou shalt not place a stumbling-block before the blind' (Lev. 19:14). It is instructive to note that, historically speaking, societies which condoned abortion invariably practiced infanticide as well...From the historical perspective, it is not at all surprising that in the aftermath of the 1973 Supreme Court decision in Roe v. Wade legalizing abortion, attempts are being made to effect what is tantamount to the legalization of infanticide." (Rav Bleich discusses related issues at 34:40 here.)
On the verse cited by Rav Bleich, consider the gravity of a vote that furthers subsidized abortions and associated violations of religious conscience. It is especially horrifying to reflect upon what such voting—along with related Israeli policies—signal to a general population when compared with the Radak on Jeremiah 2:33, discussed by Rabbi Gidon Rothstein at 4:00 here.

The foregoing is intertwined with Clinton's oppo‎sition to Noahide sexual morality both domestically and abroad. As her website states:

“Hillary will work with Congress to pass the Equality Act, continue President Obama’s LGBT equality executive actions, and support efforts underway in the courts to protect people from discrimination on the basis of gender identity and sexual orientation in every aspect of public life...Hillary will promote LGBT human rights and ensure America’s foreign policy is inclusive of LGBT people, including increasing our investment in the Global Equality Fund to advance human rights.” (Compare with a recent announcement by the Israeli government.)
So why do many Orthodox Jews seem callous to or ignorant of the Noahide Laws? A possible answer comes from another comment by the aforementioned blogger, posted publicly in July:

"In certain areas of Jewish study...I have fallen way short...I have for example hardly studied the Ramban on Chumash at all...And when it comes to Navi?...I know precious little of it.”
I do not believe that ignorance of the Prophets and callousness toward the Noahide Laws are coincidental. Among other benefits, studying the Prophets sensitizes a person to global themes and duties in Judaism. Rav Hershel Schachter notes, "All of hashkafa [religious outlook] comes from the Nevi'im, from the Nevi'im and Kesubim." (See 30:20 here. In that vein, a recent collection of Noahide addresses by the Lubavitcher Rebbe, zt”l, contains approximately two hundred references to the Nevi'im.)

Universal morality is not a chumra (stringency) in Judaism but a cornerstone of belief. As Rav Joseph B. Soloveitchik, zt”l, wrote:

“Our task was and still is to teach the Torah to mankind, to influence the non-Jewish world...In a word, we are to teach the world the seven mitzvot that are binding on every human being.”

It should be obvious that Jews fulfill that by affirming morality and defending civilization.

Posted by Just Another Hindu at 9:41 PM