Is Jordan Peterson becoming a Noahide? 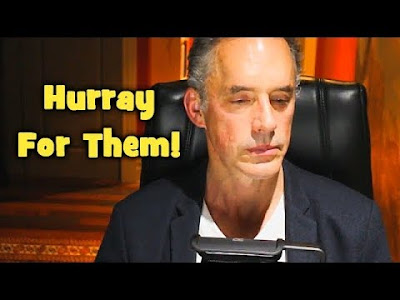 In 2018 the pro-Noahide Torah learning website www.Netiv.net uploaded a video from The Rubin Report run by Jewish libertarian/conservative commentator David Rubin. The video features a conversation between Jewish conservative Ben Shapiro and Christain conservative Joran Peterson. In the video, Shapiro presents the Jewish people as a priestly class who are to show non-Jews how God's people live, however non-Jews are not up to this task so Judaism has created the Noahide Laws for non-Jews which are simplified and less intense.  Jordan Peterson suggests the Noahide Laws are a psychological method to allow the Jews to keep group identity while still interacting with the outside world. Ben Shapiro has been suggesting to the Christian community that their religion is compatible with the Noahide Laws, even though according to Judaism, Christians are considered idolators and Jesus is said to be a blasphemer, sexual pervert and sorcerer (here). Jordan Peterson has also been interviewed by Rabbi Jonathan Sacks on behalf of the Chabad-Lubavitch organization, the sect mentioned in Public Law 102-14 which states it is America's responsibility to return the nation and the world to the Jewish Noahide Laws through education, a mission which would eventually lead to global execution of non-Jews (here).  The founder of Chabad's modern-day Noahide education movement, Rabbi Schneerson, has said that that non-Jews have no other purpose than to serve Jews and that their souls are satanic (here). Rabbis Sacks who interviewed Peterson for Chabad is also a proponent of the Noahide Laws and tries to clear Peterson of accusations of anti-Semitism. Why is Peterson proving validity to an ideology which preaches death for non-Jews, including Christians whom he presumes to speak for? Why is he associating with radical Jewish sects who obviously hate non-Jews and who have installed the Jewish Noahide Laws as the "foundation" of American civilization?  Why is he looking for vindication against claims of anti-Semitism from Rabbis who preach a doctrine which is anti-Gentile? Who owns this man?

Chabad
On Not Being a Victim
By Rabbi Jonathan Sacks

Making a series of programmes for the BBC on morality in the twenty-first century, I felt I had to travel to Toronto to have a conversation with a man I had not met before,She was in accute, incessant pain Canadian psychologist Jordan Peterson. Recently he has become an iconic intellectual for millions of young people, as well as a figure of caricature and abuse by others who should know better.1 The vast popularity of his podcasts – hours long and formidably intellectual – suggests that he has been saying something that many people feel a need to hear and are not adequately hearing from other contemporary voices.


During our conversation there was a moment of searing intensity. Peterson was talking about his daughter Mikhaila. At the age of six, she was found to be suffering from severe polyarticular juvenile idiopathic arthritis. Thirty-seven of her joints were affected. During her childhood and teen years, she had to have a hip replacement, then an ankle replacement. She was in acute, incessant pain. Describing her ordeal, Peterson’s voice was wavering on the verge of tears. Then he said:


One of the things we were very careful about and talked with her a lot about was to not allow herself to regard herself as a victim. And man, she had reason to regard herself as a victim … [but] as soon as you see yourself as a victim … that breeds thoughts of anger and revenge – and that takes you to a place that's psychologically as terrible as the physiological place. And to her great credit I would say this is part of what allowed her to emerge from this because she did eventually figure out what was wrong with her, and by all appearances fix it by about 90%. It’s unstable but it’s way better because of the fact that she didn't allow herself to become existentially enraged by her condition … People have every reason to construe themselves as victims. Their lives are characterised by suffering and betrayal. Those are ineradicable experiences. [The question is] what's the right attitude to take to that – anger or rejection, resentment, hostility, murderousness? That’s the story of Cain and Abel, [and] that's not good. That leads to Hell.

As soon as I heard those words I understood what had led me to this man, because much of my life has been driven by the same search, though it came about in a different way. It happened because of the Holocaust survivors I came to know. They really were victims of one of the worst crimes against humanity in all of history. Yet they did not see themselves as victims. The survivors I knew, with almost superhuman courage, looked forward, built a new life for themselves, supported one another emotionally, and then, many years later, told their story, not for the sake of revisiting the past but for the sake of educating today’s young people on the importance of taking responsibility for a more human and humane future.
But how is this possible? How can you be a victim and yet not see yourself as a victim without being guilty of denial, or deliberate forgetfulness, or wishful thinking?
The answer is that uniquely – this is what makes us Homo sapiens – in any given situation we can look back or we can look forward. We can ask: “Why did this happen?” That involves looking back for some cause in the past. Or we can ask, “What then shall I do?” This involves looking forward, trying to work out some future destination given that this is our starting point.
There is a massive difference between the two. I can’t change the past. But I can change the future. Looking back, I see myself as an object acted on by forces largely beyond my control. Looking forward, I see myself as a subject, a choosing moral agent, deciding which path to take from here to where I want eventually to be.
Both are legitimate ways of thinking, but one leads to resentment, bitterness, rage and a desire for revenge. The other leads to challenge, courage, strength of will and self- control. That for me is what Mikhaila Peterson and the Holocaust survivors represent: the triumph of choice over fate.
Jordan Peterson came to his philosophy through his own and his father’s battles with depression and his daughter’s battle with her physical condition. Jews came to it through the life-changing teachings of Moses, especially in the book of Deuteronomy. They are epitomised in the opening verses of our parsha.

Throughout Deuteronomy, Moses keeps saying: don’t think your future will be determined by forces outside your control. You are indeed surrounded by forces outside your control, but what matters is how you choose. Everything else will follow from that. Choose the good and good things will happen to you. Choose the bad, and eventually you will suffer. Bad choices create bad people who create bad societies, and in such societies, in the fullness of time, liberty is lost. I cannot make that choice for you.
The choice, he says again and again, is yours alone: you as an individual, second person singular, and you as a people, second person plural. The result was that remarkably, Jews did not see themselves as victims. A key figure here, centuries after Moses, was Jeremiah. Jeremiah kept warning the people that the strength of a country does not depend on the strength of its army but on the strength of its society. Is there justice? Is there compassion? Are people concerned about the welfare of others or only about their own? Is there corruption in high places?
Do religious leaders overlook the moral failings of their people, believing that all you have to do is perform the Temple rituals and all will be well: G‑d will save us from our enemies? Jeremiah kept saying, in so many words, that G‑d will not save us from our enemies until we save ourselves from our own lesser selves.
When disaster came – the destruction of the Temple – Jeremiah made one of the most important assertions in all history. He did not see the Babylonian conquest as the defeat of Israel and its G‑d. He saw it as the defeat of Israel by its G‑d. And this proved to be the salvaging of hope. G‑d is still there, he was saying. Return to Him and He will return to you. Don’t define yourself as a victim of the Babylonians. Define yourself as a free moral agent, capable of choosing a better future.
Jews paid an enormous psychological price for seeing history the way they did. “Because of our sins we were exiled from our land,” we say repeatedly in our prayers. We refuse to define ourselves as the victims of anyone else, Egyptians, Assyrians, Babylonians, fate, the inexorability of history, original sin, unconscious drives, blind evolution, genetic determinism or the inevitable consequences of the struggle for power. We blame ourselves: “Because of our sins.”
That is a heavy burden of guilt, unbearable were it not for our faith in Divine forgiveness. But the alternative is heavier still, namely, to define ourselves as victims, asking not, “What did we do wrong?” but “Who did this to us?”
“See, I am setting before you today a blessing and a curse.” That was Moses’ insistent message in the last month of his life. There is always a choice. As Viktor Frankl said,Never define yourself as a victim even in Auschwitz there was one freedom they could not take away from us: the freedom to choose how to respond. Victimhood focuses us on a past we can’t change. Choice focuses us on a future we can change, liberating us from being held captive by our resentments, and summoning us to what Emmanuel Levinas called Difficile Liberte, “difficult freedom.”
There really are victims in this world, and none of us should minimise their experiences. But in most cases (admittedly, not all) the most important thing we can do is help them recover their sense of agency. This is never easy, but is essential if they are not to drown in their own learned helplessness. No one should ever blame a victim. But neither should any of us encourage a victim to stay a victim. It took immense courage for Mikhaila Peterson and the Holocaust survivors to rise above their victimhood, but what a victory they won for human freedom, dignity and responsibility.
Hence the life changing idea: Never define yourself as a victim. You cannot change your past but you can change your future. There is always a choice, and by exercising the strength to choose, we can rise above fate.
FOOTNOTES
1.

The fact that he has been accused of being an anti-semite makes me deeply ashamed of those who said this. There is enough real antisemitism in the world today for us to focus on the real thing, and not portray as an enemy a man who is a friend.
2.

Rabbi Lord Jonathan Sacks is an international religious leader, philosopher, and respected moral voice. The author of over 30 books, Rabbi Sacks has received multiple awards in recognition of his work including the 2016 Templeton Prize. He is the recipient of 18 honorary doctorates, was knighted by Her Majesty The Queen in 2005 and made a Life Peer, taking his seat in the House of Lords in October 2009. He served as the Chief Rabbi of the United Hebrew Congregations of the Commonwealth from 1991 to 2013. To read more writings and teachings by Lord Rabbi Jonathan Sacks, please visit www.rabbisacks.org.
Sefira Ross is a freelance designer and illustrator whose original creations grace many Chabad.org pages. Residing in Seattle, Washington, her days are spent between multitasking illustrations and being a mom.

Posted by Just Another Hindu at 6:41 AM