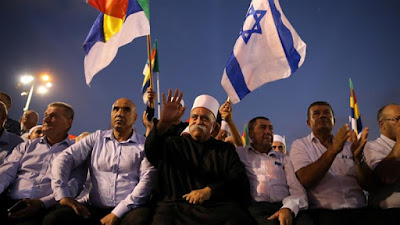 In 2004 leader of the Israeli Druze community, Sheikh Mowafak Tarif, signed a declaration calling upon non-Jews in Israel to observe the Jewish Noahide Laws. While such declarations may make it seem as though the Jewish Noahide Laws accept all faiths, it is rarely reported that according to the Noahide agenda all non-Jewish communities must set up "Religious Councils" which are charged with analyzing the religion and removing those aspects which do not comply with Jewish Noahide Law, leaving behind only the more cultural elements of the faith or nation so that the native population can be more easily converted to Noahidism (here). Similar declarations have been signed by the Vatican (here) and Islamic communities (here). With so many religious leaders committing their communities and resources to the Jewish Noahide agenda it makes one wonder how far away are the Zionists from having the ability and power to enact the Jewish Noahide Laws and kill non-Jews who commit "idolatry" (including Christianity), blasphemes the Jewish god, or commit "sexual immorality"; not to mention that the prohibitions against murder and theft do not apply when Jews murder and steal from non-Jews (here).

The spiritual leader of the Druze community in Israel, Sheikh Mowafak Tarif, this weekend signed a declaration calling on non-Jews in Israel to observe the Seven Noahide (Bnei Noach) Commandments, as laid down in the Bible and expounded upon in Jewish tradition.

Several weeks ago, the mayor of the primarily Druze city of Shfaram, in the Galilee, also signed the document.

The declaration includes the commitment to make a better "humane world based on the Seven Noachide Commandments and the values they represent commanded by the Creator to all mankind through Moses on Mount Sinai."

Behind the efforts to spread awareness of the Torah’s Seven Universal Laws is Rabbi Boaz Kelly, of the directors of Chabad-Lubavitch institutions in the Krayot area of Haifa and the chairman of the Worldwide Committee for the Seven Noahide Commandments. The recent signature by Sheikh Tarif is part of Rabbi Kelly’s ongoing efforts among Israel’s non-Jewish community. In the past few years, Rabbi Kelly’s organization has placed roadside ads in Arabic calling for observance of the Noahide Laws, as well as distributing Arabic-language pamphlets on the subject among Arabs in Israel and the Palestinian Authority.

Support for the spread of the Seven Noahide Commandments by the Druze spiritual leader contains within it echoes of the Biblical narrative itself. The Druze community reveres as a prophet the non-Jewish father-in-law of Moses, Jethro (Yitro), whom they call Shu’eib. According to the Biblical narrative, Jethro joined and assisted the Jewish people in the desert during the Exodus, accepted monotheism, but ultimately rejoined his own people. The Tiberias tomb of Jethro is the most important religious site for the Druze community.
Posted by Just Another Hindu at 4:58 AM