Presidential hopeful Cory Booker is a Noahide, his election could spell mass murder for non-Jews 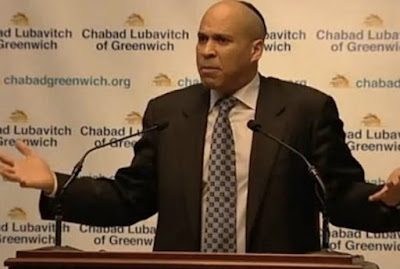 Cory Booker is a 2020 Democratic presidential candidate. Even though Cory is not Jewish his Rabbi is Shmuley Boteach, a Chabad-Lubavitch Rabbi. Shmuley Boteach is a supporter of non-Jews following the Noahide Laws and has claimed that Christianity is "heresy", an accusation which calls for the death penalty under Noahide Law (here). Rabbi Boteach runs a Jewish outreach organization called The World Value Network and on their website you can find an article about how Cory Booker and Shmuley Boteach became friends. Cory Booker became a member of The L’Chaim Society Oxford’s Chabad house while in college. According to Booker, he gave a speech for the society in which he referenced the Noahide Laws. Rabbi Boteach was an attendant at this lecture and because of Corey's dedication to the Noahide Laws he made Booker the first "goy" ever to be appointed co-president of a Chabad house.  Cory Booker is not just a "goy" but a Noahide, he is running for president of the United States and has pleaded allegiance to Judaism and to perhaps do his best to create a Noahide state and mass murder non-Jews.  If made president, Cory would have the power to enact Public Law 102-14 and begin the slaughter if he so chose (here).