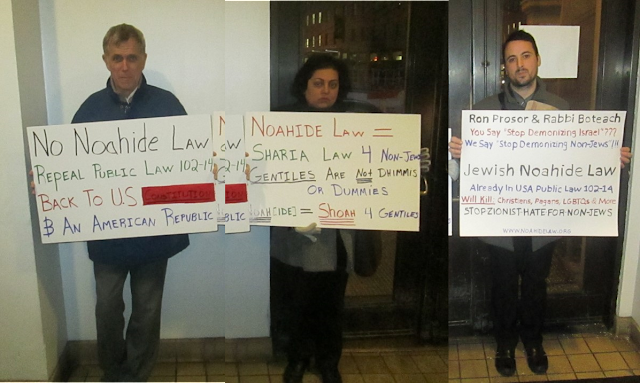 
On February 17th 2015 at Cooper Union College in NYC three STOP NOAHIDE LAW activists attended the event “Fight The Global Demonization of the Jewish State” which featured Israeli Ambassador to the UN, Ron Prosor. The event was hosted by Rabbi Shmuley Boteach and his organization “This World: The Values Network“. We attended to demonstrate and educate against the Jewish Noahide Laws, discriminatory Jewish theocratic laws which have been passed into American federal legislation via Public Law 102-14. (here) If left uncontested this law along with the Jewish organizations and leaders who support it will create an environment of hatred and violence against dissident non-Jews. The organizer of the event Rabbi Boteach supports the Jewish Noahide Laws and so we took this opportunity to confront him and his supporters.

"Judaism, however, is a supremely universalist religion, teaching that there are several paths to the one, true God. A non-Jew does not enhance his existence by becoming Jewish, and indeed a righteous Gentile who leads a godly and moral life will inherit the same place in the world-to-come as a Jew. Nine hundred years ago, Maimonides wrote that non-Jews who live by the seven Noahide commandments would inherit the same place in heaven as a Jew." - Rabbi Boteach, "Judaism For Everyone", p. 411

For Jews the Belief That God Can Be Human Is the Ultimate Heresy … The belief that God could have been born of a human womb, or could once have walked the earth, is so foreign to Judaism that it is rejected even by the most assimilated Jews. … Christianity, however, sees in Jesus the incarnation and embodiment of the Second Person of the Trinity, the Son. - Rabbi Boteach, Judaism For Everyone, p. 404-405


As we approached the Great Hall entrance at Cooper Union, we ran into Rabbi Boteach himself, sitting outside in a black SUV smoking a white cigar. He saw our signs and said he would talk to us inside after he finished his conference call. Rabbi Smuley Boteach is a well known pro-Israel Chabad-Lubavitch Rabbi. Yes, Rabbi Boteach is a member of the very same sect which imposed Jewish Noahide Law in America under Public Law 102-14. Rabbi Boteach, as show above is also an avid supporter of Jewish Noahide Law and a “demonizer” of Christianity, heavily implying that Christians are “heretics”, an accusation which would bring them death under the Noahide Laws. Later on, Rabbi Boteach met us in the lobby and looked over our signs, shaking his head up and down. He asked us what our problem was with the Noahide Laws. When we told him they were discriminatory against non-Jews and even advocated our deaths he replied, “well I would be against that if it were happening”… but this dodged the bigger question as to why these laws are being brought into the United States in the first place. He took a picture with us and said he would tweet it, but I don't think he ever did.


After Rabbi Boteach left, we were instructed to take our demonstration outside the lobby where a long line of supporters were lining up. All three of us held up our signs and distributed our prepared fliers. We got some strong reactions from the crowd:

Activist Mohini: “I started explaining we were here to peacefully protest and repeal the Noahide Laws under Public Law 102-14 and to prevent the subversion of the US constitution and secular values. Many did not want to accept the fliers I was passing out and approached me with a prejudicial and closed minded attitude. Some started yelling “anti-Semite”, others ripped up the flier and threw it back at me. It became clear to me that most of these people were not interested in “justice”, they were interested in “Just Us” and maintaining their supremacist views.

Activist Bob: I met one extremely nice and intelligent man who was raised in a liberal Jewish family. He seemed to know exactly what the Noahide Laws were all about and was very much against them, he just wanted everyone to live in peace. But many of the other people simply had a persecution complex, they didn’t care to talk about the Noahide Laws but only about how much everyone hates the Jews. Others just shouted “ridiculous”!

Activist Vincent Bruno: I was shocked by the level of disingenuousness of the people, they cared for nothing but to jeer and laugh at us and come up with absurd excuses for their support of Noahide Law. They started yelling “why don’t you protest ISIS”… I said “WE DO!!!” Some people actually believe that you can’t be against both Sharia and Noahide Law. And how on earth does ISIS make the Noahide Laws ok anyway? One man at first admitted that the Noahide Laws existed and that there were actually converts to the laws, people called Noahides, but then quickly changed his story and said the whole thing was a conspiracy theory, a “Jews own the whole world, Protocols of the Elders of Zion thing”. None of us reads the Protocols of the Elders of Zion, an obvious forgery… we stick to Jewish sources, thanks. Others could only talk about all the injustices done against Jews, but not one of them cared to side against Noahide Laws. 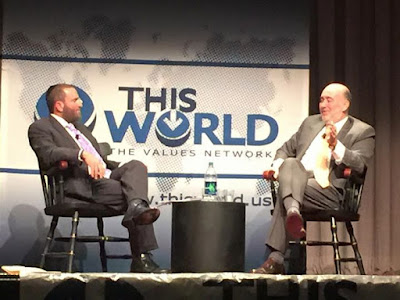 It was interesting to see Israeli UN Ambassador Ron Prosor speaking against the global demonization of Israel while sitting on stage with a Chabad Rabbi who promotes the Noahide Laws which demonize non-Jews. Ron Prosor himself has been closely associated with the Noahide Chabad sect, though he does not seem to have weighed in on the issue of Noahide Law himself . His speech focused mainly on preventing the nuclear armament of Islamic Iran. Much else dealt with the growing “anti-Semitism” in the world. Ironically Ron Prosor stated that hate for Jews starts with attitudes and education which demonizes them, but the attitudes and education efforts of organizations like Chabad promote Jewish supremacism and hatred for non-Jews via Noahidism; that’s kind of hypocritical isn't it?


One of the student from the Israel Club at Stern College gave a short speech on how Jews are here to be a light onto the nations and be an ethical role model. Bigoted Jewish theocracy under Noahide Law is not a “light” but a dark shroud of tyrannical hate. They have nothing to do with morals or ethics, they are simple Jewish hegemony and supremacy.

We were actually able to speak with Rabbi Boteach’s son Mendy after the conference. He said that he knew about our “Noahide Law” website and felt that we misunderstood Noahide Law and Rabbi Schneerson’s quotes stating that non-Jews were satanic. (here) He told us that Judaism is the only religion in the world which gives everyone a chance for salvation under the Noahide Laws. An associate of his said “The Noahide Laws Are Beautiful!”… the Noahide Laws may be beautiful for those seeking a world of Zionist hegemony but not for the non-Jews of the world who wish for freedom of religion, freedom of speech and freedom of sexual expression.


In the end we were all glad we attended, we felt emboldened by our activism and are now thirsty to do more to spread the word and work to repeal Public Law 102-14. It is a long road ahead, but armed with knowledge we know we can bring down this tyranny, together. Hope to see you at an event sometime soon!
Posted by Just Another Hindu at 6:30 PM