Adultery only a crime for women and non-Jews under Noahide Law? 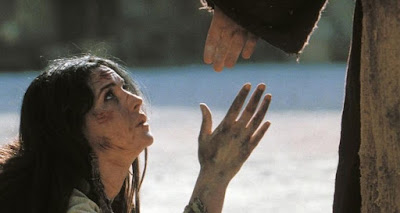 The Noahide Law against "sexual immorality" includes adultery.  However according to the Talmud women are always executed for sex outside of marriage, and so are non-Jews,  however Jewish men are permitted to have sex with the wives of minors and non-Jews without execution; the only time a Jewish man is executed for adultery is if he sleeps with the wife of another Jew.  A Noahide who has accepted the Noahide Laws may escape execution for adultery with another Noahide if he converts to full Judaism, however he cannot escape execution if he commits adultery with a Jew. The Talmud states of a theory that a woman may be brought forth only on the accusation of adultery by her husband, she is stripped to the waist and given a cup of poison to drink, if she is innocent it is believed she will live, however if she is guilty it is believed she will die from the poison. Are American women and non-Jews really expected to consider these kinds of laws and ideas to be sound and reasonable under Public Law 102-14?

A Noachid who slays another Noachid, or worships idols, or blasphemes, or has illicit connection with the wife of another Noachid, and then becomes a proselyte, is free from punishment. If, however, he has killed an Israeli (Sanh. 71b; “Yad,” l.c. x. 4). - Noahide Laws, 1906 Jewish Encyclopedia

As women only accused of adultery by her husband (without evidence) is striped to the waist in public, dressed in black and her jewelry removed to make her repulsive

MISHNAH. … IF SHE SAYS, 'I AM PURE', THEY BRING HER UP TO THE EAST GATE WHICH IS BY THE ENTRANCE OF NICANOR'S GATE WHERE THEY GIVE SUSPECTED WOMEN WATER TO DRINK, PURIFY WOMEN AFTER CHILDBIRTH, AND PURIFY LEPERS. A PRIEST SEIZES HER GARMENTS — IF THEY ARE RENT THEY ARE RENT, AND IF THEY BECOME UNSTITCHED THEY ARE UNSTITCHED UNTIL HE UNCOVERS HER BOSOM, AND HE UNDOES HER HAIR. R. JUDAH SAYS: IF HER BOSOM WAS BEAUTIFUL HE DOES NOT UNCOVER IT, AND IF HER HAIR WAS BEAUTIFUL HE DOES NOT UNDO IT. — IF SHE WAS CLOTHED IN WHITE, HE CLOTHES HER IN BLACK. IF SHE WORE GOLDEN ORNAMENTS AND NECKLACES, EAR-RINGS AND FINGER-RINGS, THEY REMOVE THEM FROM HER IN ORDER TO MAKE HER REPULSIVE. AFTER THAT [THE PRIEST] TAKES A COMMON ROPE AND BINDS IT OVER HER BREASTS. WHOEVER WISHES TO LOOK UPON HER COMES TO LOOK WITH THE EXCEPTION OF HER MALE AND FEMALE SLAVES, BECAUSE HER HEART IS MADE DEFIANT THROUGH THEM. ALL WOMEN ARE PERMITTED TO LOOK UPON HER, AS IT IS SAID, THAT ALL WOMEN MAY BE TAUGHT NOT TO DO AFTER YOUR LEWDNESS. - Soncino 1961 Babylonian Talmud, Sotah 7a-7b

Woman accused of adultery is forced to drink a cup of "bitter water" (poison), if she is innocent she will survive, if she is guilty she will die from the poison

and if she be not innocent, she reverts to dust.21

FOOTNOTE 21. Dies from the effect of the water.

Betrothed women are executed for adultery

GEMARA. … Shila taught: There are three modes [of execution] in the case of a [betrothed] damsel [who played the harlot]. - 1961 Soncino Babylonian Talmud, Kethuboth 44b

GEMARA. … "He who commits adultery with a married woman is executed by strangulation …" - 1961 Soncino Babylonian Talmud, Sanhedrin 107

MISHNAH. THE FOLLOWING ARE STONED: … HE WHO COMMITS ADULTERY WITH A BETROTHED MAIDEN … 1961 Soncino Babylonian Talmud, Sanhedrin 53a

Posted by Just Another Hindu at 9:37 AM