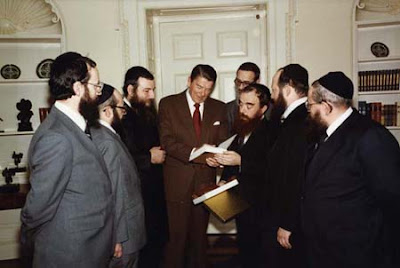 Public Law 102-14 which states that the Jewish Noahide Laws are the foundation upon which American civilization was founded and that it is our responsibility to educate America and even the world so as to return them to these laws was signed in 1991 (here), however this law was preceded by proclamations of other presidents which endorsed the Noahide Laws and Rabbi Schneerson, the Chabad Rabbi who said that non-Jews like all of creation exist only for the benefit of Jews. (here) In 1982 then President Ronald Reagan signed Proclamation 4921 in which he stated that the Noahide Laws are the moral foundation of America's character, that the Noahide Laws are a moral code for all regardless of faith, and he also praised the Lubavitch movement and Rabbi Schneerson for their example in educating about the Jewish Noahide Laws. He then requested congress to sign Joint Resolution 477 which celebrates Rabbi Schneerson's birthday as a "National Day of Reflection". The Noahide Laws state that "idolaters" and even Christians (here) are to be killed, how on earth could Jewish Noahide Law be a moral code for all regardless of faith? Further, Rabbi Schneerson himself wrote to Reagan on his signing of the proclamation thanking him for affirming the eternal validity of the Noahide Laws and in parentheses added "(with all their ramification)", which would obviously include the death penalty for homosexuals, Christians, pagans, atheists and so much more.

By the President of the United States of America
A Proclamation

Amid the distractions and concerns of our,daily existence, it is appropriate that Americans pause to reflect upon the ancient ethical principles and moral values which are the foundation of our character as a nation.

We seek, and steadfastly pursue, the benefits of education. But education must be more than factual enlightenment—it must enrich the character as well as the mind.

One shining example for people of all faiths of what education ought to be is that provided by the Lubavitch movement, headed by Rabbi Menachem Schneerson, a worldwide spiritual leader who will celebrate his 80th birthday on April 4, 1982. The Lubavitcher Rebbe's work stands as a reminder that knowledge is an unworthy goal unless it is accompanied by moral and spiritual wisdom and understanding. He has provided a vivid example of the eternal validity of the Seven Noahide Laws, a moral code for all of us regardless of religious faith. May he go from strength to strength.

In recognition of the Lubavitcher Rebbe's 80th birthday, the Senate and the House of Representatives of the United States in Congress assembled have issued House Joint Resolution 447 to set aside April 4, 1982, as a "National Day of Reflection."

NOW, THEREFORE, I, RONALD REAGAN, President of the United States of America, do hereby proclaim April 4, 1982, as National Day of Reflection.

IN WITNESS WHEREOF, I have hereunto set my hand this 3rd day of April, in the year of our Lord nineteen hundred and eighty-two, and of the Independence of the United States of America the two hundred and sixth.

...By focusing attention on "the ancient ethical principles and moral values which are the foundation of our character as a nation," and on the time-honored truth that "education must be more than factual enlightenment—it must enrich the character as well as the mind," while reaffirming the eternal validity of the G‑d-given Seven Noahide Laws (with all their ramifications) for people of all faiths—you have expressed most forcefully the real spirit of the American nation. - "The Rebbe’s Guidance to Presidents of the United States", Compiled by Dovid Zaklikowski

Posted by Just Another Hindu at 12:06 PM