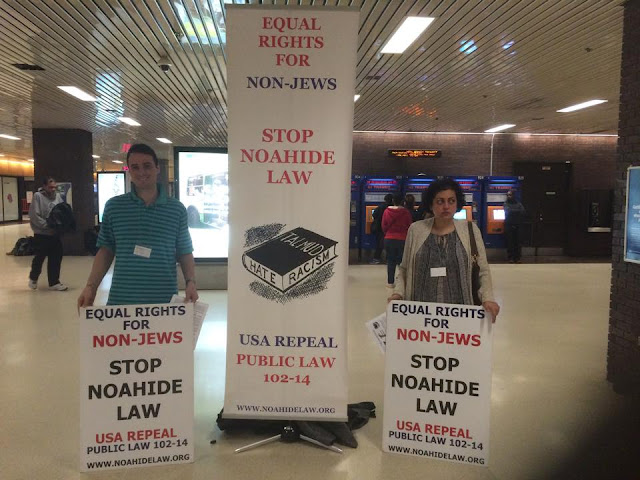 In 2015 #StopNoahideLaw acquired free speech permits to demonstrate in the most busy transportation terminals in NYC, the Port Authority and Grand Central Station.  We spend two solid weeks in each station with a total of 1 month of public messaging.  Hundreds of thousands of commuters must have seen our signs and posters and we handed out thousands of fliers on Noahide Law.  Some Jews were unhappy with our presence but for the most part they ignored our demonstration and even though there were applications filed to have our permits revoked our free speech was never interrupted. If you simply state the facts there is very little resistance to the movement. Noahide Law is Jewish religious law which seeks to regulate the speech, religion and sexuality of non-Jews; those who blaspheme the Jewish god, practice a religion not approved of by Judaism or engage in "sexual immorality" as defined by the Talmud are subject to the death penalty.  Jewish Noahide Law was signed into federal law via Public Law 102-14 which states that Noahide Law is the foundation upon which the American civilization was founded and that it is our nation's responsibility to educate our own country and even the world to return them to the practice of Jewish Noahide Law. Click "table of contents" above to learn more about Noahide Law. 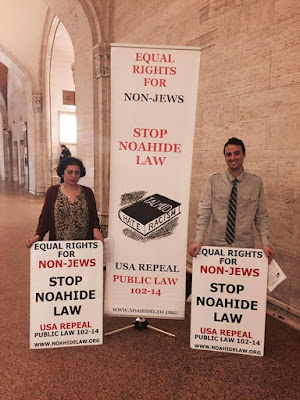 Posted by Just Another Hindu at 3:07 PM