Pro-Noahide Jews oppose American abortion, but only because they own the fetus of non-Jews 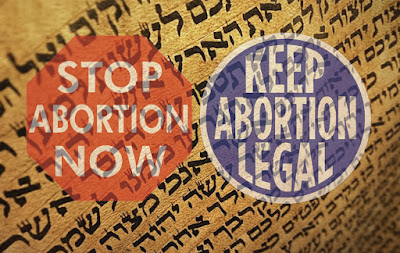 A non-Jew's entire reality is only vanity. It is written, "And the strangers shall stand and feed your flocks" [Isaiah 61:5]. The entire creation [of a non-Jew] exists only for the sake of the Jews. Because of this a non-Jew should be punished with death if he kills an embryo, while a Jew, whose existence is most important, should not be punished with death because of something subsidiary. We should not destroy an important thing for the sake of something subsidiary. - (Rabbi Schneerson)

Menachem Ben-Mordechai of the Israeli National News wrote an article in which he supported Trump's anti-abortion direction as keeping with the "universal morality" of the Jewish Noahide Laws. Mordechai implies that Jewish law holds the human fetus in high regard and is designed to protect it, he also states that it would be against Jewish Law to "stumble" non-Jews by allowing abortion among them.  However this stance is deceptive as Rabbi Schneerson, the Rabbi mentioned in Public Law 102-14, made it absolutely clear the only reason a non-Jew is to be killed for having an abortion is because they only exist to serve Jews, the fetus of the non-Jew is Jewish property the same as would be the fetus of a domestic animal.  However, Jews are never punished for abortion because the life of an adult Jew is considered more valuable than an unborn fetus (here). Mordechai implies that abortion will lead to infanticide, meanwhile the Talmud makes legal loopholes which allow Jews to practice child sacrifice (here). The same writer wrote an article for the Jewish Press advocating for Noahides and Jews to begin applying the Noahide death penalty now (here).

President Trump soon after praised the March for Life in Washington, D.C., attended by Vice President Mike Pence as the first vice president to ever do so. Consistent with his statement after winning the election that “I will be appointing pro-life judges,” on January 31 pro-life leaders applauded President Trump's nomination of Judge Neil Gorsuch to the Supreme Court.

By contrast, President Trump's opponent not only considered abortion a “right” but sought its subsidy with a platform to repeal the Hyde Amendment and similar state laws. As two pro-life Democrats wrote in July:

"The Democratic Party's abortion stances have already caused many to leave the party, and many more will drop out because of the platform wording. The percentage of extreme abortion rights advocates is increasing in the party..."

Many traditional Americans feel inspired by the new administration. Anne Nudi, a nurse and professor who attended the March for Life, said:

"I feel empowered. I feel positive. I feel encouraged about the future. And I feel blessed that I have a president who is supportive of our cause.”

Jews worldwide should feel likewise about that support, which advances universal morality ordained by the Seven Noahide Laws. "Judaism abhors the termination of any life, including that of a fetus,” Rabbi Shlomo Brody notes. “[T]he notion that abortion is simply a woman's prerogative, as advocated in 'pro-choice' circles, is entirely absent from traditional Jewish sources.”

Speaking about abortion in 1975, Rav Joseph B. Soloveitchik, zt"l, commented that "to me it is something vulgar, this clamor of the liberals that abortion be permitted." Rav Aharon Lichtenstein, zt"l, similarly wrote, "Abortion on demand is a moral abomination, whoever the fetus may be."

Specifically in a Noahide context, Rabbi Shimon Cowen observes in The Theory and Practice of Universal Ethics--The Noahide Laws, "The opposition of Noahide law to the abortion of an unborn life, except in very special circumstances, embodies one of the deepest norms of human society, the protection of life." Concerning Jewish facilitation of gentile abortion, Rabbi J. David Bleich writes:

"...any aid extended to a gentile in the performance of an abortion is a violation of the precept 'Thou shalt not place a stumbling-block before the blind' (Lev. 19:14). It is instructive to note that, historically speaking, societies which condoned abortion invariably practiced infanticide as well...From the historical perspective, it is not at all surprising that in the aftermath of the 1973 Supreme Court decision in Roe v. Wade legalizing abortion, attempts are being made to effect what is tantamount to the legalization of infanticide."

By increasing protection of unborn life, America moves in a profoundly humane direction. May this Noahide moment grow both domestically and abroad.

The writer made aliya in 2009, previously wrote under the name Myles Kantor.

Posted by Just Another Hindu at 6:18 AM