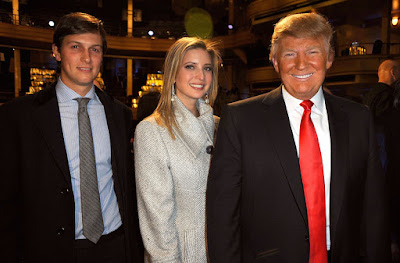 Ivanka Trump converted to the Chabad-Lubavitch tradition of Judaism to marry her husband Jared Kushner.  Before the election in 2016 Invaka visited the grave of Rabbi Schneerson to pray for her father's victory.  Rabbis Scheerson and Chabad Lubavitch are the very ones mentioned in Public Law 102-14 which proclaims that the Jewish Noahide Laws are the foundation of American civilization and that we must educate the nation so as to return to these laws (here). Further in 2018 both Ivanka and Jared were blessed by Israeli Chief Rabbi Yosef who has stated that non-Jews living in Israel must follow Noahide Law or be expelled. He also called Black people monkeys as the Talmud proclaims Blacks are cursed "creatures (here). As the Noahide Laws also prohibit "sexual immorality" on pain of death (here) the same Rabbi also called women who dress promiscuously "animals". Ivanka and Jared are both very influential in the United Sates government, is this what they are planning, are they planning to usher in a Noahide State where non-Jews would be murdered as they view them as little more than livestock?

As presidential candidate Donald Trump spent his weekend barnstorming swing states and rallying crowds to his cause, his daughter Ivanka and son-in-law Jared Kushner, a key campaign adviser, teamed up to seek support from a higher power.

The couple, who are observant Jews – Ivanka having converted to Judaism before her marriage – stayed off the campaign trail and in New York City over Shabbat – and were spotted on Saturday night at the site of the grave of the Lubavitcher rebbe in Queens, NY.

The site they visited is known as "The Ohel" – the Hebrew word for “tent” – and it is the structure build over the grave of the venerated seventh Lubavitcher Rebbe Menachem M. Schneerson, who was buried there alongside his father-in-law in 1994. -

Yahoo News
"Ivanka Trump was blessed by a rabbi
who said women who dress immodestly are like animals"
May 14, 2018
https://www.yahoo.com/lifestyle/ivanka-trump-blessed-rabbi-said-women-dress-immodestly-like-animals-214837124.html

Invanka And Jared Kushner Blessed By Pro-Noahide Rabbi
And in 2016, the Times of Israel reported that Rabbi Yosef remarked that non-Jewish people should not live in Israel if they don’t obey the laws of Judaism. “According to Jewish law, gentiles should not live in the Land of Israel,” Yosef reportedly said. “If a gentile does not agree to take on the seven Noahide Laws, we should send him to Saudi Arabia. When the true and complete redemption arrives, that is what we will do.” - Yahoo News

Ivanka Trump Blessed By Rabbi Who Called Blacks Monkeys/Women Animals
Ivanka Trump was blessed by a controversial rabbi, Yitzhak Yosef, who once implied that women who dress immodestly are “animals,” that black people are “monkeys,” and that non-Jewish people should not live in Israel unless they respect its religious laws. - Yahoo News

Posted by Just Another Hindu at 8:19 AM