Slavery of non-Jews in the Talmud 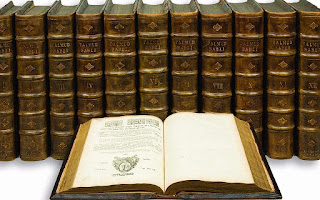 The Talmud is very complicated, not every statement is a law, sometimes it is a commentary or the opinion of a certain Rabbi, sometimes a stipulation or refutation, however the quotes below should give you a good idea about Talmudic reasoning on certain issues.

According to the Talmud non-Jews (gentiles) should not be freed from slavery except for payment, children born of non-Jewish may be sold into permanent slavery, however this should never be done to the children of Jews.

GENTILES SHOULD NO BE FREE, EXCEPT FOR PAYMENT

“Rabbah said: For these three offences men become impoverished: for emancipating their [heathen] slaves, for inspecting their property on Sabbath, and for taking their main Sabbath meal at the hour when the discourse is given in_the Beth Hamidrash. For so R. Hiyya b. Abba related in the name of R. Johanan, that there were two families in Jerusalem, one of which used to take its main meal on Sabbath [at the hour of the discourse] and the other on the eve of Sabbath_[4]  and both of them became extinct.”_“The question was asked: [Does a slave who is thus liberated] require a deed of emancipation or not? — Come and hear: R. Hiyya b. Abin said in the name of Rab; Both the one and the other become free men, and they require deeds of emancipation. Rabbah said: I raise an objection against my own statement[8] from the following: ‘If a man sanctifies his property and some slaves are included in it, the treasurers [of the Sanctuary] are not allowed to emancipate them_[9]  but they must sell them to others,_[10]  and these others are allowed to emancipate them. Rabbi says: My view is that the slave can pay his own purchase price[11] and liberate hiniself_[12] because the treasurer in that case as it were sells him to himself’? — Do you seek to confute Rab from the Mishnah? Rab is himself [considered] a Tanna and is allowed to differ.” - 1962  Soncino Babylonian Talmud, Gittin 38b

FOOTNOTES:
4. [Lit., 'money.' Lev. XXV, 47. from which we learn that a heathen may acquire an
Israelite as slave, speaks expressly of 'purchase money', v. verse 51.]
5. This word seems here to have the double meaning of ‘presumptive title’ (supposing that the original owner has given up hopes of recovering him), and
‘act of possession,’ e.g., making the slave serve him. The question thus remains.
— Was the brigand the rightful owner?
6. Israel were forbidden to occupy the territory of Ammon and Moab (Deut. I , 9,
19). Sihon had taken some of the land of Moab (Num. XXI, 26), and this the Israelites were permitted to conquer from him and occupy. (Cf. Jud. XI, 15 ff.). This shows that a heathen can acquire ownership by act of possession.
7. Num. XXI, 1. The lesson is derived from the fact that the Israelites taken by the king of Arad are called ‘captives’.
8. V. B.B. 173a.
9.  V. infra 74a and notes.
10. V. Sanh. 31a.
11. That in any case the slave returns to slavery.
12. That even if we ransomed her for freedom, she must again become a slave.

CHILDREN BORN OF GENTILES MAY BE PURCHASED  AS PERMANENT SLAVES,
BUT THIS SHOULD NOT BE DONE TO JEWS

Posted by Just Another Hindu at 9:24 AM