Pedophilia in the Talmud 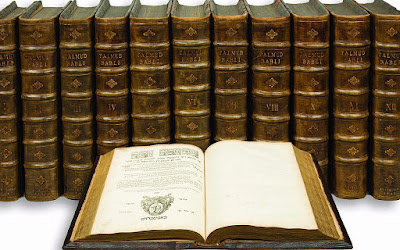 The Talmud is very complicated, not every statement is a law, sometimes it is commentary or the opinion of a certain Rabbi, sometimes a stipulation or refutation, however, the quotes below should give you a good idea about Talmudic reasoning on certain issues.

The standard in the Talmud is that girls can be married and are ready for coitus at the age of three and so are captive slave girls, while boys may be sodomized without penalty between the ages of three and nine. Non-Jewish boys only defile the Jew during sex above the age of 9.  Mothers who have sex with their eight-year-old sons are not rendered impure from the act, and girls below eleven years old are prohibited from using contraception during sex. Captive non-Jewish slave girls may be married to priests earlier than three-years-old and the Talmud says the warrior Joshua tested slave girls' virginity by inserting bottles of wine into them, though he was supposed to test them for "dropsy" instead.

“If a woman sported lewdly with her young  son [a minor], and he committed the first stage of cohabitation with her, — Beth Shammai say, he thereby renders her unfit to the priesthood [4]. Beth Hillel declare her fit. R. Hiyya the son of Rabbah b. Nahmani said in R. Hisda’s name; others state, R. Hisda said in Ze’iri’s name: All agree that the connection of a boy aged nine years and a day is a real connection; whilst that of one less than eight years is not: [5] their dispute refers only to one who is eight years old, Beth Shammai maintaining, We must base our ruling on the earlier generations, but Beth Hillel hold that we do not.” – 1962 Soncino Babylonian Talmud, Sanhedrin 69b

“Our Rabbis taught: In the case of a male child, a young  one is not regarded as on a par with an old one; but a young  beast is treated as an old one. [23] What is meant by this? — Rab said: Pederasty with a child below nine years of age is not deemed as pederasty with a child above that. Samuel said: Pederasty with a child below three years is not treated as with a child above that.[24] What is the basis of their dispute? — Rab maintains that only he who is able to engage in sexual intercourse, may, as the passive subject of pederasty throw guilt [upon the active offender]; whilst he who is unable to engage in sexual intercourse cannot be a passive subject of pederasty [in that respect].[25] But Samuel maintains: Scripture writes, [And thou shalt not lie with mankind] as with the lyings of a woman.[26]. It has been taught in accordance with Rab: Pederasty at the age of nine years and a day“-  1962  Soncino Babylonian Talmud: Sanhedrin 54b

Footnote 23: The reference is to the passive subject of sodomy. As stated supra

54a, guilt is incurred by the active participant even if the former be a minor, i.e., less than thirteen years old. Now, however, it is stated that within this age a distinction is drawn.

Footnote 24: I.e., Rab makes nine years the minimum; but if one committed sodomy with a child of lesser age, no guilt is incurred. Samuel makes three the minimum.

Footnote 26: Lev. XVI I, 22. Thus the point of comparison is the sexual matureness of woman, which is reached at the age of three.

Sex with heathen boys defiles Jews beginning at age 9, but not before that

FOOTNOTE 17: [Even though he suffered from no issue.]

FOOTNOTE 18: He put the following question to him and had difficulty in eliciting a reply.

Three year old available for marriage through “coition” in Sanhedrin 69a

“R. Jeremiah of Difti said: We also learnt the following: A maiden aged three
years and a day may be acquired in marriage by coition, and if her deceased husband’s brother cohabited with her, she becomes his.”  - 1962 Soncino Babylonian Talmud: Tractate Sanhedrin, 69a

Three year old, marriage through “coition” in Sanhedrin 55b

“A maiden aged three years and a day may be acquired in marriage by coition, and if her deceased husband’s brother cohabits with her, she becomes his.”- 1962  Soncino Babylonian Talmud: Tractate Sanhedrin 55b

“Raba said, We also learned a similar Baraitha:  A girl who is three years of age and one day may be betrothed by cohabitation; if a levir cohabited with her, he has thereby acquired her; [9]  one incurs through her the guilt of intercourse with a married woman” - 1962  Soncino Babylonian Talmud: Tractate Yabamouth 57b

FOOTNOTE 9:  She is deemed to be his legal wife.

Three year old girls are “betrothed by intercourse” in Niddah  44b
“MISHNAH. A GIRL OF THE AGE OF THREE  YEARS AND ONE DAY MAY BE BETROTHED BY INTERCOURSE; IF THE YABAM HAD INTERCOURSE WITH HER, HE ACQUIRES HER THEREBY; THE GUILT OF ADULTERY MAY BE INCURRED  THROUGH HER,  AND SHE  CAUSES UNCLEANNESS TO THE MAN WHO HAD INTERCOURSE WITH HER SO THAT HE IN TURN CONVEYS UNCLEANNESS TO THAT UPON WHICH HE LIES,  AS TO A GARMENT WHICH HAS LAIN UPON [A ZAB].  IF SHE WAS MARRIED TO A PRIEST, SHE MAY EAT TERUMAH. IF ANY OF THE INELIGIBLE PERSONS COHABITED WITH HER HE DISQUALIFIES  HER FROM THE PRIESTHOOD.  IF ANY OF THE FORBIDDEN  DEGREES ENUMERATED  IN THE TORAH COHABITED WITH HER HE IS TO BE EXECUTED  ON HER ACCOUNT, BUT SHE  IS EXEMPT [FROM THE PENALTY]. IF ONE WAS YOUNGER THAN THIS AGE INTERCOURSE WITH HER IS LIKE PUTTING A FINGER IN THE EYE. ” - 1962
Soncino Babylonian Talmud: Tractate Niddah, 44b

- ONLY MINORS MAY USE BIRTH CONTROL

“Three [categories of] women may use an absorbent  in their marital intercourse:  A minor, a pregnant woman and a nursing woman. The minor, because [otherwise] she might become pregnant, and as a result might die… And what is the age of such a minor?  From the age of eleven years and one day until the age of twelve years and one day. One who is under, or over this age  must carry on her marital intercourse in the usual manner. ”  - 1962 Soncino Babylonian Talmud, Yebamoth 12b

“Our Rabbis taught: It is related of Justinia  the daughter of ‘Aseverus son of Antonius that she once appeared before Rabbi ‘Master’, she said to him, ‘at what age may a woman marry?’. ‘At the age of three years and one day’, he told her. ’And at what age is she capable of conception?’ ‘At the age of twelve years and one day’, he replied. ‘I’, she said to him, ‘married at the age of six and bore a child at the age of seven; alas for the three years that I have lost at my father’s house’. But can a woman conceive at the age of six years? Did not R. Bibi recite in the presence of R. Nahman: Three classes of woman may use an absorbent in their marital intercourse:  A minor, and an expectant and a nursing mother. The minor,  because otherwise she might become pregnant and die. An expectant mother, because otherwise she might cause her foetus to degenerate into a sandal.  A nursing mother, because otherwise she might have to wean her child prematurely,  and this would result in his death. And what is the age of such a‘minor’? From the age of eleven years and one day to the age of twelve years and one day. One who is under or over this age  must carry on her marital intercourse in a normal manner” – 1962  Soncino Babylonian Talmud, Niddah 45a

And they found among the inhabitants of Jabesh-gilead four hundred young virgins, that had not known man by lying with him; whence did they know it? R. Kahana replied: They made them sit upon the mouth of a wine-cask. [Through anyone who had] had previous intercourse, the odour penetrated; through a virgin, its odour did not penetrate. They should have been made to pass before the frontplate! - Yebamoth 60b

The law stipulates that the girls were to be passed before a “frontplate”, the gold plate which was worn by the High Priest on his forehead; if the face of the young girl turned pale it was known that she was a virgin and fit for cohabitation; if it did not turn pale it was known that she was not a virgin and therefore unfit for cohabitation… because according to the Talmud “dropsy is a manifestation of lewdness.” - Yebamoth 60b

It was taught: R. Simeon b. Yohai stated: A proselyte who is under the age of three years and one day is permitted to marry a priest, for it is said, But all the women children that have not known man by lying with him, keep alive for yourselves, and Phinehas surely was with them. And the Rabbis?16 — [These were kept alive] as bondmen and bondwomen. If so, a proselyte whose age is three years and one day should also be permitted! - Yebamoth 60b
Posted by Just Another Hindu at 5:01 PM