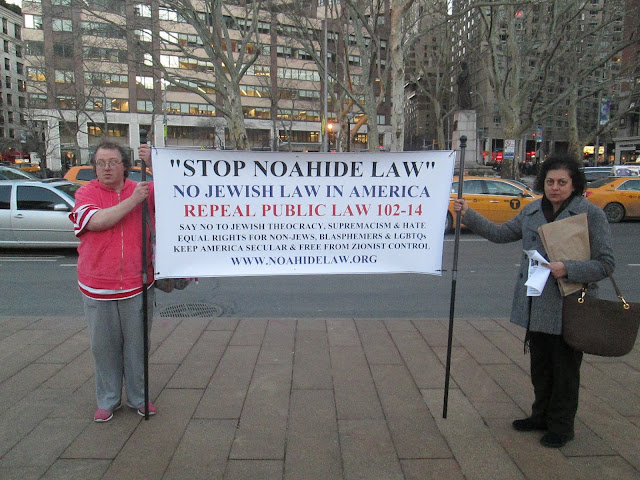 STOP NOAHIDE LAW activists attended the “The New Face of Antisemitism on Campus” event at the 92nd Street Y (Young Hebrew Association) on Wednesday 25 Feb 2015. We were there with signs and fliers to protest the panel appearance of Hillel CEO Eric Fingerhut; Hillel is the largest Jewish student campus organization in the world. Mr. Fingerhut has openly shown his support for the Jewish supremacist Noahide Laws in the USA and has associated himself closely with the Noahide pushing organization Chabad-Lubavitch. The Jewish Noahide Laws are viciously bigoted and demonize non-Jews, even advocating their extermination in the USA under Public Law 102-14. (here)

ERIC FINGERHUT,
CEO OF HILLEL IS AN EVENT PANELIST 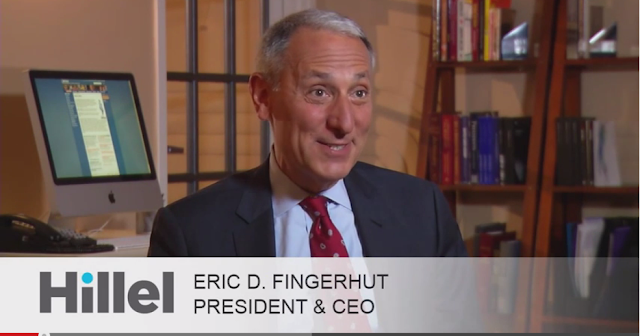 In a 2009 article published in the Jewish Telegraph Agency, Mr. Fingerhut writes about how Rabbi Shea Harlig of Chabad Nevada opened the USA Senate prayer under “the spirit of the Seven Noahide Laws”, honoring the 15th anniversary of the death of Rabbi Schneerson, a Rabbi who stated that non-Jews have satanic souls (here) and the very Rabbi mentioned in US Public Law 102-14 which states that Jewish Noahide Law are the "foundation" upon which American was founded, laws which demand the execution of non-Jews. (here)  In the video below we hear Rabbi Shea Harlig remind the US Sentate they they have set forth the Noahide Laws as a universal code of ethics for all mankind, referring to Public Law 102-14 which also states it is the government's responsibility to transmit these ethics to the next generation via education.

Rabbi Shea Harlig, director of Chabad of Southern Nevada, opened up Senate proceedings on June 25th with an invocation to honor the 15th anniversary of the death of the Lubavitcher Rebbe, Rabbi Menachem Mendel Schneerson. The invitation came from Senate Majority Leader Harry Reid.

After saying that he came in the spirit of the seven Noahide laws, Harlig said, “I beseech you, Almighty G-d, to grant renewed strength and fortitude to all who protect, preserve and help further these ideals so essential to the dignity of the human spirit. Please grant that our beloved Rebbe’s vision of a world of peace and tranquility — free of war, hatred and strife — be realized speedily in our days.

In 1998, Eric Fingerhut published an article in the “Jewish World Review” stating that non-Jews could be considered good people if they follow the Seven Noahide Laws. He also seems to mislead no-Jews into believing that the Noahide Laws are outlined in the Old Testament in Genesis even though Jewish sources explicitly state these laws are not delineated in the Bible but only appear in their entirely within the Babylonian Talmud. (here)

But are a politician’s religious views an issue for discussion? And were Bush’s views unusual? Rabbi Yechiel Eckstein, founder and president of the International Fellowship of Christians and Jews, said that the theology of Evangelical Christians has an “exclusivist” nature to it — believing in the “centrality of Jesus” in order to obtain salvation — which runs counter to many other religions, and even other denominations of Christianity. For example, Eckstein notes that in Judaism, one can be considered a good person without being Jewish by observing the Noahide laws outlined in Genesis.

In 2013 Fingerhut under Hillel auspices met with their apparent sister organization "Chabad on Campus", obviously a Jewish student group run by Chabad which is the tradition mentioned in Public Law 102-14 and perhaps the most aggressive Noahide evangelizing organization on earth.  It would seem obvious that Hillel proper endorses the Noahide Law.

"Chabad on Campus and Hillel Meet"

This past Wednesday, October 16, 2013, representatives for the Chabad on Campus International Foundation (COCIF) had an introductory meeting with Mr. Eric Fingerhut who recently began his position as President of Hillel. Fingerhut previously served as Chancellor of the Ohio Board of Regents, leading their public universities and colleges and served as a US Congressman from the State of Ohio from 1993-94.

The meeting was an opportunity to get to know one another and discuss the vital need and importance in reaching and impacting Jewish students at universities throughout the world.

As explained by Rabbi Gordon, “Jewish youth today face unprecedented challenges and the greater the communication and collaboration between our organizations, the better equipped we will be to continue reaching these students to help them stay committed to their heritage and grow in their connection to their Judaism.”

Posted by Just Another Hindu at 10:27 AM