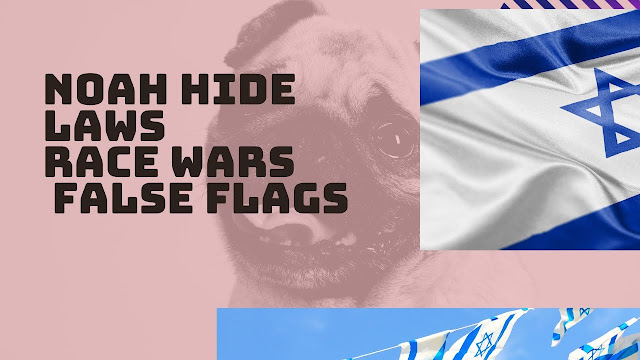 The 7th and final law of the 7 Noahide Laws is to set up "courts of justice" which would try and execute anyone who transgresses the Noahide Laws. In this article, one Ephraim Sherman, a Jewish community leader working with the Black community after the George Floyd incident, he says that the 2020 Black social justice movement is about setting up these very Noahide courts. Is Black Lives Matter aware of this? Why are Noahdist Jews piggybacking off the Black social justice movement, and what in this movement do they see as indicative of setting up any court of law, especially courts that would execute these very same Black people, and has anyone told them that the Talmud says Blacks are cursed (here)?

As we all know, the Sheva Mitzvos B'nei Noach were a particular focus of the Rabbe. He mentioned them over and over, year after year. Most of us can rattle them off when asked, and some of us can even go into depth. If your non-Jewish neighbor asks you about the arayos, you can name the basic relationships that are forbidden. We can all discuss the importance of believing in one God. We must be equally comfortable discussing the mitzvah of establishing "courts of justice." We must also be able to see that this is precisely the mitzvah that the Black community and their allies are working on out in the street of America.

Why I Organized the Jewish Solidarity March With Black People

Ephraim Sherman, a resident of Crown Heights who is a nurse practitioner and healthcare researcher, was one the organizers of the "Talhulacha Social Justice."

The Jewish solidarity with the Black community in Crown Heights was held on Eastern Parkway this Sunday following the murder of George Floyd by a police officer in Minneapolis, Minnesota, and the nation-wide rallies in support of racial equality.

Sherman penned the following article to expand upon the ideas behind the march:

Imagine one of the periods in which the local gentile authorities are not, at that moment, being particularly terrible to the Jews. The local poritz is pretty friendly, there aren’t any priests actively planning our conversion or destruction, the taxes are basically fair, and the economy is pretty good. However, there are still incidents from time to time in which the poritz’s enforcement ocers single out Jews for bad treatment, and every time this happens the local Jewish community erupts in rage.

Now imagine this conversation in the shtetl marketplace between an honest and friendly non-Jewish neighbor and a Jew:

Vlad says, “I see that the Jewish youths are really upset about that incident with the policeman the other day. I agree that it was wrong, but why all this anger? Why such complete rage? You guys have a pretty good life right now don’t you? You’re allowed to work and to earn an honest living. This is a great country!”

Vlad responds, “Now hold on, my family lived in France during those times! We had nothing to do with it! I have lots of Jewish friends and customers, and I love them. I have never said a bad word about Jews. What happened back then is not my fault!”

“Where do you think the field you grow your wheat in came from? Did you ever ask? I’ll tell you. It
belonged to a Jewish family that was killed 80 years ago in a pogrom. The poritz who sold it to you is the grandson of the poritz who was given that land after that family was killed. This poritz is a good poritz, and you are a good neighbor, but it seems like you have no idea about all the things that had to happen, and did happen, specifically to the Jews of this country, to create this nice society for your family to be able to move here from France and find such a beautiful place. This town didn’t magically spring into existence the day before your family came here. There is a history. And it is awfully bloody. And most of the blood is Jewish blood. And if you want to understand why the Jewish youth are so angry even though, generally, things are so nice right now, you need to understand that history.”

I hope you can understand the moshul. America is a beautiful and fantastic country. It is under a medina shel chessed, when viewed as a whole. But America has a history and that history is long and bloody. This time, for once, the blood in American history is mostly not Jewish. The blood that was spilled to build and shape this country largely belonged to the descendants of Africans enslaved and brought to this land against their will.

The American economy of today is the product of the economy 50 and 100 and 200 years ago. America became the superpower it is by growing cotton in the south, turning it into garments in the north, and selling them for huge profits all around the world. Cotton is a messy selling plant and it requires tremendous effort to grow it and make it usable for clothing. The only way to produce such a labor-intensive crop at a profit was to utilize slave labor.

Just as the height of a skyscraper is a product of the bricks laid at its base, so too, it is no exaggeration to say that the economic prosperity experienced by Americans today is a direct result of slavery. We all benefit from the American history of slavery because our economy was established with this venture at its core. Therefore, it is incumbent upon us to acknowledge this history and take active steps to remedy its aftermath. The slaves who gained their freedom in 1865 weren’t released with a handshake and well wishes, let alone forty acres and a mule. They had to spend another hundred years surviving murders, attacks, and repeated theft of their success and the wealth they built. The towns of Greenwood, Oklahoma and Rosewood, Florida are examples of that.

Then, in the years since, they have had to contend with police violence, job discrimination, and “redlining,” a policy of banks and real estate developers to explicitly keep black families out of “nicer” towns and areas, forcing them to remain in cities and neighborhoods like Crown Heights, Bed-Stuy, and Brownsville, long after their former Jewish neighbors went from poor immigrants newly arrived to homeowners on Long Island.

Are you reading this and thinking “…and Jews didn’t have it worse?” or “forget the excuses and just move on” or other thoughts like that? If so, ask yourself how much you are interested in hearing lessons about all the things Jews are doing wrong in the opinion of Igor the non-Jewish Russian American or Jakob the non-Jewish Polish American. Do you care what their opinion is about the best way to better our chinuch? Or to help wayward youth in Crown Heights? I don’t care about Igor and Jakob’s opinions. I wish that their ancestors had done more to stop violence against us in years and centuries past, so that we would not have been forced to flee to America in the first place.

Black Americans are not fleeing from the country that they built with their blood and sweat. They are continuing to build it and improve it. They are the most “American” Americans in the country, having been here longer than almost any other group, and they are asking for support in their righteous efforts. They began building in 1619, when the early English colonists bought the rst slave shipment, and they have been building ever since. They deserve our help. And we owe it to them. This country, their country, saved us when it let us in. Also, it gave the Rebbeim a safe platform from which to launch ourselves to every corner of the globe.

I am a Lubavitcher. I make a new effort each day to live my life as a chayal in the Rebbe’s Army, and to do the things he asks of us, including the hard stuff. The Rebbe’s mivtzoim are not for the faint of heart! The Rebbe didn't send his schluchim out to do the easy work; he sent them out specifically to do the very hard work. Sometimes he sent them out to do the work that seemed impossible. Russian Lubavitchers in North Africa? What kind of insanity was that!

As we all know, the Sheva Mitzvos B'nei Noach were a particular focus of the Rabbe. He mentioned them over and over, year after year. Most of us can rattle them off when asked, and some of us can even go into depth. If your non-Jewish neighbor asks you about the arayos, you can name the basic relationships that are forbidden. We can all discuss the importance of believing in one God. We must be equally comfortable discussing the mitzvah of establishing "courts of justice." We must also be able to see that this is precisely the mitzvah that the Black community and their allies are working on out in the street of America.

We must consider what a Torahapproved justice system looks like in a non-Jewish society. When we write about the need for a court system on the Sheva Mitzvos cards, we are demanding a system of fairness and equality. We are encouraging the person who reads that card to pursue and help maintain a justice system that delivers equal protection to all. Stalin had courts, and so does North Korea, but it is manifestly obvious that those systems cannot be what halacha is talking about. Just like the rest of the Sheva Mitzvos, we must be pursuing this mitzvah as diligently (or more diligently!) than the non-Jewish world. Right now we are failing in that obligation, both as Jews and as Lubavitchers.

My mashpia used to tell me that when you are on mivtzoim all you have to do is “harcheiv picha v’amaleihu.” If you are trying to reach out and help Black people in this moment in history, but don’t know how to start… just start! Find a peaceful protest and go. If you aren’t sure where to nd one, make your own, the same way you would if it was a tefillin route. The next time you see a Black person on the subway or climbing the stairs or walking on the street, help them. Do more than the bare minimum, do it with a smile, and then (this is key) engage them in conversation if it seems like they want to talk. The next time someone posts an awful comment on WhatsApp or social media, speak up and point out that it is wrong.

Racism is more than just the n-word and the KKK. It is also comments like, “the problem with the Blacks is…” The response to that, by the way, can be “maybe the better question to ask is what’s the problem with White people, considering all of the things that White people did, and still do, to Black people.” I understand that it is hard to call out Uncle Mendy on the family WhatsApp group. It is still the right thing to do. The path to fighting racism begins with White people, and us, and others who are not Black, asking what we can do to x injustices. We must be proactive, and we must be brave enough to confront the hard and complicated legacies of this country’s past. Without doing that, we are not fullling the mandate to create a just system.

The Rebbe’s mivtzoim are not for the faint of heart. There are no excuses.