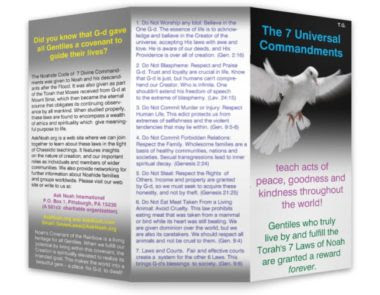 Jews often times defend any criticism of their religion by announcing that they don't or rarely ever seek to convert non-Jews to their religion. While this may be true, Jews are working hard to evangelize Noahidism to the masses and they have zealot Jewish missionaries.

Welcome To The Neighborhood: How A Young Couple Is Building A Chabad Congregation In Springfield

It’s High Holiday season and Rabbi Mendy Turen, 27, and his wife Sara Turen, 23, have a full house for the Jewish New Year of Rosh Hashanah. The two-day observance calls for hours of prayer and festive meals including fish heads symbolic of being the head and not the tail of the New Year, round challah loaves symbolizing a crown, apples and honey, honey cake and sweet wine to signify a sweet New Year. Even at a young age, Rabbi Mendy is more than prepared to host large gatherings of people who attend Chabad to get a taste of the Hasidim or what some call “the soul of Judaism.”

The couple have been running the Chabad House in Springfield, Illinois for three years and are believed to be the only traditional Orthodox Jews in town. Despite that, on holidays such as Passover and Hanukkah, their house is packed with people who want the experience of a more traditional Jewish setting. Jews from Israel, London, and The Yeshiva of Postville, Iowa gather at Rabbi Mendy’s table. Even congregants from B’rith Sholom, the reform synagogue, and Temple Israel, the conservative synagogue, make their way to the Chabad House. And people stay for hours debating Israeli politics over scotch, listening to the stories of Jews who grew up in Springfield, and learning more about Judaism. Rabbi Mendy describes it as “a very special Chabad House.”

“I’ll say we’re very lucky. From the get-go at the first event we did, which was the summer barbecue, we had 60 people,” Rabbi Mendy recalls. “We have a good core of about 85 people and a general list of about 300 people.”

Those are good numbers considering Springfield’s Jewish population is estimated to be at 1,000 and Chabad Houses in larger cities struggle with attendance. It was five years ago, when Rabbi Mendy began scoping out Springfield as a location for a Chabad House after discovering there was none in the capital city. He visited four or five times a year for two years, recruiting members the old-fashioned way…. the phonebook.

“You come to a town get a hotel for the night, rent a car and start looking through the phone book for Jewish sounding names. It worked tremendously and we didn’t think it would,” Rabbi Mendy said.  “We started with ‘A’ then we got to Cohen and some other Jewish sounding names. We were here for a week and we met over 20 Jews in that week which was a lot.”

During his time building a base for his Chabad House, Rabbi Mendy met Sara Scheiner, his future partner in crime. Sara’s family runs the Chabad Lubavitch of Boulder, Colorado - so it was a perfect match. The two were introduced through a shidduch, or Jewish matchmaker, and when Sara heard about his plans to be a shaliach, a Hasidic Jew who teaches the world about the Hasidic movement, she was happy to join him.

The couple are a “walking billboard” for Hasidic Jews says Rabbi Mendy who often draws an onslaught of questions. Hasidic Jews are identified by their form of dress. The men wear black hats, black over coats, don beards, and wear payot or sidelocks. The women dress modestly. If married they wear wigs also known as sheitels or cover their hair with a scarf. All Hasidic women wear knee length skirts and blouses that cover their elbows, many even wearing leggings underneath their skirts. But most of the questions revolve around their finances.

“People want to know how we survive financially because we don’t charge,” Sara said.

The Springfield Chabad, like all Chabad emissaries, thrive off donations and a yearly campaign to benefit the Chabad of Springfield. However, Rabbi Mendy uses the invasive questions as an opportunity to bring a greater perspective to their lives as an orthodox couple in a small midwestern town.

“I try to explain there are a number of level of difficulties we go through and financial is just one of them. How do we survive socially? We moved here from our communities and our families when we’re literally the only Orthodox or Shabbat observant Jews in the entire city. How do you survive on that level? Or how do you survive kosher when there are no kosher supermarkets here. Education, God willing, soon our children will be needing education. We only do Jewish education. We don’t do public school.”

Even more difficult was when Sara went into labor on Shabbat, not once but twice. Jews who live according to Halakha, or Jewish law, do not use electricity on Shabbat, sundown on Friday to sundown on Saturday. So, the couple enlisted their friend and neighbor Ron Delay to help them when they’re in a jam. Delay met the Turens when they moved into the neighborhood. He cranks up the air conditioning for the Turens on hot days and took Sara to the hospital when she was in labor.  He says he loves Rabbi Mendy and the Turens are the most exciting neighbors he’s ever had.

“Sara doesn’t have any hair. I didn’t know she wore a wig until she went into labor,” Delay said. “And then her water broke in my car. The second time she said ‘I think we better put a towel down.’”

He laughs as he talks about the Turens, recalling how the group that lives at the end of the cul-de-sac reacted to the presence of a Chabad rabbi in the neighborhood. The Turen’s house is always full of people and that means more cars on the street, but Delay said, “they just make more room.” And when curiosity overwhelmed even the most rational minds resulting in rumors, Delay took it upon himself to get to know more about the Turens.

“Someone came up to me and said, ‘You know they have a pool in the garage,’” Delay commented. “So, I looked up who owned the house, then looked up their last name, and tried to figure what kind of name it was.”

Delay, who works for the State of Illinois investigating food stamp fraud, used his skills to find out about who the people were that moved in the house across the street. It wasn’t long before he figured out the Turens are Orthodox Jews and it was not a pool in the garage, but a mikvah, or a ritual bath used by women once a month and on special occasions. As Delay learned more, he became close to the couple.

“I didn’t know rabbis can drink,” he said. “Mendy invites me over for a beer, but I don’t want to be a burden.”

The Turens are “not exclusive” and Sara said they have developed relationships with non-Jews, many of whom have become close friends. They often come to Chabad for Shabbat and holidays to learn more about Jewish customs. The couple sets aside one day a week to teach non- Jews about the Noachide laws, religious laws for Gentiles. Rabbi Mendy knows not everyone will welcome him with open arms. However, they have been lucky and when the shooting occurred at the Chabad Center in Poway California, Rabbi Mendy says the Springfield community embraced them with “an outpouring of support.”  The Turens, in collaboration with The Jewish Federation of Springfield, held a ceremony honoring the victims of the shooting that drew politicians such as Governor J.B. Pritzker, the Mayor of Springfield Jim Langfelder, and many people from outside the Jewish community.

In fact, it was non-Jews who informed the Turens of the shooting that occurred on April 27, 2019, the Shabbat during Passover, but they had to wait until sundown to get all the details. Rabbi Mendy was even more shocked to learn it was a family he knows very well.

“I was in school with the rabbi’s son. I stayed at the rabbi’s brother’s house in Brooklyn when I went there to visit. I knew who it was. I know many Chabad members, but there are 6,000 Chabad Emissaries around the world. I don’t know every one of them and here it was one that I actually know,” Rabbi Mendy said. “The initial feeling of what happened was horrific. When you hear about a shooting, which in our society happens, it’s always terrible and tragic, but here it hit close to home.”

Since then, the Turens have implemented a higher level of security while continuing to focus on their core mission to help every Jew and, the non-Jewish world as well. Rabbi Mendy doesn’t shy away from the Springfield community and as one Chabad guests said, “he’s everywhere,” donning his black hat and black overcoat, ready to tell people about Judaism and how one act of kindness can change the course of the world.

“At first it was a shocker they’re not used to seeing people with black hats or yarmulkes. I’m sure there are people who aren’t the best of friends to Jews in town and when they see an openly Hasidic Jew they aren’t excited, but we haven’t had any of those encounters,” Rabbi Mendy said. “We encounter people who have heard about Hasidic Jews through movies or tv and they get excited when they see us.”
Posted by Just Another Hindu at 6:39 AM