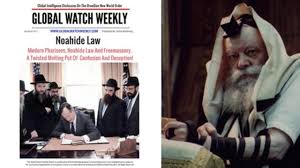 The common belief is that Jews are a special group who were designated by god to be the priests of the world and to use their influence to usher in Noahidism.

Every year (for three decades now), on the weekend of Shabbos Mevarchim Kislev, Chabad shluchim around the globe gather in New York for their annual convention. (The weekend was originally chosen because Rosh Chodesh Kislev 1977 is when the Rebbe returned home after suffering a heart attack during hakofos on Shmini Atzeres evening.)
This Shabbos we read Parashas Chayei Sarah, which includes the first shlichus in the Torah – Avraham sending his servant Eliezer to select a wife for his son Yitzchak. Two parshahs ago, Hashem commanded Avraham to travel to an undisclosed land. At that moment began the special mission entrusted to Avraham and his descendants, the Jewish people, to refine and elevate this material world, to transform it into a worthy “dwelling place” for Hashem’s presence.
Every Jewish soul sent into this world is privileged to be a shliach of Hashem, charged with a unique part of this exalted mission to create a Divine dwelling place. This mission is accomplished by fulfilling Hashem’s mitzvos, which are also called shluchim of Hashem, as the Midrash (Tanchuma, Vayigash 6) says, “Honor the mitzvos, for they are My shluchim, and one’s shliach is considered like oneself.” The mitzvos are G-d’s representatives,” creating a bond (mitzvah comes from the root tzavsa – to combine) between Him and those fulfilling them.
Avraham received his shlichus when G-d commanded him to leave his home at the age of 75. His descendants received their shlichus when Hashem gave us the Torah at Mount Sinai, telling us (Shemos 19:6), “And you will be for Me a kingdom of kohanim” – meaning (as our Sages explain), a nation of Hashem’s representatives. By observing His mitzvos, we bring Divine holiness into the world, eventually influencing even non-Jews to rise higher through the observance of the seven Noachide commandments (see Rambam’s Mishneh Torah, Hilchos Melachim 8:10).
Throughout our history, great leaders have given their disciples and others special tasks to spiritually elevate the world. The sixth Lubavitcher Rebbe, Rabbi Yosef Yitzchok Schneersohn (1880-1950), introduced a new perspective by designating every Jew as a shliach to help raise other Jews to a highly spiritual level by encouraging them to intensify their Jewish observance.
It started when, under the anti-religious Bolshevik regime, he sent his followers on danger-filled missions to strengthen Yiddishkeit. They founded and funded underground chedarim and yeshivos, built secret mikvaos, and organized Torah study groups in shuls, among other activities. The Rebbe encouraged all conscientious Jews to follow their example. Later, when forced to leave the USSR, he sent his followers on similar missions in Eastern European lands and further afield. Finally, on his arrival here in the United States in 1940, he started sending shluchim, not only to far-flung locations in North America, but all over the world, even Australia and Africa – wherever there were Jews.
These activities continued and grew dramatically under the leadership of his son-in-law and successor, the Rebbe of our generation. They have expanded to the point where official Chabad shluchim around the world now exceed 5,000, and that number continues to grow. Many Chabad chassidim who are not “official” Chabad shluchim are involved in similar activities as educators, rabbis of communities, and other positions through which they reach multitudes of Jews.
Not only Chabadniks but many other Jews, too, have been inspired by their example and realize their role as shluchim of Hashem to spread Torah and Yiddishkeit as widely as possible. Gradually, all these efforts are influencing many previously uncommitted Jews to add a mitzvah or several to their lives, thereby fulfilling, at least partially, the purpose for which their soul descended into this world. As these efforts continue and increase, they bring the revelation of Moshiach ever closer – the ultimate purpose of every shluchim conference.
We wish our fellow shluchim boundless success in their exalted mission as they serve as models to all Jews for realizing their G-d-given mission.
(Based on teachings of the Lubavitcher Rebbe)
Posted by Just Another Hindu at 7:26 AM