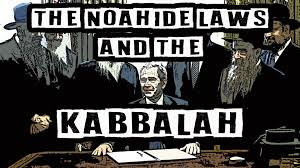 
It is hard to believe that it would be an effective strategy but Jews, in attempts to convert non-Jews to Noahidism, are teaching them that in comparison to Jews their souls are incomplete and animalistic, see and example (here). Again in this article from Chabad we see the same assertion, this time that the intellectual spheres of human capacity per the Kabalah are only associated with Jews so that they may spread the Noahide Laws to the non-Jews. What kind of person would allow their being to be degraded like this and accept such blatant Jewish supremacy?

"In Kabbala and Chassidut, the Seven Commandments are equiva­lent to the seven lower sefirot. The ten sefirot, through which G‑d made the world and man, are divided into three "intellectual" attributes: Wisdom, Understanding and Knowledge (chochma, bina, and daat), and seven "emotional" ones: Kindness, Might, Beauty, Eternity, Glory, Foundation and Sovereignty (chesed, gevura, tiferet, netzach, hod, yesod and malchut). The three intellectual attributes are associated with the Jewish people who provide the legal and spiritual interpretations of the Seven Laws to the descendants of Noah. Each law parallels one of the seven "emotional" sefirot."

G‑d "created the world that it might be settled". (Isaiah 45:18) This implies a level of civilized conduct, which can be achieved only when non-Jews also observe their mitzvot. Indeed, the perfection of the world that leads to the Messianic Era requires the spreading of the seven commandments that G‑d through the Torah provided for all the nations of the world.


These are the Seven Noahide Laws, as enumerated in the Babylonian Talmud, Sanhedrin 56a:

1. carry out justice - An imperative to pursue and enforce social justice, and a prohibition of any miscarriage of justice.

2. no blasphemy - Prohibits a curse directed at the Supreme Being.

3. no idolatry - Prohibits the worship of any human or any created thing. Also prohibited is the making of idols and involvement with the occult. This necessitates an understanding of the One G‑d of Israel and His nature.

5. no homicide - Prohibits murder and suicide. Causing injury is also forbidden.
no theft - Prohibits the wrongful taking of another's goods.

6. don't eat a limb of a living creature - Promotes the kind treatment of animal life. It also encourages an appreciation for all kinds of life and respect for nature as G‑d's creation.

The authority of these laws derives from the verse, "And the Lord G‑d commanded it upon the man…" (Gen. 2:16). They were given again to the nations of the world through the teachings of Moses at Marah (Ex. 15:25-16), but are known by the name of Noah because they first became fully applicable in his time, when meat-eating became permitted.

Jews who ask what their attitude towards their non-Jewish friends should be can be shown a complete formulation for non-Jewish integrity and well-being, which can be applied wherever they live. These principles may be taught freely to all non-Jews who encounter them.

In Kabbala and Chassidut, the Seven Commandments are equiva­lent to the seven lower sefirot. The ten sefirot, through which G‑d made the world and man, are divided into three "intellectual" attributes: Wisdom, Understanding and Knowledge (chochma, bina, and daat), and seven "emotional" ones: Kindness, Might, Beauty, Eternity, Glory, Foundation and Sovereignty (chesed, gevura, tiferet, netzach, hod, yesod and malchut). The three intellectual attributes are associated with the Jewish people who provide the legal and spiritual interpretations of the Seven Laws to the descendants of Noah. Each law parallels one of the seven "emotional" sefirot.

Sexual misconduct is the perversion of love, and is related to chesed. Sexual transgression disrupts G‑d's love for us and harms people in their love-capacity, while permitted sexual relations are cherished in Heaven, and facilitate divine influence throughout creation.

Murder is the perversion of strength and power, and corresponds to gevura.

Theft is the destruction of harmony in human relationships, and corresponds to tiferet, the harmonious blend of kindness and might which enables social balance. In a world where questions of business morality are at the top of the agenda, this commandment fosters ethical conduct in an area where it is sorely needed.

Idolatry and Blasphemy correspond respectively to netzach and hod, which are often paired together as the two supports of faith. Idolatry is a violation of divine rulership, and blasphemy of divine love. Since G‑d's rulership and His love are inseparable, each in turn facilitating the other, so too these two commandments support and enhance each other. G‑d alone is to be worshipped, directly and with­out any conjoining or intermediary, and He alone desires and hears prayer out of His love for all mankind.

Eating a limb from a living animal corresponds to the sefira of yesod, associated with the reproductive drive. The link be­tween eating and sexuality is well-known. The eating of living meat fosters the purely rapacious aspect of both eating and sexual relations. It adds to the desire for purely exploitative sexual relations which resemble eating, since such food contains the actual "heat of life" which arouses selfish passions. Sexual rapaciousness and cruelty of all kinds are rectified by abstaining from living meat as defined by the Torah. This in turn inspires gentle and respectful practices, such as those directed towards maintaining the environment.

A functioning judicial system corresponds to malchut, the lowest sefira, which rules in supremacy but is selflessly devoted to public service. This is the responsibility of good government. Our sages state, "War comes to the world through the delay of justice, the perversion of justice, and the teaching of Torah not in accordance with Jewish Law". (Avot 5:8) When both Jews and non-Jews can learn Torah without distortion of its halachic (Jewish legal) meaning, true peace becomes possible. This includes recognition of the principle that Jews can be judged only according to Torah law, no matter where in the world, and that non-Jews in Eretz Yisrael are considered according to the Seven Noahide Laws by the Jews there, with no sovereign jurisdiction of their own.

A complete guide to the 7 basic laws can be found in the Encyclopedia Talmudit, under "Ben Noach". A philosophical understanding is available in 'The Seven Laws of Noah', by Aaron Lichtenstein. See also, the U.S. Congressional Declaration: H. J. Res. 104, Public Law 102-14, March 20, 1991; and the talk of the Lubavitcher Rebbe on Shabbat Beshalach 5743/1983.

Yermeyahu Bindman moved to Israel from his native England in 1979. He is the author of Lord George Gordon (the 18th century English convert), "Rabbi Moshe Chaim Luzatto - His Life and Works," and of 'The Seven Colors of the Rainbow", a book-length explanation of the concepts in the above article.

Posted by Just Another Hindu at 6:50 AM