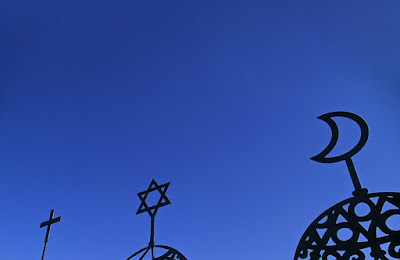 In this article, one Aurthur Goldberg states that Christians and Muslims and taught that their religion is based upon the Noahide Laws! Has anyone informed Christians and Muslims of this, both of whom are considered idolaters under Noahide Law (here & here). This is not the same time Arthur Goldberg of JIFGA has said these types of things. He has stated that Christianity and Islam teach that Noahide Law in "imperative" (here) and he has infiltrated both LifeNews (here) and LifeSiteNews (here) with his message. In addition, Goldberg used to run a homosexual conversion program that was court shut for abuse and which re-opened as a Noahide education center (here).

"Individuals within the Abrahamic faiths (Judaism, Christianity, and Islam) are taught that all of humanity should follow the Noahide Code, a set of imperatives given by G-d as a binding set of laws for the Children of Noah and which serves as the foundational premise of their individual faiths."

Sight and sound: A US appeals court upholds use of technology to inform choice in abortion
by Arthur Goldberg
May 1, 2019

The Sixth Circuit Court of Appeals, in EMW Women’s Surgical Ctr. vs. Beshear et. al, recently decided that a statute is constitutional under Supreme Court precedents if it “requires the disclosure of truthful, non-misleading, and relevant information about an abortion.” This important case, celebrated by pro-life advocates, upheld a Kentucky law requiring doctors to conduct an ultrasound, and thereafter offer to show and to explain to the patients the images taken, as well permitting the patient to hear the fetal heartbeat of the unborn life in utero, all at least 24 hours prior to having an abortion performed.
In its opening paragraph, the court unequivocally set forth the issues in the case:

“Under Roe v. Wade [citation omitted], a woman has the right to choose to have an abortion. To inform that choice, the Commonwealth of Kentucky directs a doctor, before performing an abortion, to auscultate (or make audible) the fetal heartbeat, perform an ultrasound, and display and describe the ultrasound images to the patient.”

“The freedom of parents to crush prenatal life, which now seems to be in vogue, will eventually lead to utter destruction, because it is only a small leap of logic from foeticide to infanticide, to getting rid of infants who may not fulfill our ideals of mental and physical health, or eventually, ethnic and genetic respectability.”

Even though he correctly predicted that secular society would move toward infanticide, a process to which several liberal politicians now give approval, it is unlikely that Rabbi Lamm could have conceived how far so-called progressive politicians and states would move in that direction.
Individuals within the Abrahamic faiths (Judaism, Christianity, and Islam) are taught that all of humanity should follow the Noahide Code, a set of imperatives given by G-d as a binding set of laws for the Children of Noah and which serves as the foundational premise of their individual faiths. There is simply no question that abortion comes under the Noahide prohibition against murder and the subsequent incorporation of such view within the three Abrahamic faiths.
By incorporating scientific advances in prenatal care, such as ultrasound technology, together with the knowledge that abortion is not only morally wrong (murder) but also corrosive of society, pro-life advocates continue to challenge and chip away at the consensus prevailing since Roe v. Wade. And, over time, because of well-reasoned decisions such as EMW v. Beshear, pro-life advocates will ultimately successfully change the dynamics of the debate over abortion.
Arthur Goldberg is Co-Director of the American based Jewish Institute for Global Awareness, former Co-Director of JONAH, Inc. JIFGA sponsors www.fundingmorality.com, a crowd-funding site for those committed to Biblical values. He has authored Light in the Closet: Torah, Homosexuality, and the Power to Change. You can contact him at: arthur.goldberg@aol.com

Arthur Goldberg is the former Co-Director of the American based Jewish Institute for Global Awareness,and JONAH, Inc. JIFGA sponsored www.fundingmorality.com, a crowd-funding site for those committed to... More by Arthur Goldberg
Posted by Just Another Hindu at 9:50 AM