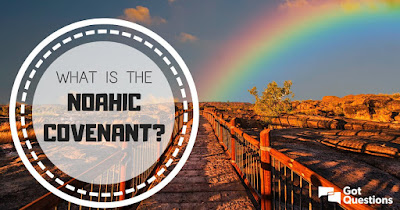 The Action Institute attempts to influence society with Christian values, but it would seem they have fallen under the Noahide deception. According to Chief Editor Joe Carter, the Noahide Laws are a revelation from god, and that sin blinds the eyes of the Christians toward them. He even encourages the deception that the apostle Paul promoted the Noahide Laws (here). None of this makes any sense since the Talmud and Maimonides are pretty much clear, Christianity is idolatry (here).

If we desire to develop a positive habit, we need to perform an action repeatedly, over time, until it becomes an automatic reflex. The same process occurs when we fall into sin. When we sin, we reject God’s authority. If we repeat our sin, over time, the rejection of God’s authority becomes an automatic reflex.
Even unbelievers, who innately know God’s general revelation, such as his invisible attributes, the creation ordinances, and the Noahide Laws, begin to deny such knowledge because of sin. Paul says that by our unrighteousness we suppress the truth. They think they are wise, but their sin makes them foolish. Eventually, God gives them over to their debased minds. (Rom. 1:24)
FULL ARTICLE

What Christians (Should) Mean When We Talk About Conscience

A new Pew Research survey finds that the majority of American Catholics  (73 percent) say they rely “a great deal” on their own conscience when facing difficult moral problems. Conscience was turned to more often than the three other sources — Catholic Church’s teachings (21 percent), the Bible (15 percent) or the pope (11 percent) — combined.
While it never really went away, conscience is making a comeback among Christians.
Over the past few years, the term conscience has been increasingly referenced in debates occurring both in our churches (e.g., appeals to conscience on moral issues) and the public square (e.g., defending the right of conscience). This is a welcome resurgence, since formation and promotion of Christian conscience is particular important to our primary mission at Acton of articulating a “vision of society that is both free and virtuous, the end of which is human flourishing.
We hear a lot about conscience, but what exactly does it mean? The general concept of conscience can be found in almost every human culture, but it has a unique and distinctive meaning for Christians. The Greek term for conscience (suneidesis) occurs more than two dozen times in the Bible, and serves an important concept, particularly in the Pauline epistles. If we examine the way Scripture talks about conscience we uncover five general themes:

1. CONSCIENCE IS AN INTERNAL RATIONAL CAPACITY THAT BEARS WITNESS TO OUR VALUE SYSTEM.

A few decades ago, a common trope in comedies and cartoons was the shoulder angel/devil. A person’s inner turmoil was personified by having an angel, representing conscience, on the right shoulder and a devil, representing temptation, on the left shoulder. This type of folklore imagery gave people the false impression that the conscience was like an inner listening room in which a person could hear the voice of God (a “good conscience”) or the devil (a “bad conscience).
A more Biblical view is to consider the shoulder angel/devil as representing witnesses to our inner value system. Our conscience is a part of our God-given internal faculties, a critical inner awareness that bears witness to the norms and values we recognize when determining right or wrong.
Conscience does not serve as a judge or a legislator; that is a modern take on the concept. Instead, in the Biblical sense, conscience serves as a witness to what we already know. (Rom. 2:15, 9:1) Conscience may induce an inner dialogue to tell us what we already know, but more often it merely makes its presence known through our emotions. When we conform to the values of our conscience we feel a sense of pleasure or relief. But when we violate the values of our conscience, it induces anguish or guilt. Pastor-theologian John MacArthur describes conscience as “a built-in warning system that signals us when something we have done is wrong. The conscience is to our souls what pain sensors are to our bodies: it inflicts distress, in the form of guilt, whenever we violate what our hearts tell us is right.”

2. CONSCIENCE IS A TRUSTWORTHY GUIDE ONLY WHEN IT IS INFORMED AND RULED BY GOD.

A few days before he became a candidate for the U.S. Senate in 2004, Barack Obama sat down with religion reporter Cathleen Falsani to talk about his faith. When Falsani asked, “What is sin?,” Obama replied, “Being out of alignment with my values.” While there is a lot wrong, theologically speaking, with that answer, it does contain a kernel of truth. What Obama was describing as “being out of alignment with my values” is what we could call “violating our conscience.” To violate one’s conscience is indeed a sin (as we’ll discuss in a moment). But what makes something a sin is not merely being out of alignment with our values but in choosing our own will over the will of God. Our conscience is therefore only trustworthy when it does not lead us to choose our will over God’s will. As theologian R.C. Sproul explains,

[W]e have to remember that acting according to conscience may sometimes be sin as well. If the conscience is misinformed, then we seek the reasons for this misinformation. Is it misinformed because the person has been negligent in studying the Word of God?

A prime example of the way our conscience may lead both Christians and non-Christians to sin is when we violate, or advocate for the violation, of creation ordinances. Among the creation ordinances are the clear injunctions to preserve the sanctity of the marriage bond between one man and one woman, the necessity and propriety of godly labor, and the keeping of the Sabbath (Gen. 2:1-3, 15, 18-24). Our conscience bears witness to the reality and truth of these ordinances, and we are guilty of sin when we deny or break them

3. CONSCIENCE IS TO BE SUBORDINATED TO, AND INFORMED BY, THE REVEALED WORD OF GOD.

Conscience cannot be our final ethical authority because it is, unlike God’s revealed Word, changeable and fallible. Too often, though, Christians reverse the order and attempt to use their conscience in order to judge God and his Word. Many Christians claim, for example, “I could not worship a God who would say [a clear statement from the Bible]” or “I couldn’t believe in a God who would do [something the Bible claims God clearly told someone to do].”
In making such statements they may be appealing to their conscience. But in such cases, their consciences are being informed by Satan, not by God. A person’s conscience may cause them to question a particular interpretations of Scripture. But our conscience can never legitimately judge a holy God or his holy Word.
When we find ourselves thinking “Did God really say?” when Scripture clearly says he did say just that, then we know it is the serpent and not the Savior speaking. (Gen. 3:1)

4. TO WILLFULLY ACT AGAINST CONSCIENCE IS ALWAYS A SIN.

“The conscience of the Christian is obligated and bound only by what the Bible either commands or forbids,” says Sam Storms, “or by what may be legitimately deduced from an explicit biblical principle.” Our conscience should always be informed by what God has said. But what if we are mistaken about what the Bible commands or forbids? What if, for example, I believe that the Bible forbids any form of dancing — and yet I go square dancing ever Saturday night. Is that a sin?
In that case, it would be a sin to square dance since I would be acting in a way in which I think is wrong. Imagine if I were at a neighbor’s house and see a wallet lying on the floor. Thinking it’s my neighbor’s wallet, I quickly take the cash from it. Later I realize that it wasn’t my neighbor’s wallet at all — it was my wallet, which had fallen out of my pocket. Would I still be guilty of theft, even though it was my own money I took? Yes, I would be since I had intended to do wrong. I had intended to steal — intended to violate God’s commands—even though I was mistaken about the object of my theft. As Paul says, “For whatever does not proceed from faith is sin” (Rom. 14:23).” R.C. Sproul expands on that verse by saying:

If we do something that we think is sin, even if we are misinformed, we are guilty of sin. We are guilty of doing something we believe to be wrong. We act against our consciences. That is a very important principle. [Martin] Luther was correct in saying, “It is neither right nor safe to act against conscience.

Sproul adds that the “conscience can excuse when it ought to accusing, and it also can accuse when it should be excusing.” While we should challenge misperceptions of what the Bible commands and forbids, we should be careful about encouraging people who are not yet mature in the faith or are underdeveloped in knowledge of Scripture from acting in ways that will violate their unformed or immature conscience.

5. CONSCIENCE CAN BE SUPPRESSED BY SIN.

If we desire to develop a positive habit, we need to perform an action repeatedly, over time, until it becomes an automatic reflex. The same process occurs when we fall into sin. When we sin, we reject God’s authority. If we repeat our sin, over time, the rejection of God’s authority becomes an automatic reflex.
Even unbelievers, who innately know God’s general revelation, such as his invisible attributes, the creation ordinances, and the Noahide Laws, begin to deny such knowledge because of sin. Paul says that by our unrighteousness we suppress the truth. They think they are wise, but their sin makes them foolish. Eventually, God gives them over to their debased minds. (Rom. 1:24)
Believers are also in danger of falling into this destructive pattern. Sometimes our sin leads us to doubt the very reality of God. When we deny God’s authority we begin to doubt his existence so that we can salve our conscience about his judgment. (Not all doubt is caused by sin, but sin almost always leads to doubts.) Sin can cause our conscience to become “seared” and “corrupted” and wholly unreliable. (1 Tim. 4:2; Titus 1:15)
This is why to protect our conscience and keep it in working order we must preach the gospel to ourselves daily. We must call on the Holy Spirit to convict us of sin, lead us to righteousness, and remind us of the judgment that we are spared by our union with Christ Jesus. Only then can our conscience serve its intended purpose of helping us conform to the values of our Creator.


Joe Carter is a Senior Editor at the Acton Institute. Joe also serves as an editor at the The Gospel Coalition, a communications specialist for the Ethics and Religious Liberty Commission of the Southern Baptist Convention, and as an adjunct professor of journalism at Patrick Henry College. He is the editor of the NIV Lifehacks Bible and co-author of How to Argue like Jesus: Learning Persuasion from History's Greatest Communicator (Crossway).
Posted by Just Another Hindu at 9:19 AM