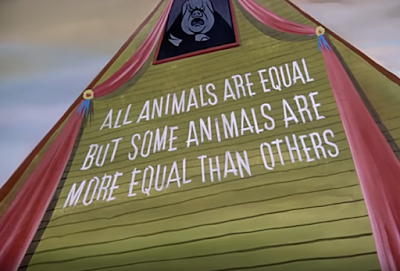 The sixth Noahide Law is "do not eat the flesh cut from a living animal". To some this maybe a strange law, however it is true that in some parts of the far East and other nations people do still eat animals alive or cut/cook them while they are alive. While few people may disagree with this Noahide Law, we must also keep in mind it comes with its own strange stipulations, such as the fact that we may not eat lab cloned meat because the cell to grow the meat was taken from a living animal (here). George Orwell's Animal Farm is a fable set to show how Stalinism spread in Russia and a warning against Communism. At first the animals are abused by a drunkard human farmer who represents to old way of doing things, usually under a monarchy. However, the animals stage a revolution and set up seven laws to guide themselves, these seven laws are:

The motto "all animals are equal" resembles the promises of Communism. However, the farm once again becomes a tyranny (representing a Communist tyranny) when the pigs take over and change the law to state "All animals are equal, but some animals are more equal than others". For some odd reason, the writer of this article in The Policy Times seems to think the original seven animal laws represent the seven Noahide laws which he says are a guiding factor for any political system. But what the writer forgets to mention is that the clause "some animals are more equal than others" is already written into the Noahide Laws. Jews have more rights and dignities than non-Jews under Noahide Law. Jews need two witnesses to their crime and are entitled to a warning, however non-Jews only need one witness to their crime to be executed, and they are not provided the intercept of an official warning against their crime (here). Jews may steal larger amount of money than non-Jews (here), they may also steal from non-Jews (here & here) and Jews may murder non-Jews with impunity (here). Additionally, while a non-Jew is executed for ever committing adultery, a Jew may have sex with the wife of a non-Jew and escape penalty (here). Jews are currently teaching non-Jews that their souls are animalistic and less complete than the souls of Jews (here). Are we already living in late animal farm where the pigs have taken over?

Animal Farm is a masterpiece, words of which still hold relevance even today, after after more than 70 years of its publication especially in the current political scenario. The Seven Commandments inscribed at the wall of the Manor Farm which have been said to be derived from the Seven Laws Of Noah seems to be a guiding factor of any political system.


All Animals are Equal but Some Are More Equal than Others

Remembering the book ‘Animal Farm’ by George Orwell as he himself described it as a satirical tale against Stalin and stalinism. The allegorical novella has very articulately described the Russian dictatorship leading to the Russian Revolution of 1917 and Stalin era. Even after 7 decades of its publication, it holds the potential of bringing a change in our political system.
By Nitish Raj -June 22, 2017
Who could forget the character of Old Major, responsible not only for bringing a rebellious upsurge in the farm but also in the literary world? The characters who have been a part of just fairy tales got transformed when the whole world was witnessing a major change. How could we forget the speech which embarked the importance of producers rather than consumers being responsible for a new change. The time itself was taking a new turn as the literature was shifting from countryside romance to the realism of the common masses. At the time when writing lengthy novels were in fashion this novella proved that creativity has nothing to do with the quantity of words. The book was rejected by a number of both British and American Publishing Houses. Even though this Anglo-Indian born in the lands of Bihar didn’t lose hope as his work was one day going to be featured in the Times 100 best english novels along with various critical acclaims and praises. The masterpiece not only got commercial success but also made us aware of the satire genre in a very responsible as he himself quotes “to fuse political purpose and artistic purpose into one whole”. Such a literary genius from Motihari could be none other than Eric Arthur Blair popularly known by his pen name George Orwell. And the novella he wrote was “Animal Farm”.
The Plain Truth
Animal Farm is a masterpiece, words of which still hold relevance even today, after after more than 70 years of its publication especially in the current political scenario. The Seven Commandments inscribed at the wall of the Manor Farm which have been said to be derived from the Seven Laws Of Noah seems to be a guiding factor of any political system. Our constitutions have been framed by leaders but have been very recklessly manipulated by the greedy politicians. How hard  we try, we seems to be the animals of the Manor Farm who are still striving hard to achieve Animalism as we are not considered worthy of. The way in which our politicians, elected by us, deteriorate the rights of common men is quite heart-rending. Laws are framed to safeguard our interests but at what cost have remain undefined. Thanks to our judiciary – Temples of Justice which promises us justice through fair trial, often ends up pampering the poor and the riches are left recklessly free. That’s why perhaps, Orwell’s words, “All animals are equal but some animals are more equal than others” seem absolutely true.
The Promising Perpetrator
I am unsure about how much of the words of the Old Major has been well-conceived but the prodigal promises are in abundance. Sometimes I wonder that why don’t we change the term “Political System” to “Promises System” whenever I have a look over the current scenario. Aren’t we in the midst of something like the Napoleon of the Manor Farm who promises the Windmill to his masses? Today it is a common sight to spectacle a ton of promises to come to power. Wait! They are for our own well-being and development as the earlier one have depleted the nation badly and need an immediate transformation.
All the commemoration of new projects and plans are for the benefit of the common masses. Either we are forced to be in the labyrinth of the wrong-doings of the past people or the Battle of the Windmill as someone is trying to cast an eye on our sovereignty. Indeed! It is a common sense. We are the responsible citizens of a country and we should be patriotic. How can we tolerate that someone is becoming a threat to our dear nation? The nation which is facing threat on its sovereignty and independence on a daily basis. How can we leave our country in utter distress when our dear leaders are working day and night to ensure peace in the country by diplomatic talks and various peace treaties even though it had hardly brought any peace? There can’t be a tinge of doubt as they are totally dedicated in shaping our destiny. The destiny which almost changes every five years without disturbing their own development.
The time is ripe to focus our attention on the teachings of this literary masterpiece. Animal Farm have brought attention to the various flaws of our political system. The Policy Times takes this opportunity to pay a real homage to the creator of “Animal Farm”.

Posted by Just Another Hindu at 8:03 AM