Rabbi says that non-Jewish heritage truths are only there and true because they are based in Noahide Law, non-Jews should learn their heritage through Torah and the Jews, only non-Jews who follow the Noahide Laws go to heaven 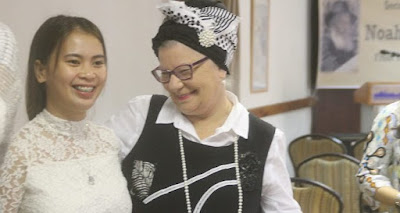 The public laws which recognize the Noahide Laws in the United States (here) state that the Noahide Laws are the "foundation" upon which the American nation was founded. While the USA was not founded on Noahide Law, it seem some Rabbis believe that the "truths" of other paths are only true because they are based in Noahide Law. One Rabbi says that non-Jews should learn about their heritage through the lense of Torah and as taught by Jews. He also says only non-Jews who follow the Noahide law go to heaven.

Should I Convert to Judaism?
Is Judaism For Everybody?
By Tzvi Freeman

Question:
I came across your site and wow—I really want to become Jewish. My mother was a fairly devout Italian Catholic and my father an Anglican skeptic who never went to church. I was always so confused. But now your site has really turned me on to Judaism, a real coming home for me. What's my next step?

Response:
Your next step is to become a better person. Develop greater faith in your soul, in your destiny, and in your Maker. Do more good, reach out to more people. Learn more wisdom, apply whatever you learn, and make life worth living.

But you don't need to become Jewish to do any of that. Plenty of wonderful people doing beautiful things in the world are not Jewish, and G‑d is nonetheless pleased with them. And if you're worried about going to heaven, Jewish belief is that all good people have a share in the World to Come, as long as they connect their lives to the oneness of G‑d and keep the Seven Laws of Noah.

You see,
there's Judaism and there's Jewishness, and the two are not one and the same.

Judaism is…
Judaism is the Creator's wisdom for every person on the planet and beyond. We call it the Torah, meaning "the teaching," and it's a divine message to all human beings containing the principles that much of humanity has already accepted as absolute truths.

The idea that human life is beyond value is a teaching originating from Torah, as is the related concept that all human beings are created equal. So too, the right of every individual to literacy and education was brought to the world through Torah. And world peace as a value and goal was preached exclusively by the Torah and its prophets thousands of years before it became popular in the rest of the world.

And of course, the idea that there is a single, incorporeal Being who creates and sustains all of reality, and is concerned over all that occurs with each individual, thereby giving each person, creature, event and object meaning, purpose and destiny—this is a core teaching upon which everything else rests, and the central teaching of the Torah.

This teaching was not only preserved, but unfolded, explained, illuminated and applied in so many different ways by Jewish sages since it was given, over 3300 years ago. They've applied it to serious matters of medical ethics, business ethics, politics, personal enlightenment—every facet of human life. Today it is all readily available for all humanity to partake of and learn from, as a beacon of light and an inspiration to all.

Jewishness is…
That's Judaism. Then there is Jewishness.

To be Jewish means to belong to an ancient tribe, either by birth or by adoption (a.k.a. conversion). It's a strange and unique tribe, because it is the only one to have survived into modernity while retaining most of the characteristics of a Bronze Age tribe.

Anthropologist Jared Diamond describes in his book, "Guns, Germs and Steel," how a New Guinea tribesman, when visiting a nearby village of the same tribe, will immediately start the conversation with an investigation of, "So, who are you related to? Do you know so-and-so?" to establish tribal relations.

Well, that's exactly what Jewish people do today when they meet one another all over the world. Because, whether living in Manhattan or Joburg, Tel Aviv or Vladivostok, we are still all one tribe.

And for good reason: To preserve the teachings of an ageless, G‑d-given Torah for the world, the Jewish People themselves need to be ageless, remaining outside of time, as it were, even while traveling within it.

Tribes have rituals. So do Jews. Many Jewish tribal rituals were divinely ordained by the Torah as it was given to us in Sinai. Others are based upon those rituals, embellishing or enhancing them. But they are tribal rituals nonetheless, in that they are specific to the Jewish tribe.

Males of the tribe wear particular items of clothing, such as tzitzit and kippot. Women keep a certain mode of modest dress and married women cover their hair. Men also wrap leather boxes containing parchment scrolls on the heads and arms every morning, while robed in woolen sheets with more of those tzitzit tassels. In our services, we chant ancient Hebrew and read from an ancient scroll.

We have holidays that commemorate our tribal memories and establish our identity as a whole. Certain foods are taboo and other food is supervised and declared fit-for-the-tribe.

Nope, you can't get much more ancient-tribal than any of that. It seems G‑d wanted us to remain tribal and distinct forever.

And You Can Take One Without the Other
The point is, none of that ritual stuff was ever meant as a universal teaching, except perhaps in a more generalized way. Modest dress—yes, a good idea for all. Why should the human being be reduced to a body icon? A chat with your Maker every morning? How can a human being do without it? And injecting some spirituality into your food consumption—what a great way to transcend the mundane.

But as to the particular rituals in their Jewish form, as meaningful as they are to us, there's simply no meaning in someone outside the tribe taking them on. (If you don't believe me, take a look in the source-text, where G‑d tells Moses, "Speak to the Children of Israel and tell them to...")

Now, what I'm saying is not very PC nowadays. We live in a world of hyper-mobility. Not just because we own our own cars and reserve our own tickets online to go anywhere, anytime—but because we imagine our very identities to be just as mobile as our powerbook. Pick me up and take me anywhere. Today I'm a capitalist entrepreneur, tomorrow an Inuit activist, and the next day a Californian bohemian. And we can mix and match—today, you can be Italian, Nigerian, Chinese and Bostonian all in the same meal.

So who is this Freeman character to tell me which tribe I belong to and which not?

Two friends of mine joined the Peace Corps back in the sixties and were posted in Southeast Asia. Together, they visited a little-known guru in the jungle to whom they announced, "We want to become Buddhists."

"Well, what are you now?" he asked them.

"Where did you come from? What were your parents?"

Now it's my turn to return the favor and tell the Southeast Asians, the Italians, the Nigerians, the Inuits and all the rest of humanity this little piece:

I believe that what G‑d wants from each person is that s/he examine the heritage of his ancestors, discover the truths hidden there and live in accordance with them, knowing that this is what his Creator wants from her/him. The truths are there because all of human society was originally founded upon the laws given to Adam and to Noah, along with those laws that all the children of Noah accepted upon themselves. These truths are found by examining one's heritage through the light of Torah. The Jewish Tribe is the bearer of that light. But you don't need to become Jewish to partake of it. Light shines for all who have eyes.

Enjoy our site. Help spread the light.
Posted by Just Another Hindu at 7:58 AM