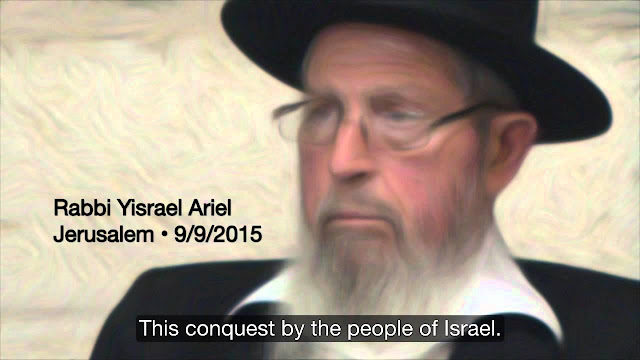 Rabbi Yisrael Ariel is the head of both the Temple Institute and the unofficial Sanhedrin in Israel. The Sanhedrin is not only seeking to become the official highest authority in Jewish law, but they are also looking to international recognition. They want to replace the UN with their own international Noahide court (here). In this video with provided transcript, Rabbi Ariel speaks of the need to use war to spread the Noahide Laws globally and to destroy other faiths. Now his speech is set in the future, when the Jewish Messiah arrives... but the Temple Institute subscribes to the ideology that the Jewish people can collectively be the Messiah and there is no need for any divine man to come forward (here). Ariel speaks of "if" you have the ability to force global non-Jews to follow the Noahide Laws, do it, it is a mandatory command. He is eager for the Messiah... the Messiah being the Jews themselves. All it takes is Jewish and Noahide will and his blood thirst could be satiated.

by Rabbi Yisrael Ariel
Head of The Sanhedrin [unofficial]


and the Temple Institute

With all due respect to the rabbis and this holy audience, we have to raise a point here: we are talking about the Sanhedrin. We are talking about the purity of the court. As we said we are dealing with the Jewish people. What power does the Sanhedrin have with respect to the other nations of the world? Let's say they come here and decide to put on trial sentence to some punishment or other the Pope [Francis], or [US President] Obama, somewhere it is written what must be done about it. We read it earlier, although not all of it. This is the name of Maimonides. Maimonides says: This is what the Torah commanded us, what Moses commanded us, from the mouth of The Might [god]. When Maimonides says this, it means that it is a commandment from the Torah to take actions. Where is it written? We recently read [Deuteronomy 20:10]: "When though drawest nigh unto a city to fight against it, then proclaim peace unto it". What is meant by 'peace'? Maimonides says that they must agree to follow the 7 Noahide Laws. So why do you call for war? Stay home! Why go to war? Because it is commanded from the Torah to take action! Just as there is a commandment to conquer the Land of Israel, there is a commandment to fight "Sanctioned Wars"! There are commandments. It is written. In a "Sanctioned War", if you see an attractive woman, then there is another commandment: Can you marry the woman, and if so, how? etc. These are commandments from the Torah. Who makes the decision to embark on "Sanctioned War"? King David asks The Sanhedrin! For example: "May I embark on a war with Northern Syria and Aleppo?" Maimonides says that King David went to The Sanhedrin and asked them if he could go out and conquer. Everything that David did was sanctioned by the High Court, that's what Maimonides says. Then he went out to conquer Northern Syria and Aleppo. This conquest by the people of Israel you decidde that they deserve all kinds of punishments, and so on, you summon them to court. And you decide whether to go for broke over it. That's not how it works. the law works differently [for them]. In Israel, you take the person and put him on trial. You take a convert to Judaism who did not follow the religious laws, you judge him and punish him. But non-Jews who do not follow the 7 Noahide Laws, such as "Though Shalt Not Kill" and "Though Shalt Not Steal", etc. you proclaim peace to them! Meaning, you ask them "Do you follow the 7 Noahide Laws? If so, we will allow you to live"."If not, you kill all their males, by sword. You only leave the women. How do you leave them? They must all agree to follow the 7 Laws. And that is how to impose the 7 Laws on that city. Someone just said: "We don't have the might to fight." But who decides if we have might or not? God! He gives you the might to raise and army. Therefor, he is the one who commanded [us] to go from city to city, conquer them all, and to impose the 7 Laws [throught] the world. That is the job of the Messiah, among others. He does not come as the Messiah, he comes to carry out these commandments! You conquer a city, and then they follow the 7 Laws. We will conquer Iraq, Turkey... we will get to Iran too. We will impose the 7 Noahide Laws on all of these places. But installing does not mean with courts! Rather, it means with war! But not just kill. Just the opposite. You say "I call upon you in peace." If they raise the flag [of surrender], and say, "From now on there is no more Christianity, no more Islam", the mosques and the Christian spires and their crosses come down, from now on we foll the 7 Noahide Laws." This is a task of the Messiah, to bring the entire world to the 7 Noahide Laws, for real. This is not a matter for court hearings, it is something to carry out! Plain and simple. Therefore, Maimonide says that if you see a person in the street who does not follow the 7 Laws, -- this is what he says -- if we have the might, you have to kill him. If you catch [US President] Obama on the street, and you know that he does not follow the 7 Laws, etc. (You are commanded to kill him.) Sorry? (You are commanded to kill him, and the sooner the better.) This is why Maimonides. If someone threatens you, to ruin you, to kill you, you kill him first. But there are numerous levels to the snake, and you have to go level by level. We cannot invent religious laws that do not exist. Maybe these words are not so pleasant to hear. But this is why we have to Torah of Moses. We are also forbidden to lie. We have to tell the whole Torah, the truth of it. May we all merit to follow the commandments and to see the Messiah follow these commandments.
Posted by Just Another Hindu at 7:00 PM