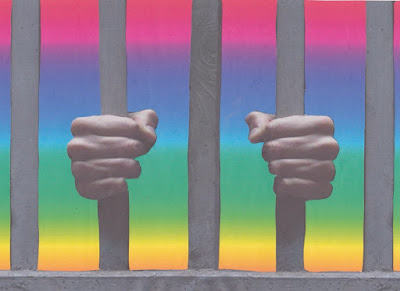 Chabad-Lubavitch is the Jewish sect that is mentioned in almost all 7 of the federal laws recognizing the Noahide Laws in the United State (here & here) in recognition of the their service to the cause. Chabad-Lubavitch has of late found it expedient to infiltrate the prison systems, setting up a prison journal which preaches the Noahide Laws.

"Of course there aren’t many Jewish converts compared to the success of missionary efforts by evangelical churches and the Jehovah’s Witnesses. But there are enough African-American and Latino ‘converts’ trying to live as Jews in prison that Reaching Out, the Lubavitcher run prison newsletter, has a special guidebook for them on Noachide Law, the moral code demanded of righteous gentiles."

As of 2014, 1,500 of New York’s 56,000 prisoners are Jews that keep kosher. If you really believe that all 1500 were avoiding pork before they got behind the wall, you’ve got another thing coming. I am a real Jew, albeit a bad Soviet one, and know something about the community of Jews in prison.

Prison is much more receptive to skinheads and the Nation of Islam, than it is to Jews; and the cops I encountered weren’t too fond of us either. I had to decide very quickly, upon arrival, whether I would practice or not. But my Bar Mitzvah rabbi survived the camps, camps he could have probably avoided because of his Aryan looks. How could I forget his dictate to always be proud to be a Jew, even in circumstances when it might not seem to ones advantage? Perhaps the prisons of New York state were not quite what he meant, but in the end practicing my faith and never denying it only sharpened my will and sense of self. And the community inside, which clings to its rituals and traditions, is strong and cohesive enough that it draws curious new converts. Only in America do prisoners convert to Judaism. Poor old Yakov Smirnov would have said, ‘Vat a country!’

I encountered other Jews in each of the twelve prisons I visited, but usually only one or two. The only joint that had enough Jews for a minyan, the quorum of ten Jewish men needed to fulfill certain religious obligations, was Greenhaven Correctional Facility, a maximum-security big house with a unique hot kosher program.

Because of its kosher kitchen, Greenhaven housed Israelis and Lubavitchers and Bobovers and Sephardim and Falasha and Satmars and just bad High Holiday Jews, like myself, from the Lower East Side and Brooklyn. All of us were packed together into a fifty-man dining hall. When I was first introduced to this scene, I was horribly curious about what each of them did to get there, and that is a question that is difficult to ask inside. With time, however, I knew all the stories.

Around half of my fellow Jews inside had no criminal backgrounds, but awful tempers. This meant that they killed their wives. You get 25 to Life for that. One especially frantic Hasid had wrenched his wife to death while fixing his station wagon in front of all nine of his children. His 25 years was up, but the kids kept coming to the parole boards to argue against his release. Meanwhile Chabad, the ultra-religious Jewish organization, sent emissaries to argue the opposite.

The Israelis were drug dealers, all casualties of the popularity of ecstasy in the 1990’s. They smuggled it in from Europe in sculpted toads and diamond cases and even in the beards of Lubavitchers who couldn’t resist the money. A movie was made about these guys eventually, ‘Holy Rollers’, but in real life they were rather hapless, insecure Sabras who dreamed of blondes and Miami. One of them, a nice fellow name Yaakov, knew my taste for gefilte fish and used to sneak me entire logs of the stuff that Catskill hotels had donated for our celebrations.

Jewish holidays are taken seriously in prison. Of course it is a result of lawsuits and not the respectful nature of the Department of Corrections, but we had Seders and a Sukkah tent and Chanukah candles. Each facility has a Rabbi, though some of the smaller ones have traveling Rabbis that rotate from joint to joint. I clerked for many of them, including the one female Rabbi working for the state. They are limited in what they can do, but financially the Jewish congregations are well taken care of by outside organizations.

Our holidays consisted of services and feasts. The Lubavitchers all knew the Hebrew prayers, siddurs were available, and services were long and serious. We fasted for Yom Kippur, read from the Megillah for Purim, and said bruchas over every meal. Behind bars Judaism is practiced intensely, probably more so than the version you’d find in a lot of modern synagogues on the outside.

Some of the length and intensity of the services was a ploy to keep out the religious tourists. Some cons are promiscuous about their religious affiliation, identifying with whichever G-d promised the most snacks and ceremonies based on that week’s holiday schedule. Rabbis can tell when someone changes their religion to Jewish for the perks. They can’t stop them, but they would write ‘self-declared’ in Yiddish on the paperwork for the next Rabbi to see.

Orthodox Conversion in prison is impossible, because there is no troika of Rabbis to oversee it and no ritual mikvah bath to anoint the convert. Even the gentiles who sincerely try to practice the faith are considered ‘self declared’ in their paperwork. And yet a surprising amount of guys do turn to Judaism. The rapper Shyne was born Jewish but became very religious after a shooting involving P-Diddy landed him a ten year sentence. He clerked for the same Rabbi I did, only in the neighboring prison. Of course there aren’t many Jewish converts compared to the success of missionary efforts by evangelical churches and the Jehovah’s Witnesses. But there are enough African-American and Latino ‘converts’ trying to live as Jews in prison that Reaching Out, the Lubavitcher run prison newsletter, has a special guidebook for them on Noachide Law, the moral code demanded of righteous gentiles.

Our Kiddush prayers were done with gefilte fish and grape juice instead of wine. The New York Board of Rabbis would send in cases of macaroons for the congregation at every Passover. The Jews were the only faith group that got such extensive pampering, but that is because there are so few real Jews in prison so it’s easier to provide for them. And according to Torah law, every Jewish soul is sacred. They may have been chosen to serve some time, but they are still Chosen.

I lucked into Greenhaven’s hot kosher kitchen but other inmates spent years manipulating transfers to get there. Everywhere else across the state convicts registered for kosher food get the same monotonous diet; dinner is a rough piece of cold cut for five days, then two days of sardines. Lunch is soy tuna in a cup. It may be different from the standard menu, but after the financial crisis of a few years ago, it is no longer better.

Anti-semitism exists in prison as if it had time travelled from about forty years ago. ‘Jewing someone down’ is perfectly acceptable lingo, as is ‘Jewbag’ and ‘Kike’. For the Caucasian minority in prison, white supremacy is still the sub-culture of choice. Typically, they read a bit of Mein Kampf and mimeographed newsletters about the Zog Machine (ZOG: Zionist Occupied Government. Did Nixon know?). But in truth, most of these upstate guys from trailer parks and dying factory towns have only seen Jews on television. They are ignorant and angry but it’s an abstract hatred. Upon introductions, I made sure to mention my own circumcision early on in the conversation so that nobody would embarrass themselves by making the wrong kind of crack. That way I was only talked about behind my back. But I was never beaten or oppressed for being a Jew. By the other prisoners, that is.

The cops despise Jews. For one thing, the facility rabbis are usually pretty powerful and can actually bring discipline down when the guards harass someone who refuses to sign something on the Sabbath or eat non-kosher or walk four steps without their yarmulke or open up their tefillin scroll cases for a search. Religious Jews stand out because of their distinctive appearance and limited activities during Shabbas, and it’s never a good thing to stick out in such environments.

The cops see all of this as special treatment, and as a result there are many nice Jewish doctors and lawyers (who happened to have killed their wives long ago) in solitary. One wouldn’t think that the Jews of prison would be a disciplinary problem, but more kosher meals are sent to the box than to the regular population. Go figure.

Attempting to keep kosher in prison is very difficult. I always had the utmost respect for the guys that managed, because keeping meat and milk apart in a tiny cell, one that you might perhaps be sharing with someone who studies the Latin King Lessons rather than the Talmud, is incredibly difficult. Plus the temptations. You’re already losing years of your life in prison. If the facility provides cheeseburger to celebrate the Fourth of July only the most pious are going to turn it down and crack open their canned tuna.

Swastikas are scrawled and tattooed all over prison, but for the most part the Jews are safer with the prisoners than with the cops. With a little effort, it is possible to keep kosher and respect the Sabbath. Jewish life does exist inside and it probably improves some people. But any religion is shaped by the environment where it’s practiced and Judaism in prison is no exception.

I asked a question once, from the top lay-member of our congregation in Greenhaven. He’s still there, a really fat Orthodox guy we’ll call “Ben” who killed his pregnant wife and got fifty years for it. He also had the best collection of porn in the jail. So I was talking to Ben about G-d’s laws versus man’s, and asked which were worse to break. He reminded me that G-d sanctioned killing many times in the Tanakh, and that laws against violence are not G-d’s laws but man’s. However, G-d is very clear about the Sabbath being a day of rest. So it’s worse to turn the lights on than kill your wife, as you may have a good reason for killing your wife but none at all for the light switch.

All of us convicts were wishing for the day that we would get out but life inside will surprise you and sometimes prison can actually bring people together. I led a seder once for a table of ten African-American gents, who had come for the ‘jew-crackers’ and stayed for the entire service. And on another occasion, in a bit of ‘interfaith dialogue,’ I explained to a self-professed neo-Nazi that being Jewish only strengthened my character, and demanding kosher food from the cops taught me bravery. He said it was ok, since it was well known that Hitler was half-Jewish anyway. Being a Jew in the joint was an adventure, and all in all, I can only thank Hashem for his help during my decade in prison.

Posted by Just Another Hindu at 7:45 AM