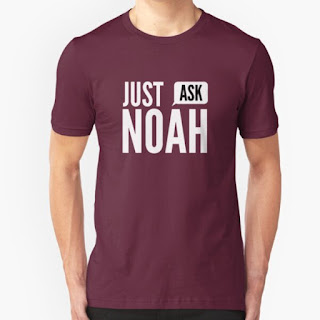 Ask Noah is a forefront Jewish organization in spreading the Noahide Laws. The book they use, "The Divine Code"by Rabbi Moshe Weiner, was approved of by the Chief Rabbinate of Israel and contains passages detailing the need for death for those who do not follow the Noahide Laws (here). However, it would seem Jews have no issue partnering with their Noahide converts in running these organizations as one Noahide, Chaim Reisner, seems to have dedicated his life to spreading Noahidism and aided in the building of  Ask Noah. Jews will often tell you they don't have enough numbers to implement the Noahide Laws, but they forget to mention their growing minions of converted Noahides who are just as hungry for a Noahide world as the Jews are.

A wood craftsman by trade and an educator in the field of the Seven Noahide Laws, Chaim Reisner passed away on April 6 after contracting COVID-19.
Reisner grew up in New Jersey and settled in Morristown in 1967, which a few years later became home to the Rabbinical College of America.
He was drawn to observance at the college after being invited to speak to the students there about a federally sponsored drug-awareness program called “Youth Alternatives,” which he was working on with the then-future mayor of the town. He became a pioneering member of the fledgling Chabad-Lubavitch community that grew around the college. For years, he and his wife, Leah, were stalwarts of the growing community before moving to Pittsburgh in 1994.
In his professional life, Reisner was a craftsman; he owned and operated a furniture repair and restoration business for years in Morristown, then opening a chair restoration shop in Pittsburgh’s heavily Jewish Squirrel Hill neighborhood. He actually built two tables for the Rebbe—Rabbi Menachem M. Schneerson, of righteous memory—which the Rebbe used when he would distribute dollars to thousands each Sunday for several years, as well as distributing Chassidic books on special occasions.
Come the holiday of Sukkot, Reisner and his sons would be polishing the interior wooden panels of the Rebbe’s sukkah to a glossy finish. He was called upon on several occasions to repair the Rebbe’s furniture in both his office and home.
An initiative that was especially close to Reisner’s heart was promulgating the Seven Laws of Noah—the G‑d-given moral values that are the bedrock of a just society—incumbent on all humankind. After the Rebbe encouraged his followers to spread the universal ethical teachings of the Torah to society at large, Reisner took up the task and was responsible for implementing and overseeing the research, development and publication of several books on the subject, collaborating with the foremost experts in the field.
With the birth of the Internet, he partnered with Dr. Michoel Schulman, together founding www.asknoah.org, a site geared towards educating the public and fielding questions on the Seven Noahide Laws.
In his spare time, Reisner was an accomplished chef who used his talents in demonstrating the ease of keeping kosher. He authored several recipe books, including Happy Kosher. He would also host live cooking demonstrations where he would illustrate how to transform popular non-kosher dishes into kosher ones.
“His business was fixing chairs,” Rabbi Yisroel Rosenfeld, executive director of Yeshiva Schools and of Chabad of Western Pennsylvania, told Chabad.org, “but he spent all day talking to people. They ended up walking out a different person, the way he affected them, their look on the world about caring and sharing with one another.”
Reisner was predeceased by his wife, Leah, in November 2019.
He is survived by their children: Jill Tzadik, Ephraim Reisner, Josh Reisner, Shira Sultan, Ari Reisner and Dovy Reisner, as well as many grandchildren and great-grandchildren.
He is also survived by his sister, Ellen Reisner.
Readers are invited to express their condolences or memories of the departed in the Reader Comments box that follows this article.
To provide additional information for this article, or to submit the names and information about other Jewish victims of the coronavirus, please use this form.
Posted by Just Another Hindu at 10:13 AM