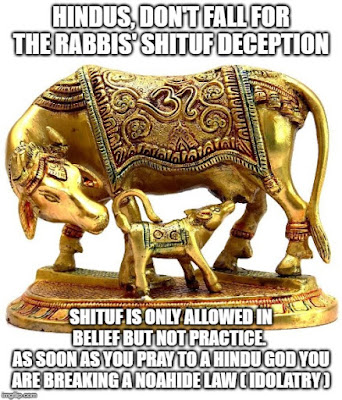 I have already written on this blog about the Shituf deception (here). Shituf is a form of worship which Jewish law does not count as polytheism, but does not quite fit the definition of pure monotheism in Jewish terms. The deception comes in when Jews or Noahides might try to tell you that your form of worship, whether it is Christian, Hindu, Buddhist or Pagan, that these practices are not banned under Noahide Law because Jews have determined they are Shituf, an intermediate, and thus are acceptable for non-Jews (but not Jews). However, as we already know, this is a matter of hot debate. I contacted the director of Ask Noah, who officially use "The Divine Code" by Moshe Weiner in their mission... a book that was approved of by the Chief Rabbis of Israel and which calls for the execution of non-Jews who do not follow the Noahide Laws (here). Ask Noah said that shituf, a belief in plural powers outside the definition of Jewish monotheism, is only permissible in thought but not in action or speech, as soon as you say Jesus or Vishnu or Zeus is lord, you are practicing idolatry and are liable for the death penalty. However, the shakiness of consensus on Noahide law can make the playing field dangerous for non-Jews as they may be confused by differing opinions. In this article we are asked the question that when Harry Truman in 1945 acknowledge the Emperor of Japan's decent from the sun goddess, did he practice idolatry? According to whom I think is Yair Hoffman who wrote the article, this was actually a form of permissible shituf. Unlike Ask Noah, Hoffman says that a non-Jew is permitted to oath to a non-Jewish god out loud, but is only prohibited in believing this... the very opposite of what Ask Noah said! Now, there are also some stipulations here according to Hoffman. First, a non-Jewish god can only be oathed to out loud (according to Hoffman), if the pronouncer is meaning that the god called upon is actually a lower form of deity than the god of Israel and that the god of Israel is central and foremost in the pantheon. He makes it clear that the Christian trinity is not acceptable however under this premise because Christians view Jesus as co-equal with the god of Israel, and Christianity is considered idolatry in Talmud and by Maimonides (here). So wait... what if one Rabbi says we can proclaim another god out loud, but another Rabbi says we can't... who decides? Are we allowed to practice polytheism if the god of Israel is the top or our pantheon, or is this forbidden? And are we allowed to believe this in our own heads or not? However, much of this may be very irrelevant as it is Rabbi Schneerson who is said to be the leader and spiritual guide of world Jewry in American federal law 101-267  (here) and is lauded in other laws and proclamations for his preeminence in the Noahide movement. Rabbi Schneerson made it clear he believes Christianity is idolatry and not Shituf [permissible or impermissible] (here)... so it might not be all that hard to guess what is opinion is on calling out to pagan deities, we will have to see but it is a sure bet this would be forbidden under a Schneerson-Chabad Noahide world. Led astray by a Rabbi? Off with your head!

Rav Aharon Kotler ZATZAL, Truman, And Hirohito
The author can be reached at yairhoffman2@gmail.com 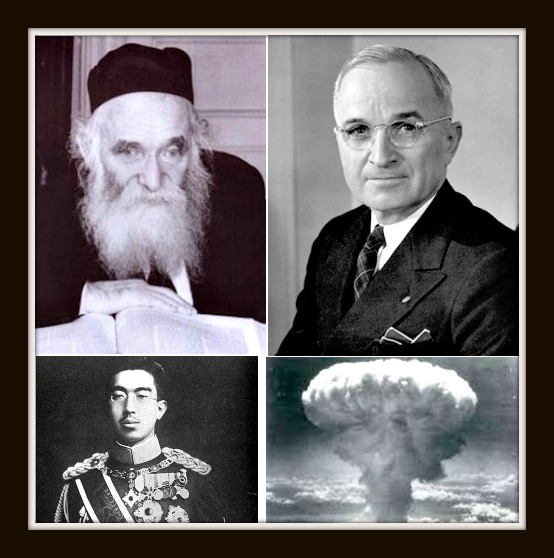 It could be a study in contrasts between how two central figures in World War II dealt with Emperor Hirohito of Japan.
Rav Aharon Kotler zatzal and l’havdil President Harry S Truman both had their encounters with Hirohito – revered as a Divine figure among the Japanese prior to Japan’s capitulation.
RAV AHARON ZT”L
Rav Aharon’s encounter was the first. After having received their Soviet-issued exit visas on February 7th, 1941, Rav Aharon, his wife and daughter Sarah booked passage aboard the MS Kamakura which was leaving Kamakura, Japan. The Kotler family arrived early and stayed in Kamakura until the MS Kamakura Maru was to depart to San Francisco. While Rav Kotler was on the street, Emperor Hirohito’s arrival was announced. The police ensured that everyone present was to lay prostrate on the ground. Rav Aharon Kotler, zt”l, however, refused to listen to the police instruction. He was severely beaten, t inches of his life.
Visiting Rav Aharon as he was recovering, was Reb Moshe Cohn, one of his students from the Yeshiva in Kletz. Rav Aharon asked him, “How is it that you are in such fine physical shape? You were there too when Hirohito arrived!”
“Yes, Rebbe, but I listened to the instructions,” responded Reb Moshe Cohn.
“What? How could you do such a thing? Hirohito is revered in Japan as a god. That is Avodah Zarah and bowing is abizraihu d’avodah zarah! It is yehareg v’al yaavor!”
Rav Aharon recovered. He, his wife, and daughter Sara arrived in San Francisco on Thursday, April 10th, 1941. It was two days before Pesach. Eight months later, the United States and Japan were at war after the Japanese attacked Pearl Harbor on December 7th, 1941.
TRUMAN
In 1945, after the bombing of Hiroshimo and Nagasaki, President Truman wished to strengthen the hand of the Japanese emperor in dealing with the Japanese military. In a speech broadcasted around the world he publically referred to Emperor Hirohito as a “direct descendant of the sun goddess Amaterasu.”
For political purposes, Truman conceded the existence of a sun goddess –contradicting thousands of years of the teachings of Christianity.
Gentiles are enjoined by the seven Noahide laws to believe in G-d. President Truman certainly would not have asked halachic questions as to what his obligations might be vis a vis the Seven laws of Noah. But the question does arise as to whether what Truman did was halachically permitted.
The Shulchan Aruch (OC 156) explains that a Jew should not have a partnership with an idol-worshipper as perhaps a situation will arise where the idol-worshipper will be forced to take an oath. He would thus be in violation of the command not to have allowed the name of idols to be heard. The Ramah, however, cites a dissenting view (the Ran end of first chapter of tractate AZ). He writes that in modern times, when the gentile mentions idol-worship, he is really intending for the creator of Heaven and Earth it is just that he is looking at it as if it was shituf – i.e. both G-d and (l’havdil) the Avodah Zarah entity who created things. He writes further, and this is the key idea, that “gentiles are not commanded against ‘shituf’ – a belief in both G-d and (l’havdil) the Avodah Zarah entity.”
The reading of this Ramah is the subject of great controversy. Does he really mean that a gentile is not commanded against a belief in G-d plus Avodah Zarah? A look at the RaN itself shows that his view is that there is no special prohibition of a gentile swearing to Avodah Zarah, but not that there is no prohibition in believing that Avodah Zarah can co-exist with G-d.


TWO DISSENTING VIEWS
One might, therefore, be tempted then to read the Ramah as only referring to the oath. Yet the Ramah elsewhere (Darchei Moshe YD 151) clearly refers to more than just permission to cause them to swear. Rabbi Akiva Eiger in a letter to his son Rav Shlomo (new responsa, end) writes that one may not rely on the lenient view of this Ramah.
Yet we find that the Chsam Sopher, Rabbi Akiva Eiger’s own son-in-law, writes in his Toras Moshe (parshas VaYishlach) that, in fact, gentiles are not commanded on Shituf. There is also a fascinating Rashi on Tehillim 6:11 that finds fault with the gentile nations for making idol-worship central and the Holy One Blessed be He – minor. The takeaway from this Rashi is that it is the lack of centrality rather than actual “sharing” that is what is faulty. The Maharatz Chajes (Horios 5) also writes clearly that a gentile is not commanded in “shituf.”
There is also a Pirkei D’Rebbi Elazar (beginning of Chapter 34) that states that if a gentile says that there is a second god – he will not have life in the world-to come. How then does the view that a gentile is not commanded in Shituf understand this latter source? It would be difficult to say that he is not forbidden in this belief, but if he does believe in it, he will have no spiritual future.
This author would like to suggest an entirely new understanding of what Shituf means. According to the view that permits Shituf, it does not mean polytheism as it is understood in a dictionary. Rather, it means that the Creator created secondary powers after Creation – powers that were not co-eternal in origin. These secondary gods took charge of various other forces. This is the philosophy that the Ramah and others permit for gentiles, and it would fit nicely with the For Jews, however, such a belief would be strictly forbidden.
How would this new definition fit with those who believe in the divinity of the founder of Christianity? Well their theology is actually two-fold. They believe not only in his divinity but that he is co-eternal. Non-trinitarian Christians, however, would be a different matter altogether.
Getting back to President Truman, however. It could very well be that his politically motivated mention of the Avodah Zarah was just a matter of Maris Ayin or a Rabbinically forbidden issue. The Minchas Chinuch points out that the sages never made their enactments for gentiles. The Gemorah in Avodah Zarah (12a), however, clearly states that there are Rabbinic prohibitions for Jews in such circumstances. Thus Rav Kotler should not have bowed, while Truman’s speech – even according to the strict opinion – would still be permitted.
The author can be reached at yairhoffman2@gmail.com
ARTICLE PUBLISHED BY 5TJT
Posted by Just Another Hindu at 11:43 AM