Despite Vatican proclamations, professor of religion says Noahide Laws can't be found in the New Testament 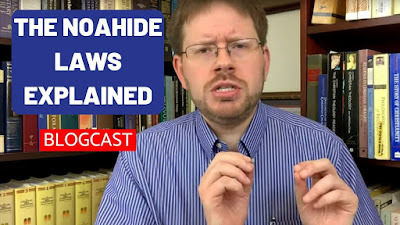 "James finally speaks on behalf of the “whole assembly” (Acts 15:12) and relates the mission to the Gentiles to a number of prophetic passages from scripture in which God calls the Gentiles to Himself (Acts 15: 16-18). James then states that Gentiles should be welcomed in if they maintain select dictates, which are similar to the Noachide laws (which Paul does not mention in Galatians 1-2) (Acts 15: 19-21) and, after “the apostles and the elders with the consent of the whole church” choose men to accompany Paul and Barnabas (Acts 15:22), James sends a letter to this effect to the church in Antioch (Acts 15: 22-29)."

The problem with discussing development and change in church teaching using the language of “conservatives” or “liberals” is not that differences among Catholics do not map broadly onto this template, but that it imports the political sense of a zero sum game: there are winners and losers and those with whom I disagree are my opponents. In the spirit of all of us belonging to one church, I want to offer some thoughts on how development has occured in church teaching, using examples from the New Testament.
This is offered as a response to some recent Ross Douthat columns, blog posts and Twitter discussions, particularly his requests that his interlocutors engage him in a discussion on the theological issues. One of the surprising aspects of Mr. Douthat's thought regarding the issues discussed at the recent Synod on the Family is that he seems to hold a fundamentalist view of Scripture, namely, that its sense is always plain. Scripture is not self-interpreting, though, but it requires the believing church. The positions taken by the Roman Catholic Church on divorce, remarriage and communion are not self-evident, but the product of numerous interpretive moves. Father Paul Keller gives excellent examples of these interpretive choices, so I will not cover a lot of the material he does but encourage you to read his post.
For instance, the Orthodox and Roman Catholic churches have interpreted Jesus’ teaching differently in one significant practical matter. Mark Silk points out that the Orthodox Church does allow second and even third marriages, but that a penitential path has to be followed prior to a second marriage, and this is the case even if the person seeking a second marriage is a widow or a widower, since one, indissoluble marriage is the ideal. On the other hand, in the Catholic Church, if a spouse dies, one can marry again with no questions and no problems. But given Catholicism’s understanding of the indissolubility of marriage, why should this be? Why should the death of one spouse end this marriage? There are arguments to be made for both Orthodox and Catholic positions, but that is the point: arguments and interpretations of the evidence must be advanced and different churches, neither of whom consider the other to be heretical, have taken different positions. Fr. Paul Keller also points out that the supposed strict indissolubility of marriage in the Catholic context is also limited by the Petrine and Pauline privileges.

One of the passages just noted, Matthew 19:3-12, also has an important reference to celibacy. In response to Jesus’ claim that divorce is not possible in marriage, except for porneia, Jesus’ disciples say, “If such is the case of a man with his wife, it is better not to marry” (Mt 19:10).  Jesus’ response to the disciples offers an enigmatic saying on eunuchs: “Not everyone can accept this teaching, but only those to whom it is given. For there are eunuchs who have been so from birth, and there are eunuchs who have been made eunuchs by others, and there are eunuchs who have made themselves eunuchs for the sake of the kingdom of heaven. Let anyone accept this who can” (Mt 19:11-12). Without question, this is an actual saying of Jesus.[8] But what does it mean?
What does it mean that “not everyone can accept this teaching”? Does it mean there is a choice among Jesus’ followers to accept or reject the teaching? Does it mean that only those who can accept it can be Jesus’ followers? (That was the position of the early Syriac Christian Church who only baptized celibates for the first few centuries.) The second clause, “but only those to whom it is given,” might indicate that only some followers of Jesus can accept the teaching regarding marriage and divorce or that only those who have had this insight given to them - by God? - are fit to be Jesus’ followers. It is unclear whether all of Jesus’ disciples should be single or if some have a choice to be married. The linking of the eunuchs to the kingdom of heaven, though, clearly indicates that the ideal of the single and celibate state is the state of all disciples in the eschatological Kingdom of God.
Jesus on Divorce:
If the eschatological context is pervasive for Jesus’ teaching on marriage, this, too, is the proper context for Jesus’ understanding of divorce. Jesus does not offer conservative Jewish teaching, but radical teaching, intended to promote sexual asceticism, a form of “self-control in imminent expectation of the kingdom of God.”[9] Jesus’ teaching on divorce is far more stringent than that of the rabbis, in which divorce was possible in most, even trivial, situations.
Jesus’ teaching is that marriage ought not be contracted more than once and divorce is not allowed, a form of the intensification of the Torah due to its messianic fulfillment and eschatological asceticism (Mk 10:2-12; Mt 5:31-32, 19:3-9; Lk 16:18). Matthew’s pericope, however, offers an exception clause, in which divorce is allowed if the wife commits porneia. This clause is not original to Jesus’ saying, and the basic outlines of Jesus’ teaching is modified: Jesus would prefer new marriages not be contracted, and existing marriages ought not to be ended, unless they were not truly marriages to begin.
I believe this exception clause was first concerned with marriages which ought not to have been contracted due to degrees of consanguinity outlawed by Leviticus and maintained later by the rabbis and does not concern adultery, though this is much disputed. [10] What we can say is that current Catholic Church teaching on annulments has moved much beyond any scholar’s interpretation of what porneia meant to the Matthean community in the first century, that is, technically incestuous marriages, adultery, or other sexual sins, to include numerous emotional and psychological conditions and situations. So the exception clause itself was a development of what Jesus said, namely, that since the eschaton is soon to arrive it is best not to divorce. But Matthew 5:32 and 19:9 say that marriages can end due to porneia andthat remarriage is possible if the divorce was due to porneia. And today the annulment process ends marriages even if porneia was not present and allows for remarriage.
Clearly, there has been development in teaching, practice, and interpetation. But Mr. Douthat raises a significant question: how do we know what is authentic development? The development which is in the New Testament is obviously authentic development, since it is part of the deposit of the faith. Yet, the Church teaches authoritatively, so development which takes place within the Magisterium also constitutes authentic development. Can there be no further development in teaching, practice, and interpetation regarding marriage and divorce?