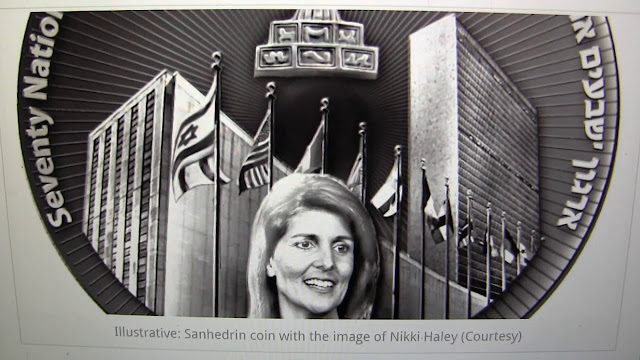 
On Sept 26th, 2019, the nascent Sanhedrin in Israel will be hosting a "70 Nations" conference on the supposedly universal "Biblical" (actually Talmudic - see here) values of the Noahide Laws. It is called the 70 Nations conference because there were supposedly 70 Nations which descended from Noah, and since we are all again supposedly descendants of Noah we are all "obligated" to keep the Seven Noahide Laws given to Noah in the Talmud, we must keep them on pain of beheading! Dignitaries and officials have been invited from around the world and many will be attending. Nikki Haley has been asked to be the honorary president of the organization, and even if she does not accept this offer she has still been minted a coin in her honor for her work in representing Israel at the UN. Interestingly enough, one of the objectives of the conference is to discuss the UN's inability to maintain peace and order as they are not compliant with the Noahide Laws. This is an interesting twist because the United Nations has already issued proclamations stating that the Noahide Laws are "obligatory" upon all mankind (here). Perhaps in replacement of the UN the conference aims to set up an international Noahide court. This Sanhedrin in Israel is not yet a fully legal body but it aims to be one, and one of their stated objectives is to see the fall of all non-Noahide religions on earth (here) and they are evangelizing and converting Noahides globally with the approval of the Israeli government (here). This same Sanhedrin recently requested that President Donald Trump uphold the Noahide Laws (here),  as this would seem to be his duty under American Public Law 102-14 which states the Talmudic Seven Noahide Laws are the foundation of American civilization and more (here). The Noahide Laws are Jewish laws which non-Jews are commanded to obey. These laws limit freedom of religion, freedom of speech, and freedom of sexual expression to what is approved by orthodox religious legalistic Jewry, on pain of death.

“And the many peoples shall go and say: “Come, Let us go up to the Mount of Hashem, To the House of the God of Yaakov; That He may instruct us in His ways, And that we may walk in His paths.” For instruction shall come forth from Tzion, The word of Hashem from Yerushalayim.” Isaiah 2:3 (The Israel Bible™)

Two types of shofars were blown: bent ram’s horns and straight ibex’s horns. (Elan Shecter)
FacebookTwitterEmailWhatsAppPrintShare1,847
On September 26, the Sanhedrin will be hosting the first conference of the Organization of 70 Nations at which representatives of several nations will attend. The conference is to bring together all of the nations under the common belief in the sanctity of the Bible and the sanctity of all of mankind. The members of the organization agree to the sanctity of Jerusalem and the Temple’s, as well as the sanctity of God’s covenant established with all of mankind through Noah. Every nation and ethnic group who sees itself as part of humanity and therefore accepts responsibility to join in a universal covenant of brotherhood of peace is invited to take their place in this Organization of 70 Nations.”
The concept of 70 nations is taken directly from the Bible.
“God established the borders of the world based on the 70 children of Israel who went down to Egypt and the 70 nations that came out from Noah,” the Sanhedrin’ proclomation explained. “The concept of 70 Nations is from the Bible and symbolizes the basis for the organization while not being intended to imply a limit or requirement for participation.”
The concept of 70 nations also appears in reference to the 70 oxen offered in the Temple throughout Sukkot (the feast of the tabernacles) which the Talmud (Sukkah 55b) teaches are for the merit of the 70 nations.
The conference will address the inability of the United Nations to maintain peace among the nations. Included in this are the actions of the UN that contravene the Noahide principles that are the basis upon which humanity exists. One example of this is the UN agenda to promote abortion and euthanasia as “human rights.”
Other things on the agenda
The conference will also address the actions of the UN against Israel and the Biblical covenant that grants the land to the Jewish people.
The attendees will also address the Joint Comprehensive Plan of Action (JCPOA), known commonly as the Iran nuclear deal or Iran deal, which enabled Iran, an openly aggressive power and state sponsor of terrorism, to advance its nuclear weapons program while funding terrorism.
The mission
The Organization of 70 Nations is expected to enable cooperation towards economic and social programs that will benefit all mankind. Included in this will be an international court based on Biblical principles. The court will be granted the mandate to protect the globe from ecological threats, mobilizing resources to stop hunger and advance agriculture, and advancing medicine for the good of all mankind.
The organization emphasizes that every nation will keep its unique and distinct national identity, cultural heritage, language, and recognized borders.
The invitation was signed by the members of the Sanhedrin which included Rabbi Hillel Weiss, the spokesman, and Rabbi Dov Stein, the secretary.
Who’s attending?
Several nations have already expressed their intention to attend. Representing Guatemala, Vice president of the Republic of Guatemala Jafeth Ernesto Cabrera Franco as well as several of his advisers. There will also be official delegations from El Salvador, Mexico, Honduras, Bolivia, Trinidad Tobago, and Costa Rica. Several of the delegates are parliamentarians of their respective countries.
The invitations were presented to the South American countries by Devora Luquer, head of the Hallel Foundation.
“The people in the government were immediately receptive and open to the idea of an international organization based on Bible principles,” Luquer told Breaking Israel News. “They perceived this as a return to their roots as a nation and as an individual.”
Luquer noted that such an organization must necessarily be based in Jerusalem, citing Isaiah as her source.

In recognition for her battle against bias and prejudice in the UN,  the Sanhedrin invited former US Ambassador to the UN Nikki Haley to serve as the honorary president of the Organization of 70 Nations. Though Haley has yet to respond to the invitation, the Sanhedrin issued a commemorative coin to honor her accomplishments.
A musical performance
The conference will be preceded by a World Creation Concert held on September 25 (the 25th day of the Hebrew month of Elul) which,  according to Jewish tradition, will be the 5779th anniversary of the creation of the world. The concert will feature a musical presentation of a selection of Psalms that comprise the Hallel, a prayer service praising God.
This will be the second concert of its kind. Last year, a World Creation Concert was held adjacent to the Temple Mount. During a ceremony held at the concert, representatives from Honduras, Guatemala, and Mexico signed an agreement with the Sanhedrin to accompany the people of God, as peoples, nations, and individuals toward establishing the Temple in Jerusalem as a house of prayer for all nations as prophesied in the Bible.
Posted by Just Another Hindu at 12:17 PM