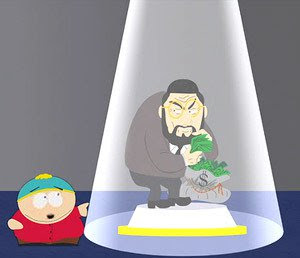 Under Noahide Law, non-Jews may not steal or commit murder on pain of death, but Jews may steal from and murder non-Jews without earthly penalty (here). Why this biased and unfair legal system? A Jewish literary critic named Adam Kirsch has provided us with the reason why this is, at least according to his knowledge. According to Kirsch, the god of the Jews gave non-Jews the Noahide commandments, but they broke them, so they deserve to have their items stolen by Jews. Another legend is that the Jewish god offered all the people of the earth the Torah, but only the Jews took it, so they are given the privilege of stealing from non-Jews.

Rather than remedy this injustice, however, the Gemara attempts to justify it. According to Abbahu, God “arose and permitted their [the gentiles’] money to the Jewish people.” The reason for this, he explains, is that after the Flood, the sons of Noah received what are known as the Noahide commandments—seven laws that are binding on all human beings, including laws against theft and murder. Because the non-Jewish peoples did not obey these laws, God punished them by allowing Jews to take their property. (Although one might note that the Israelites notoriously failed to uphold their own laws on many occasions.) Rabbi Yochanan gives an alternate explanation, based on the legend that God offered the Torah to all the peoples of the Earth, but only the Jews accepted it. Thus the other nations deserve to have their goods taken by the Jews.

One Law for Jews, Another Law for Gentiles

In this week’s ‘Daf Yomi,’ non-Jews are denied equal protection under the rules of the Talmud