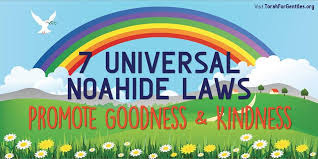 The 6th Noahide Law is that one may not eat the limb cut from a living animal. Because growing lab-grown meat requires taking a cell from a live animal, some Rabbis have concluded that even non-Jews cannot eat lab-created meats under the Noahide Laws. Doesn't this sound anti-science and getting in the way of technology that could reduce the suffering of animals?

The Cells The scientist extracted the cells of a real animal and used them to grow the tissues in a Petri dish. If, and that is not a small if, the mere cells are considered substantial enough to be called meat, this may present a problem. In addition to the prohibition of eating a limb from a living animal,8 there is an additional injunction not to eat any meat that was severed from a live animal.9

This is an issue for non-Jews as well as Jews, since Noahide law dictates that non-Jews may not eat even a minute amount of meat that was separated from a living animal

Is the Lab-Created Burger Kosher?
The halachic status of lab-created meat
By Yehuda Shurpin


Question:
Scientists have recently demonstrated that they can now take stem cells from a cow and build them into hamburgers that look, feel and (almost) taste like the real thing. What does Jewish law have to say? Is this considered real meat? Is it kosher?
Response:
This is a fascinating question that needs to be studied carefully by expert rabbis when the issue becomes more practical and Petri-dish burgers become an affordable option. But here are some preliminary thoughts on the subject to give you some perspective.

What makes this question so intriguing is that this is an example of how those seemingly fantastic Aggadic tales in the Talmud are nowadays becoming a starting point for new halachik questions.
There is actually a discussion in the Talmud about whether meat that does not come from an animal is considered kosher, although the origin of the meat in this case was even more miraculous:

A story of Rabbi Shimeon ben Chalafta, who was walking on the road, when lions met him and roared at him. Thereupon he quoted from Psalms: “The young lions roar for prey and to beg their food from G‑d,”1 and two lumps of flesh descended [from heaven]. They ate one and left the other. This he brought to the study hall and propounded: Is this fit [for food] or not? The scholar answered: “Nothing unfit descends from heaven.” Rabbi Zera asked Rabbi Abbahu: “What if something in the shape of a donkey were to descend?” He replied: “You ‘howling yorod,2’ did they not answer him that no unfit thing descends from heaven?”3

Miraculous meat appears again in the Talmud, although this time it was man-made:

Rabbi Chanina and Rabbi Oshaia would spend every Sabbath eve studying the “Book of Creation”4 by means of which they created a calf and ate it.5

In discussing this story, later commentators debate whether such an animal would require shechitah (kosher slaughter) in order to be eaten.
Rabbi Yeshayah Halevi Horowitz, known as the Shelah, writes that it is not considered a real animal and does not need shechitah.6
Others write that while a technical interpretation of Biblical law may not require such an animal to be slaughtered, the rabbinical prohibition of “marit ayin” (not engaging in acts that look misleadingly similar to forbidden activity) would necessitate slaughter—lest an onlooker think that ordinary meat is being consumed without shechitah.7

So far we have discussed “miracle meat” that came from heaven or was created by spiritual means. Some commentators defined this meat as miraculous because it did not come from a naturally-born animal. But do we consider any meat that does not come from a naturally-born animal to be “miracle meat”? Or does it need to come through an actual miracle? How about test-tube meat, which does come from actual animal cells? In this case the dictum that “no unfit thing descends from heaven” obviously would not apply. Here are some of the issues that will need to be explored:
● The Cells The scientist extracted the cells of a real animal and used them to grow the tissues in a Petri dish. If, and that is not a small if, the mere cells are considered substantial enough to be called meat, this may present a problem. In addition to the prohibition of eating a limb from a living animal,8 there is an additional injunction not to eat any meat that was severed from a live animal.9
This is an issue for non-Jews as well as Jews, since Noahide law dictates that non-Jews may not eat even a minute amount of meat that was separated from a living animal.10
For Jews, if the cells are considered real meat, then presumably they would need to be extracted from a kosher animal that was slaughtered according to Jewish law.
Another consideration is that there is a halachik concept, “the product of non-kosher is itself not kosher, and the product of that which is kosher is itself kosher.”11 While at first glance this would seem to imply that the cells need to come from a kosher source, it is not clear whether the above rule would apply to microscopic cells that were extracted from an animal.
● The Product In Jewish law, a food that contains only a minuscule amount of a non-kosher ingredient can still be considered kosher if the non-kosher ingredient is nullified (usually) by at least a factor of 60 to 1. At first glance it would appear that we can apply this rule to our scenario, since the original cells are greatly outnumbered by the “meat” produced. However, halachah states that the above rule does not apply to a “davar hama’amid,” an ingredient that establishes the form of the item. The essential ingredient can never be nullified, no matter how small it is.12 It would seem that the same rule applies to the cells that are essential to growing the meat. If they don’t come from a kosher source, they can never be nullified, and whatever is created with them is also not kosher.
As noted earlier, these are just preliminary thoughts on the subject. Any halachik ruling would have to come from rabbis who are expert in these matters.
FOOTNOTES
1.

Rashi explains that this is a species of bird that always seems to be wailing and mourning. Some commentators explain that he meant to admonish his student Rabbi Zera for his excessive asceticism. Rabbi Abbhu felt that the many fasts that Rabbi Zera undertook had taken a toll on his clarity of mind, this being an example of it, see Chavos Ya’ir 152.
3.

A Kabbalistic work ascribed to Abraham our forefather.
5.

Shalaha Parshas Vayeishev. He cites this piece of Talmud in relation to the episode of the selling of Joseph by his brothers, which, some explain, was a punishment to Joseph. Thinking that he had seen the brothers eat the limb from a living animal, he went and tattled to his father. However, the Shelah explains that in fact the animal they ate was similar to the one described in the Talmud here, and therefore it did not required slaughter and was also not an issue of Eiver Min Hachai.
7.

Maimonides laws of kings 9:10. For more on the seven Noahide laws, see The Seven Noahide Laws
11.

By Yehuda Shurpin
A noted scholar and researcher, Rabbi Yehuda Shurpin serves as content editor at Chabad.org, and writes the popular weekly Ask Rabbi Y column. Rabbi Shurpin is the rabbi of the Chabad Shul in St. Louis Park, Minn., where he resides with his wife, Ester, and their children.
Posted by Just Another Hindu at 11:21 AM