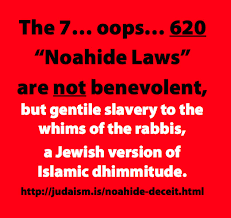 Are you familiar with the "Noahides"? Noahides, or "B'nai Noach/Children of Noah," are non-Jews who commit themselves to living by the Seven Noahide Laws, which were derived by the Talmudic Sages from this week's Torah Portion.

The Parashah for the week is Noach, Genesis 6:9-11:32. This reading, the second Sidrah in the first Book of the Torah, contains the story of Noah and the Flood. In the aftermath of the Deluge, Scripture states that,

"God blessed Noah and his sons, and said to them, ‘Be fertile and increase, and fill the earth. The fear and dread of you shall be upon all the beasts of the earth and upon all the birds of the sky-everything with which the earth is astir-and upon all the fish of the sea; they are given into your hand. Every creature that lives shall be yours to eat; as with the green grasses, I give you all these. You must not, however, eat flesh with its life-blood in it. But for your own life-blood I will require a reckoning: I will require it of every beast; of humanity, too, will I require a reckoning for human life, of every one for that of another person! Whoever sheds human blood, by humans shall his blood be shed; For in the divine image did God make humanity. Be fertile, then, and increase; abound on the earth and increase on it." [Genesis 9:1-7.]

The Talmud tells us, "Our Rabbis taught, Seven precepts were the children of Noah commanded: to establish courts of law, to refrain from blasphemy, idolatry, adultery, bloodshed, robbery, and eating flesh cut from a living animal." [Sanhedrin 56a end.] Noahides accept and affirm this rabbinic interpretation "as a system of Moral Standards and Justice for all mankind... a code of conduct through which a relationship with God can be established and an ethical code of conduct in dealing with your fellow man" [http://noahides.tripod.com].

The Noahides originated in the 1980s in Cleveland, Tenn. led by Jack Saunders, then a Baptist minister. Primarily rural and small town folks, the Noahides are widespread although they especially are present in communities in Tennessee, Texas and Oklahoma. Like Saunders and his congregation, they no longer identify as Christians. While some Noahides have converted to Judaism, most trace their spiritual ancestry back to Noah and see themselves as gentiles seeking to live a God-fearing, moral life.

Noahides are profoundly influenced by Jewish thought and deem Orthodox rabbis their primary teachers. Many Noahides abstain from eating pork, honor Shabbat, and celebrate Sukkot. They believe that "From 7, we get 66," that is, that the Seven Noahide Laws yield 66 specific commandments by which they must live to be properly connected to God and to other human beings.

I find the Noahides fascinating. Over the years, many Jewish men and women have informed me that to be "a good Jew" one need do nothing more than be "a good person."

Rabbi Lane Steinger serves Shir Hadash Reconstructionist Community and is a member of the St. Louis Rabbinical Association.
Posted by Just Another Hindu at 5:36 AM