Chabad-Lubavitch teaches the King of Morocco about the Noahide Laws 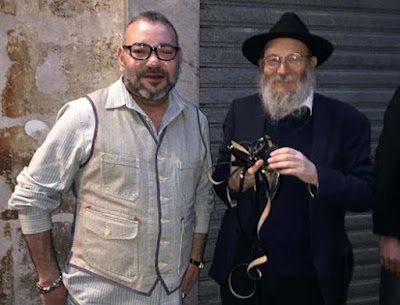 Chabad-Lubavitch is perhaps the most radically Noahide evangelistic organization on earth, with many attempts and organization to convert non-Jews to Noahidism. There have been many attempts recently to fuse Noahide Law and Sharia Law together into one (here, here, here & here).While walking through the streets of his nation the King of Morocco, Mohammed VI, was encountered by a Chabad Rabbi who told him about the Noahide Laws. Who knows if the king took this to heart, but if he did, and he catches on to the Noahide-Sharia connection, this could be a bad alliance for non-Jews.

The King and the Rabbi


For decades, emissaries of the Chabad-Lubavitch movement have set up tefillin stands in universities and at street corners around the world, looking to encourage Jewish passersby to put on phylacteries.

One such tefillin stand in Paris received a most unusual visitor on Monday, when a middle-aged tourist from Morocco approached the stand and began chatting about the Lubavitcher Rebbe.

As Chabad emissary Israel Goldberg soon learned, the visitor was not the run-of-the-mill tourist, but Mohammed VI, the King of Morocco.

The king, who recently underwent heart surgery in Paris, has been snapping pictures with locals over the past few weeks, and on Monday decided to drop by the Chabad-Lubavitch center at 17 rue des Rosiers. After purchasing glasses at a shop there, the king chatted with Goldberg, who was operating a nearby tefillin stand.

According to Goldberg, the two discussed the Lubavitcher Rebbe, the Seven Noahide Laws laid out in the Bible, and the importance of charity in Judaism.

“I had the honor this afternoon to transmit the seven universal principles – Noah’s seven laws – to His Majesty the King of Morocco, who had symbolically come to buy a pair of glasses at Jonathan’s, at 17 rue des Rosiers, a building where the Lubavitch synagogue is located that is also the oldest of Paris,” wrote Goldberg.

The two recited a Hebrew blessing together and discussed the practice, advocated by the Lubavitch Rebbe, of daily meditation.

“He was very touched to hear our blessings,” continued Goldberg.
Posted by Just Another Hindu at 5:35 AM