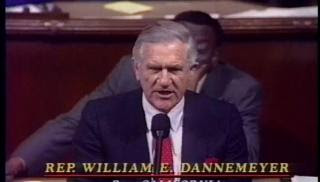 The Advocate is a gay publication which presumes to speak for gay rights (unlike the Noahide Laws).  This year, Congressman William Dannemeyer, an anti-homosexual, died. Who was Willian Dannenmeyer and what is his relevance to the Noahide Laws?  It is perhaps only because of Mr. Dannemeyer that we know Public Law 102-14, which recognizes the Noahide Laws as the foundation of American civilization, was passed with the vote of only 4 congressmen (here)! In a letter Dannenmyer wrote, he gave his testimony that Public Law 102-14 was passed with the consent of four congresspersons: Thomas Sawyer (D-OH), Thomas Ridge (R-PA), Benjamin Gilman (R-NY) and Minority Leader Robert H. Michel, if it were not for Dannenmyer we may have never known this very pertinent fact. The Advocate smears Dannenmyer for his accusation that Public Law 102-14 inserted proclamations that are dangerous for non-Jews and they said Public Law 102-14 is innocuous. Perhaps the Advocate should know that homosexuals are to be killed under the Noahide Laws (here)... how innocuous does it sound now? Is killing gays the "foundation" of America?


He once wrote a column contending that an innocuous resolution passed by Congress in 1991, recognizing March 26 as Education Day and honoring a prominent rabbi, “was nothing less than a secret, under-handed plot to control the American people by the Noahide Laws — a subterfuge for the elimination of Christianity, the elimination of all Christians, and the enslavement of all remaining ‘Gentiles.’”

William Dannemeyer, Leading Homophobe of His Era, Dead at 86 The seven-term congressman publicly wished for the elimination of all people with HIV and promoted many other hateful views.
BY TRUDY RING
JULY 11 2019 3:11 PM EDT

Seven-term Congressman William Dannemeyer, one of the leading homophobes of the 1980s and ’90s, has died at age 86.
The California Republican, who once read a description of sexual acts into the Congressional Record, said he’d like to wipe out all HIV-positive people, and spread false claims about how HIV was spread, died Tuesday after suffering from dementia, The Orange County Register reports. In addition to his antigay activism, he promoted conspiracy theories about Bill and Hillary Clinton and claimed that Jews were seeking to eliminate Christians.
Dannemeyer represented an Orange County district in the U.S. House from 1979 to 1993. The county, located between Los Angeles and San Diego, was once a bastion of the extreme right, electing homophobes like state legislator John Briggs and Congressmen Bob Dornan and Dana Rohrabacher in addition to Dannemeyer. Now the county is much changed. A majority of its voters went for Hillary Clinton in the 2016 presidential election, and the 2018 midterm election brought it an entirely Democratic congressional delegation.
Dannemeyer was once a Democrat but switched parties in 1970, saying the Democratic Party had become too liberal. In the California Assembly and then in Congress, he soon demonstrated that he was anything but liberal.
“In the mid-1980s, Dannemeyer endorsed a plan to quarantine people with HIV or AIDS,” the Register’s obituary notes. “He also spoke against allowing nurses with HIV to work with children, saying (incorrectly) that people with the virus emitted a ‘spore’ that caused birth defects.”
In 1989 he placed a detailed description of sex acts in the Congressional Record; he characterized them as gay sex acts, even though heterosexuals were known to engage in some of them as well. The same year, he sent a letter to President George H.W. Bush expressing concern about the influence of gay people in the administration. Dannemeyer was a fan and ally of President Ronald Reagan, less so of fellow Republican Bush. He also published a book that year, Shadow in the Land: Homosexuality in America, about what he considered the threat posed by gay people.
In 1990 he voted against a bill authorizing the federal government to collect data on crimes motivated by a victim’s race, religion, sexual orientation, or ethnicity. He was one of only 18 House members to oppose it; he said he did so because it put sexual orientation on a par with those other characteristics.
The next year he was one of the few to oppose one of the most popular bills of the first Bush administration, the Americans With Disabilities Act, which banned discrimination against people with disabilities, including HIV. In 1992 The Advocate bestowed its Sissy Award on him for his expressed wish that all people with HIV would perish from the earth.
His ultraconservative stances, which also included opposition to abortion and support for a balanced federal budget, got Dannemeyer reelected six times, never with less than 65 percent of the vote, according to the Register. He left the House only to run for U.S. Senate in 1992, but he lost the Republican primary to John Seymour, who in turn lost the general election to Democrat Dianne Feinstein. Dannemeyer ran for Senate again in 1994, losing the primary to Michael Huffington, who later came out as bisexual. Huffington also lost to Feinstein, who won her first full term (the 1992 race was a special election to fill out the remainder of the term of Pete Wilson, who had left the Senate to become California’s governor).
After leaving Congress, Dannemeyer continued to push his far-right views. He advocated for a constitutional amendment to allow organized prayer in public schools, and he wrote a letter to the U.S. House urging an investigation into the deaths of 24 people connected to Bill and Hillary Clinton who had died “under other than natural circumstances,” according to the Register. The Clintons were not involved in the deaths, and no investigation was launched.
Dannemeyer’s first wife, Evie, died in 1999, and five years later he married Lorraine Day, a physician noted for questioning the Holocaust and claiming that Jews were seeking to destroy Christianity. Dannemeyer embraced some of these views. He once wrote a column contending that an innocuous resolution passed by Congress in 1991, recognizing March 26 as Education Day and honoring a prominent rabbi, “was nothing less than a secret, under-handed plot to control the American people by the Noahide Laws — a subterfuge for the elimination of Christianity, the elimination of all Christians, and the enslavement of all remaining ‘Gentiles.’”
Posted by Just Another Hindu at 2:07 PM