Rabbi: Even Noahides can't be buried with Jews because of the difference in sanctity between Jews and non-Jews 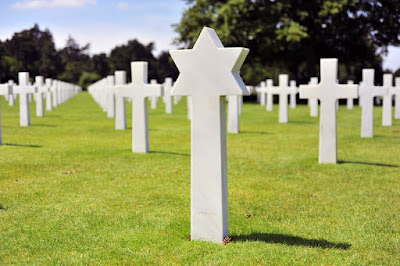 The Noahide Laws set up two sets of law, one law for the Jews, and one law for the non-Jews (Noahide Law). Jews and non-Jews are unequal before the law as a non-Jew only need one victim to their so-called crime of idolatry, blasphemy, or forbidden sexual relations to be put to death, while Jews need two or three witnesses; Jews are allotted more judges than non-Jews (who only get one Judge), also Jews have more legal protections under the laws against theft than non-Jews do (here). Many people have heard that Jews have their own graveyards in which non-Jews cannot be burried. One Rabbi in an article published in the Jewish Press says that this has nothing to do with morality, he says even a non-Jew following the Noahide Laws cannot be buried with Jews, and he says this is because of the difference in sanctity between Jews and non-Jews. Even if you follow the Noahide Laws, you will never be as sacrosanct as a Jew.


May Non-Jews Be Buried In Jewish Cemeteries?

Two weeks ago, on November 4, six Palestinians workers were killed in a car crash on Route 90 in the Jordan Valley. Alah Kirsh, one of the causalities, was not allowed to be buried in an East Jerusalem Muslim cemetery, as he was accused of selling real estate to Jews several years ago.
Ekrima Sa’id Sabri, the Grand Mufti of Jerusalem, also prohibited bringing the body to the Al-Aqsa Mosque, citing a 1935 fatwa from Amin al-Husseini denying Muslim burial to those who sell a home or land to Jews.
Upon hearing of the family’s difficulty finding a proper burial place for Kirsh, Jerusalem’s Ashkenazic Chief Rabbi, R. Aryeh Stern, ruled that Kirsh may be buried in Har Hamenuchot. He insisted that “we must correct the distortion of justice and unjust humiliation of a man whose only sin was being prepared to sell land to Jews.”
Kirsh was ultimately buried in a section of Har Hamenuchot reserved for people “without religion.” This incident, though, raises a larger question: May a non-Jew be buried among Jews in a Jewish cemetery?
The Talmud (Gittin 61a) states: “We bury dead gentiles along with dead Jews because of the ways of peace (darchei shalom).” Rashi writes that the Gemara means we bury them together if we find them together. But according to the Ran (ibid., 28a, s.v. “kovrin”), we bury non-Jews with Jews even if we find the bodies of gentiles by themselves.
The Rambam (Hilchot Melakhim 10:12) writes that we are commanded to bury non-Jews with Jews, quoting the following verses: “The Lord is good to all and His mercy extends to all of His creations” (Tehillim 145:9) and “Its ways are the ways of pleasantness and all its pathways are peace” (Mishlei 3:17).
The Rambam maintains that darchei shalom in this context does not mean we tend to the burial of gentiles so that gentiles protect the rights of Jews. Rather, we bury gentiles with Jews as an expression of our broader obligation to engage in acts of kindness (gemilut chassadim).
Generally speaking, however, Jews do not bury gentiles in Jewish cemeteries – perhaps following Rashi’s interpretation of the Gemara. In explaining this practice, the Ran cites the Gemara (Sanhedrin 46a) which states: “a wicked man is not buried next to a righteous man…. And just as a wicked man is not buried next to a righteous man, so too, an extremely wicked man is not buried next to a less wicked man.”
Based on this rule, the Gemara states that those executed by beis din are not buried next to regular people, and even those executed by beis din are not buried next to other people executed by beis din who incurred a different punishment.
The Ran does not mean to imply that gentiles are wicked. Indeed, R. Moshe Feinstein (Igros Moshe, Yoreh De’ah 3:146) writes that even a gentile who observed the seven Noahide laws is not buried in a Jewish cemetery. Clearly, then, our practice is not based on the piety of individual gentiles versus individual Jews but on the distinction between the sanctity of the Jewish people (kedushat Yisrael) as a whole and that of other nations.
Interestingly, the Targum translates/interprets Ruth’s declaration to Naomi, “Wherever you die, I will die, and there I will be buried” (1:15), as “Ruth said: However you die, I will die. Naomi said: We have separate cemeteries. Ruth said: And there I will be buried.” Thus, according to the Targum, the practice of Jews and non-Jews being buried separately dates all the way back to the days of the Judges.
Are there circumstances in which burying a gentile together with Jews is permissible? R. Yoel Sirkis (Bach 151) writes that if Jews and gentiles are found dead together, they may be buried together as per the Gemara’s statement quoted above.
What about the non-Jewish spouse or children of a Jew? May they be buried in a Jewish cemetery? What about a non-Jew who was converting to Judaism but passed away before completing the process? What about someone who considers himself Jewish but was not converted properly? Poskim have dealt with all these scenarios (see Minchas Elazar 3:8 and Igros Moshe, Yoreh De’ah 1:160, 2:149, 3:147).
Considering the sensitive nature of these questions, R. Moshe Feinstein adopts a somewhat lenient approach, and requires a separation of only eight amos or, if not possible, four amos between the burial spot of a non-Jew and a Jew. He also permits erecting a small, 10-tefachim-high fence in between them. R. Yechiel Yaakov Weinberg (Seridei Esh 3:100) permits burying non-halachic converts in a separate row in a Jewish cemetery where non-Jews generally would not be permitted to be buried.
In Israel, the question of burying non-Jews in Jewish cemeteries comes up in regards to the many immigrants from the former Soviet Union whose Jewish status is unclear (safek yehudim). It also arises concerning non-Jewish IDF soldiers killed in combat defending the State of Israel.
R. Shlomo Goren (1917-1994), Chief Rabbi of the IDF, and later the third Ashkenazic Chief Rabbi of Israel, permitted, at least theoretically, burying a non-Jewish soldier in a Jewish military cemetery (Terumas HaGoren 1:27, 2:79). R. Goren contends that gentiles who fight for the nation and land of Israel are even greater than righteous gentiles (chasidei umos ha’olam) who have a portion in the World to Come.
Some cite the Talmud (Bava Batra 10b), which states that “no creature can stand” in the heavenly section of Papos and Luliyanus – who were killed defending the Jewish people – as a precedent for this ruling. In practice, special sections have been set aside in Israeli civilian and military cemeteries for non-Jews.
Posted by Just Another Hindu at 11:33 AM