The Poway synagogue shooting has already been used as a platform to promote the Noahide Laws (here). Now the Poway Rabbi has brought the message of the Noahide Laws to the United Nations; even though the UN has already affirmed the Noahide Laws as obligatory (here). The Poway synagogue Rabbi, Rabbi Yisroel Goldstein, was the guest of Israel’s Ambassador to the United Nations, Danny Danon, this was official. Not only did Rabbi Goldstein tell the United Nations to adopt the Noahide Laws as a means to peace, but he also used the occasion to bring attention to anti-Semitism... how could this Rabbi bring up anti-Gentile (anti-non-Jew) Noahide Law and anti-Semitism together, can't he see how ironic this is? Worse, seeking to quell hatred of Jews around the world, he asked the members to seek the advice of Rabbi Menachem M. Schneerson, a man who said non-Jews have inferior satanic souls and only exist to serve Jews as property (here). When are we going to stop tolerating this? 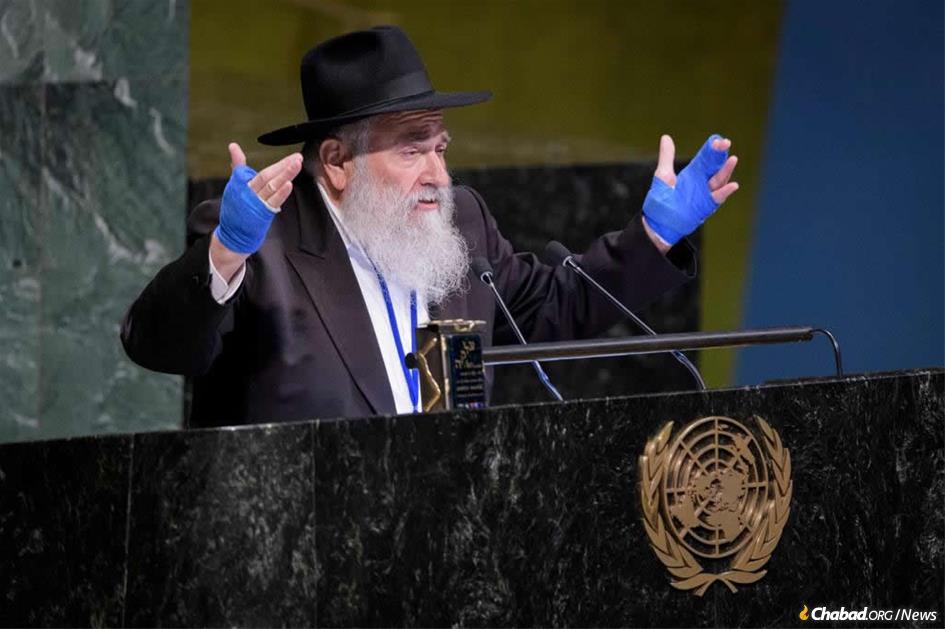 Rabbi Yisroel Goldstein addressed a special session on anti-Semitism at the U.N. General Assembly on June 26. (Photo: Permanent Mission of Israel to the United Nations)


Speaking powerfully and emotionally at the U.N. General Assembly on June 26, Rabbi Yisroel Goldstein, who was seriously injured in an anti-Semitic attack on his synagogue in Poway, Calif., urged representatives and guests from around the world who were participating in a special session on anti-Semitism to take inspiration from the Rebbe—Rabbi Menachem M. Schneerson, of righteous memory. He called upon his audience to remind themselves and others that “we are all inherently good, and that we each have the potential to change the world for the better, one good deed at a time.”

After recounting the harrowing details of the attack on his congregation, and the senseless murder of congregant Lori Gilbert-Kaye, Goldstein powerfully asserted the invincibility of the Jewish people. He emphasized the importance of taking a proactive and proud approach to fighting hate, and of sharing a positive, hopeful and unapologetic message with the world. He noted that his congregation modeled these sentiments beginning just minutes after the attack, and later, in the days and weeks following the tragedy.

He shared how within two hours of the shooting, the congregation regrouped in a community member’s home to finish the Passover prayer service “to show that nothing, nothing will ever stop us,” eliciting rousing applause from the U.N. audience.

“We must never react with defeatism, which simply rewards evil and feeds darkness; our fear of evil only feeds and animates it,” said Goldstein, who spoke about an exemplary public-school student in the Chicago suburbs who donned a skullcap at his middle-school graduation ceremony in late May on the way to receiving his diploma. “Instead, we must remain strong, and practice our faith even more openly and more brazenly, and become even brighter agents of light.”

“That is exactly what a 14-year-old child did shortly after the attack at our synagogue,” Goldstein said about student Mitchell Leshchiner. “As he walked up to get his diploma, he took out his kippah and put it on his head without shame or fear because that is how we react to darkness. The subsequent images of Mitchell proudly wearing the kippah were flashed around the world on social media and on the Internet.”

The Importance of Universal Principles

Echoing the words of a speech prepared for presentation at the United Nations in 1987 and edited by the Rebbe, Goldstein spoke about the moral duty to educate the world about the universal ethical principles, known as the Noahide Laws, which were the bedrock of societies that survived and thrived since the dawn of civilization.

“The Rebbe writes about the power of the United Nations,” said Goldstein. “All of you here have been given by G‑d an opportunity to make a difference in the world. The Rebbe taught us something very poignant. That indeed when the world was repopulated after the flood with Noah, G‑d gave seven laws called the Noahide Laws.”

Goldstein called these laws “the bedrock of any civilization that was to exist.”

He suggested that if only the United Nations will go back to the basics, and inspire and empower member nations to adopt the seven Noahide Laws, then “this world would be a very different world, and perhaps we wouldn’t have lost 150 million lives that we have lost in the last 200 years. So I ask every nation that is here, everyone listening, consider taking the seven Noahide Laws back to the basics and apply them to real daily life, and we will see a world of difference.”

Goldstein attended the meeting as a guest of Israel’s Ambassador to the United Nations Danny Danon, whose diplomatic efforts to promote the cause of combating anti-Semitism led to the convening of the meeting. The rabbi was subsequently invited to keynote the meeting by General Assembly President María Fernanda Espinosa Garcés, who stated in the invitation that the “meeting is intended to promote a reflection on how we, the United Nations, can work together to mitigate the pervasiveness of dangerous hate speech” and to ensure that social media platforms are used “to promote shared values, tolerance and mutual respect.”


Goldstein said the tragedy further inspired him to resolve to use social media even more effectively, “the same technology that inspires terrorists,” to bring more light and good to the world. He urged the gathering to use its influence to inspire people around the world to join a campaign of “a billion good deeds,” as the surest way to combat anti-Semitism and all forms of hatred and bigotry.

On the podium, as he spoke, was an artful pushka, or charity box, and the rabbi put a folded dollar bill in the small box, stressing the importance of charitable “living” over charitable "giving,” a lifestyle the Rebbe championed, encouraging people to have a charity box at home and at work, and to give charity daily.

Goldstein noted how on the day of the attack on his synagogue, the last day of Passover, a prophecy of Isaiah is read where, the rabbi noted, “it talks about a perfect world, the world when Moshiach will come, when the Messiah will arrive, and it talks about the world when the wolf and the lamb will dwell together, a world that everyone would love each other, that the knowledge of G‑d would be everywhere.”

On the day that he was shot by an anti-Semitic gunman, “I was getting ready to read that. I was excited to read that because the world needs to be a better world. We need to welcome a new era that we have been praying for, for 2,000 years.”
Posted by Just Another Hindu at 1:59 PM